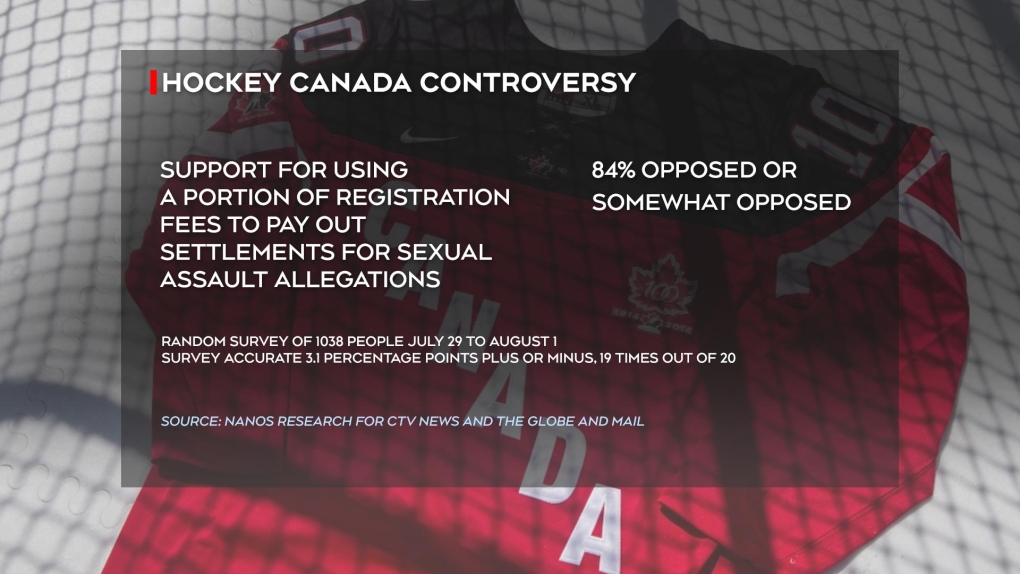 A new survey by Nanos Research is shedding light on the impact Hockey Canada’s handling of sexual assault allegations is having on the organization and the sport.

A majority of Canadians said they feel angry a portion of player registration fees were used by Hockey Canada to maintain a fund for uninsured payments, including for sexual assault settlements.

“When you’re paying fees you’re hoping that it’s going towards things that are directly benefiting the children and obviously that doesn’t benefit the children,” said Marcia Novo, a hockey parent of three sons from The Pas, Man.

The survey of 1,038 people commissioned by CTV News and The Globe and Mail found 84 per cent were opposed or somewhat opposed to using a portion of fees to pay out settlements for sexual assault allegations.

Seventy-three per cent said they feel anger about the situation.

The way it handled group sexual allegations made against some members of the 2018 Canadian World Junior hockey team, a lawsuit the organization settled in May with the woman who came forward before fully investigating the matter, has also come under scrutiny. 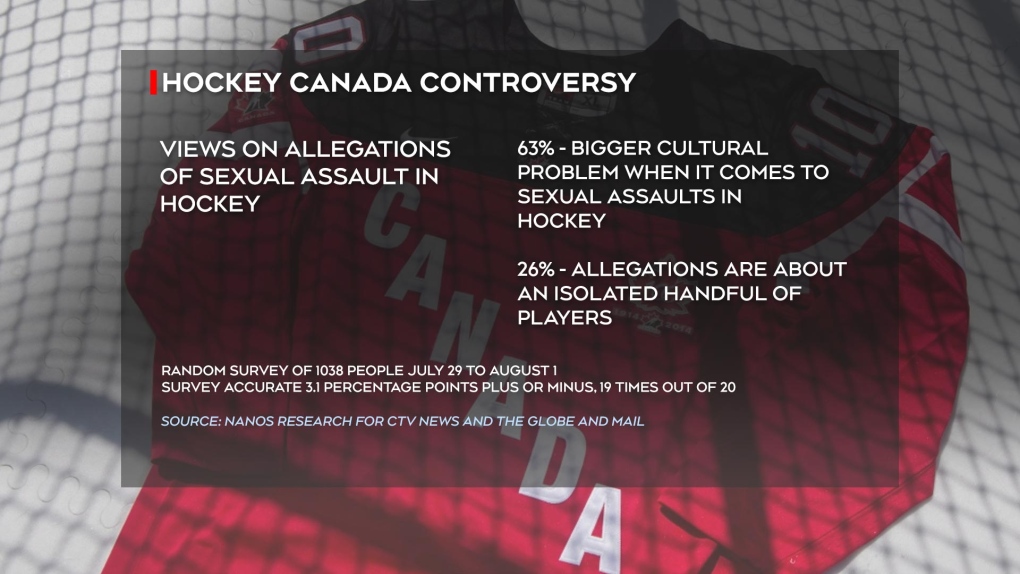 “It suggests that this particular issue is a major issue and that it has had a materially negative impact on how Canadians view hockey players and it’s quite significant considering how important hockey is to Canadians,” Nanos told CTV News Channel.

Fifty-nine per cent of respondents said they view sexual misconduct as a possible cultural problem in player development leagues that feed the NHL while only 11 percent said it’s not a problem. 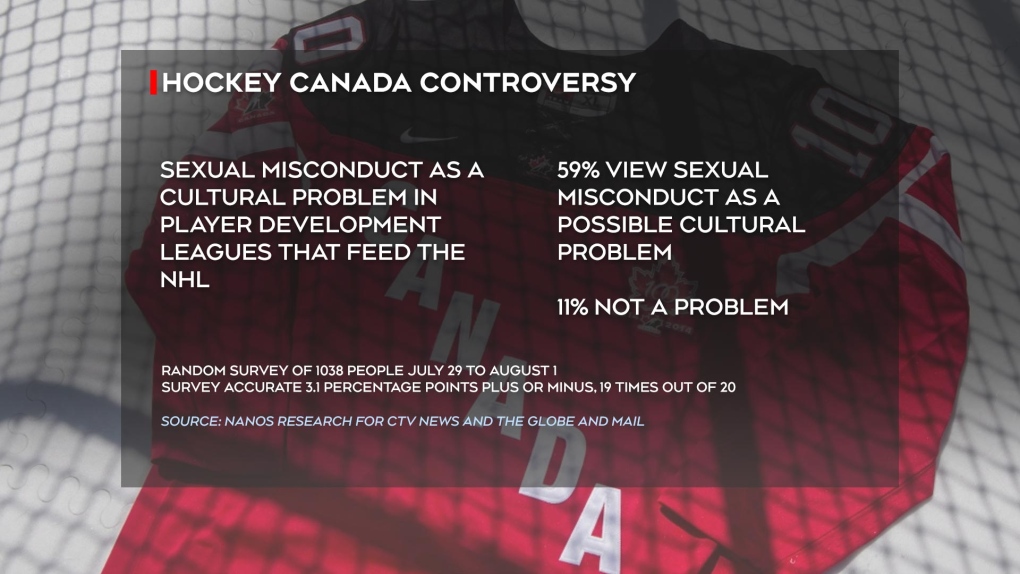 Data from a Nanos Research poll asking if sexual misconduct is a cultural problem in hockey.

Women, meantime, were more likely than men to view sexual misconduct as a problem in hockey.

“It just feels like it is very ingrained in the culture of hockey,” Novo said.

Other hockey parents CTV News spoke to in Winnipeg Friday said while they’re not happy the way their fees were used and want more transparency from Hockey Canada, they have no plans to take their kids out of the game because it’s a sport they love and enjoy.

Fifty-five per cent of survey respondents said it will have no impact on the likelihood of having their children play hockey while 39 per cent said they’re less likely to sign up their kids. 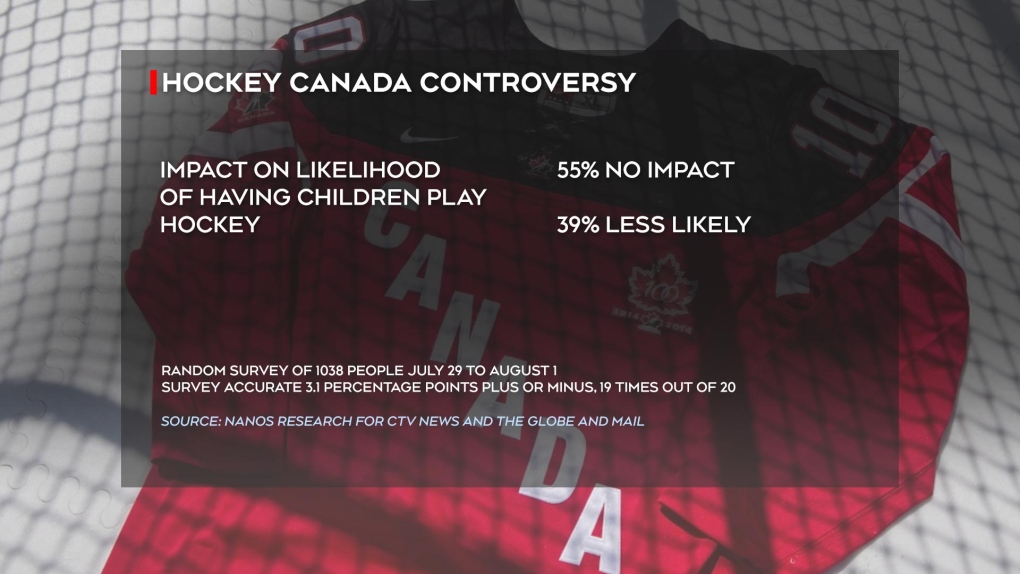 Daryl Fowler, president of Hockey Winnipeg, said there needs to be more transparency about where the money Hockey Canada collects is going and if there’s not, Hockey Winnipeg may look at options for holding back the fees sent to the organization.

“We know that everybody’s discussing it when everybody gets together and it’s an issue that’s gotta get resolved,” Fowler said. “Hockey’s a great game and it’s kind of giving it a black eye right now.”

Novo said she won’t pull her sons from playing hockey but wants to see the culture of the game changed.

Something she thinks needs to happen at a local level, to root out any problems when players are just getting started in the game.

Hockey Manitoba said Friday it’s holding an annual meeting of its board of directors this weekend and may have more to say on the issue Monday.

Survey accurate 3.1 percentage points plus or minus, 19 times out of 20

Source: Nanos Research for CTV News and The Globe and Mail