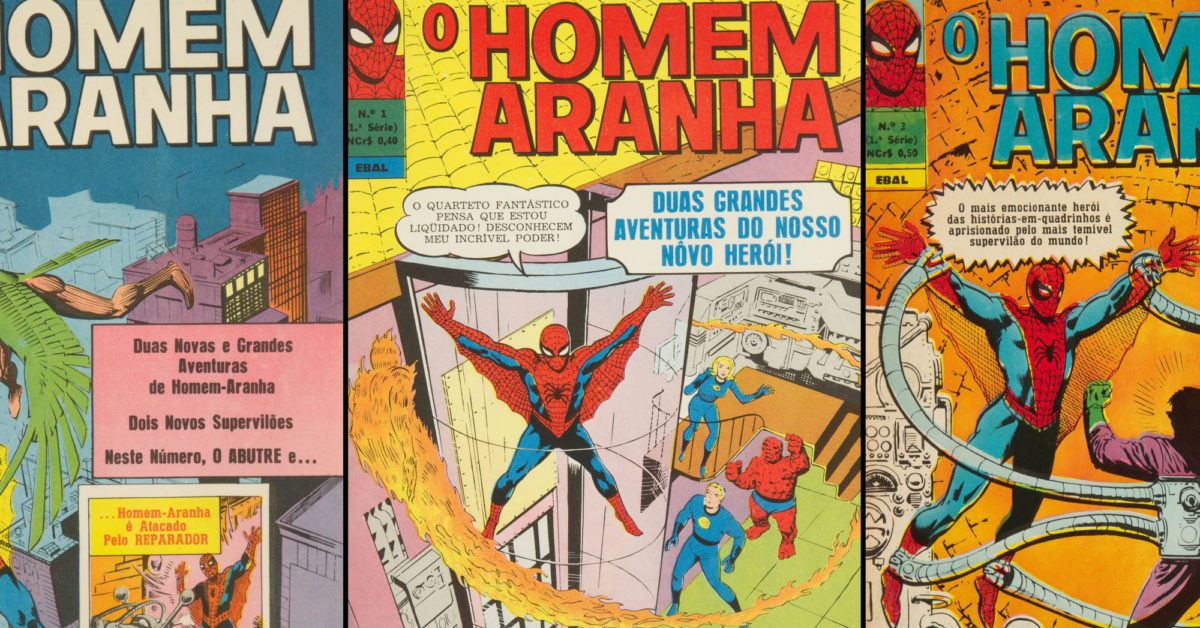 Global licensing of literary and artistic works has been a key component of publishing mass market pop culture since international agreements governing copyright such as the Berne Convention began to gain acceptance and adaption in the 1880s.   Comic book material has long enjoyed worldwide popularity, and the Golden and Silver Ages of comics saw many popular North American comic book stories published in numerous international markets.  Brazil has long been an important market for such material, and the publisher Editora Brasil – América Limitada (founded in 1945 and typically known as EBAL) was at the forefront of publishing comics from the likes of Marvel, DC Comics, and Disney among others for decades.  In 1969, EBAL launched the Brazilian edition of the Amazing Spider-Man series, called O Homem-Aranha.  International editions of key comic books have been gaining popularity among collectors in recent times, both for their rarity as compared to their North American counterparts, and due to the rising global popularity of many comic book characters.  Spider-Man has long enjoyed such global popularity, and the highest CGC graded copies of The Amazing Spider-Man (O Homem-Aranha) #1-3 Brazilian Editions (Editora Brasil-America, 1969) are up for auction in the 2022 September 8 – 11 Comics & Comic Art Signature® Auction #7279 at Heritage Auctions.

EBAL founder Adolfo Aizen is considered the father of comic books in Brazil for his role in introducing the country to North American comics properties.  In 1934, working with the newspaper A Nação, Aizen launched the tabloid format comic weekly O Suplemento Infantil.  Aizen quickly took over the series using the publishing company Grande Consórcio Suplementos Nacionais and renamed it O Suplemento Juvenil.  The title soon featured a wide range of popular North American comic strips such as Flash Gordon, Donald Duck, Tarzan, and numerous others.  From 1939 through the early 1940s, Grande Consórcio Suplementos Nacionais titles such as Mirim and O Lobinho published material from the likes of Fox Feature Syndicate and DC Comics.  Aizen’s next company EBAL published an incredible range of comic book material starting in 1945 and well beyond.  Beginning in 1969 and later, EBAL began to publish Silver Age Marvel material in titles like O Homem-Aranha, Capitão América (Captain America), Quarteto Fantástico (Fantastic Four), and many others, and continued publishing material from numerous North American and British publishers through the 1970s.  The publisher reportedly began to wind down in the 1980s and ceased operations not long after Aizen’s death in 1991.

Notably, while the contents of O Homem-Aranha #1-3 correspond to the cover stories of Amazing Spider-Man #1-3, these three EBAL issues also serialize the Spider-Man vs Sandman story from Amazing Spider-Man #4 across those first three issues of the EBAL editions as backup stories.  In recent times, there has been an increasing awareness of international edition comic books as communities and experts have begun to share and assemble information about publishers and titles.  There are only a handful of copies of each of these issues on the CGC Census, but the highest CGC graded copies of The Amazing Spider-Man (O Homem-Aranha) #1-3 Brazilian Editions (Editora Brasil-America, 1969) are up for auction in the 2022 September 8 – 11 Comics & Comic Art Signature® Auction #7279 at Heritage Auctions.