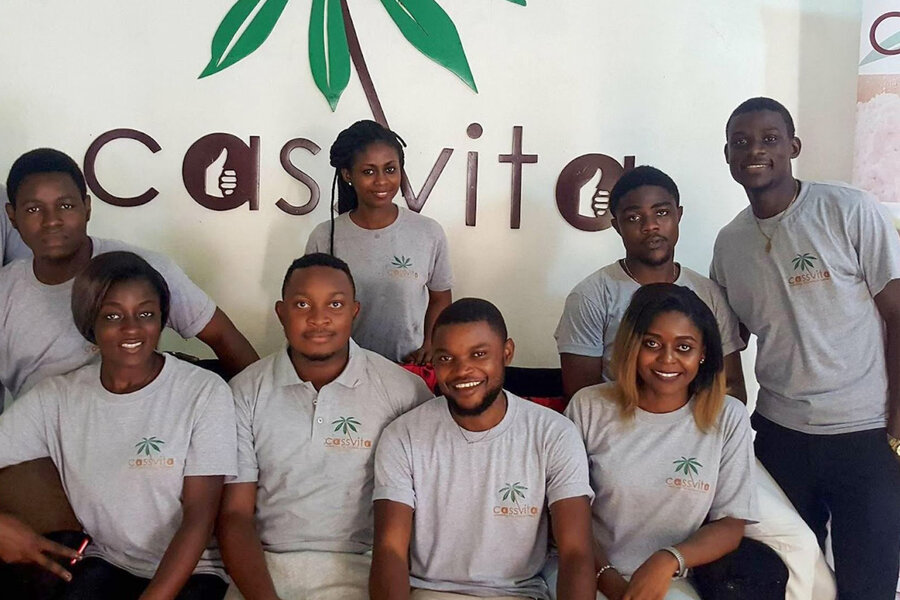 The root vegetable cassava is a major food staple in dozens of countries across the world. Drought-resistant, nutritious, and tasty, it has also become a major source of income for small-scale, rural farmers in places like West Africa and Southeast Asia.

But the utility of cassava has always been limited by its short postharvest shelf life of two to three days. That puts millions of farmers who rely on the crop in a difficult position. The farmers can’t plant more than they can sell quickly in local markets, and they’re often forced to sell below market prices because buyers know the harvest will spoil rapidly. As a result, cassava farmers are among the world’s poorest people.

Now, the startup CassVita is buying cassava directly from farmers and applying a patent-pending biotechnology to extend its shelf life to 18 months. The approach has the potential to transform economies in rural, impoverished regions where millions of families rely on the crop for income.

CassVita tells farmers how much cassava the company will buy each month, and processes the cassava at a manufacturing facility in Cameroon. It currently sells the first version of its product as a powdered food to people in Cameroon and to West African immigrants in the U.S.

But CassVita founder and CEO Pelkins Ajanoh ’18 says the future of the company will revolve around its next product: a cassava-based flour that can act as a direct substitute for wheat. The wheat substitute would dramatically broaden CassVita’s target market to include the fast-growing, trillion-dollar healthy food market.

Ajanoh says CassVita is currently able to increase farmers’ incomes by about 400 percent through its purchases.

“Our objective is to leverage proprietary technology to offer a healthier and better-tasting alternative to wheat while creating prosperity for local farmers,” Ajanoh says. “We’re hoping to tap into this huge market while empowering farmers, all by minimizing spoilage and incentivizing farmers to plant more.”

Gaining confidence to help a community

While growing up in Cameroon, Ajanoh’s parents always emphasized the importance of education for him and his three siblings. But Ajanoh lost his father when he was 13, and his mother moved to the U.S. a year later to help provide for the family. During that time, Ajanoh lived with his grandmother, a cassava farmer. For many years, Ajanoh watched his grandmother harvest cassava without making any lasting financial gains. He remembers feeling powerless as his grandmother struggled to pay for things like diabetes medication.

Then Ajanoh earned the top marks on the national exams that Cameroonian students take before college. After high school, he joined his mother in the U.S. and came to MIT to study mechanical engineering. Once on campus, Ajanoh says he had lunch with new people all the time to learn from them.

“I’d never had this community of intellectuals—and they were from all over the world—so I soaked up as much as I could,” Ajanoh says. “That sparked an interest in entrepreneurship, because MIT is super entrepreneurial. Everyone’s thinking of starting something cool.”

Ajanoh also got a confidence boost during an internship in the summer after his junior year, when he created self-driving technology for General Motors that was eventually patented.

“It made me realize I could do something really valuable for the world, and by the end of that internship I was thinking, “Now I want to solve a problem in my community,'” he says.

Returning to the crop he knew well, Ajanoh received a series of grants from the MIT Sandbox Innovation Fund to experiment with ways to extend the shelf life of cassava. In the summer of 2018, the MIT-Africa program sponsored three MIT students to fly to Cameroon with him to participate in internships with the company.

Today CassVita partners with development banks to help farmers get loans to buy the cassava sticks used for planting. Ajanoh says CassVita decided on a powdered food for its first product because it requires less marketing to sell to West Africans, who are familiar with the dish. Now the company is working on a cassava flour that it will market to all consumers looking for healthy alternatives to wheat that can be used in pastries and other baked goods.

“Cassava makes sense as a global substitute to wheat because it’s gluten free, grain free, nut free, and it also helps with glucose regulation, to normalize blood sugar levels, to lower triglycerides, so the health benefits are exciting,” Ajanoh says. “But the farmers were still living in poverty, so if we could solve the shelf-life problem then we could empower these farmers to offer healthier wheat alternatives to the global market.”

The project has taken on additional urgency now that the war in Ukraine is limiting that country’s wheat and grain exports, raising prices, and heightening food insecurity in regions around the globe.

Showing the value of helping farmers

Ajanoh says the majority of people farming cassava are women, and he says the challenges related to cassava’s shelf life have contributed to gender inequities in many communities. In fact, of the roughly 500 farmers CassVita works with in Cameroon, 95% are women.

“That has always excited me because I was raised by women, so working on something that could empower women in their communities and give them authority is fulfilling,” Ajanoh says.

Ajanoh has already heard from farmers who have been able to send their children to school for the first time because of improved financial situations. Now, as CassVita continues to scale, Ajanoh wants to stay focused on the technology that enables these new business models.

“We’re evolving into a food technology company,” Ajanoh says. “We prefer to focus on leveraging technology to impact lives and improve outcomes in these communities. Right now, we’re going all the way to consumers because this is an opportunity the Nestles and the Unilevers of the world won’t pick up because the market doesn’t make sense to them yet. So, we have to build this company and show them the value.”

Provided by
Massachusetts Institute of Technology


This story is republished courtesy of MIT News (web.mit.edu/newsoffice/), a popular site that covers news about MIT research, innovation and teaching.