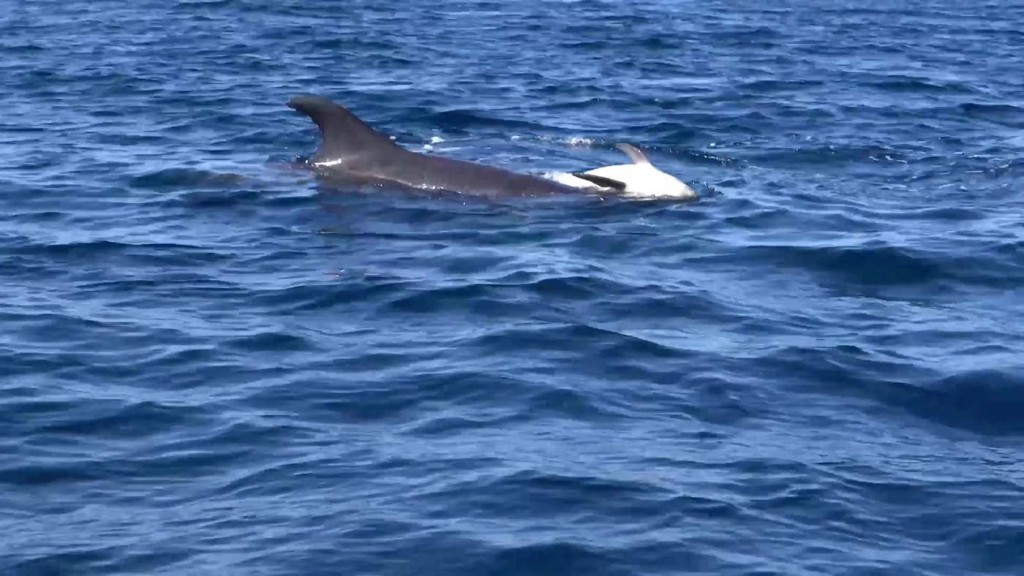 A mother dolphin was seen carrying her deceased calf on her back in the middle of the Mediterranean sea.

The tragic and rare moment was captured by 29-year-old Margarita Samsonova, an environmental content creator.

Margarita, who lives in Lisbon, believes this is the only time this behavior has been witnessed in Europe, and represented an incredible insight into animals experiencing grief.

She had been out on the water for approximately five hours and was on her way back with her team to port when they saw the dolphin pod.

“It was very mixed emotions,” Margarita said. “Instantly, I cried, it was really heartbreaking and really painful to watch this.”

Margarita studied Zoology at Oxford Brookes University and captured the moment while accompanying a research team.

The group, lead by the researchers from AIMM, a marine research association from Portugal, was on an expedition off the coast of Albufeira.

“The dolphins were behaving very unusually, they were jumping higher than normal and making very strange vocalizations,” she remembered. “Then we noticed a mother with a calf, and the calf was dead, and it was clear that she was trying to bring the baby to the surface.”

“It really seemed like a moment of grief that was expressed both by the mother and other dolphins.”

Margarita explained that it is uncertain what exactly this behavior might mean.

However, she said that the head of the research team speculated that it shows a true expression of grief from the part of the mother. That might be knee-jerk reaction, and humanization of the animal on the part of the scientist. Occam’s Razor would suggest the mom simply didn’t realize the calf was dead, but that the pod was on the move and so she had to move the calf.

This behavior has been documented before in dolphins in the Atlantic Ocean. Dr. Joan Gonzalvo of the Ionian Project, funded by the Tethys Research Institute, has seen bottlenose dolphins attending to a dead calf on three occasions.

“So my hypothesis is that when the mothers carried their calves for several days, it was because the calves were newborn, so the death was unexpected and sudden,” Dr. Gonzalvo told the BBC. “The mothers needed more time to grieve.”

“But when the pod had to care for an animal that had been struggling for some time already, in some ways it was a relief when it died, so they could move away that day rather than carrying the body for a week.”

WATCH the behavior and decide for yourself…