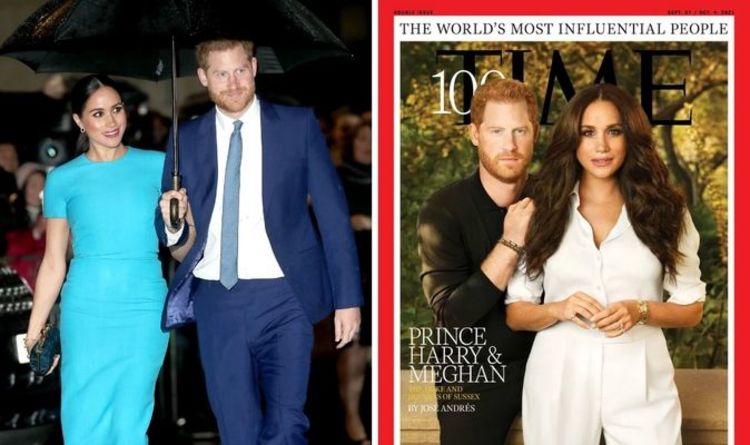 Prince Harry and Meghan Markle were praised by the magazine for having “compassion for the people they don’t know”. The couple can be seen on one of the magazine front covers, wearing contrasting outfits from one another. Despite the powerful photo, it has been criticised heavily for “extreme airbrushing”.

One Twitter user, Daniella May, said: “Not only does it look like Harry was photoshopped in, this is the most airbrushed photo I have ever seen.”

Another person, Jessica Parry, wrote: “They look different from usual, heavily airbrushed picture there. This is sending out the wrong message.”

One user, Geoff Sharp, explained: “This is the weirdest photo. They look powerful but I thought it was fake, the editing is really bad.”

Another snap of the happy couple pictured them walking through their Californian estate wearing matching green clothing as they glanced into one another’s eyes.

The photo was branded “awkward” and “extremely photoshopped” as they walked under a huge tree with surrounding greenery.

Twitter user, Krys Pagan, wrote: “Love the poses in these photos but the photoshoot couldn’t get anymore cringe if it tried. Not to mention how bad the editing is, extremely photoshopped.”

Another user, who went by the name Selwa, said: “Their skin looks too good to be true, it’s so smooth. Also Harry’s eyes are not that bright, definitely some retouching gone on there.”

Others were proud of the couple and thrilled for them to be appearing on the magazine cover.

Nathan Samuels said: “So beautiful, it sums up who Harry and Meghan are.”

Martha Jones wrote: “Meghan is such a beautiful woman! Harry looks good too with his blue eyes.”

The announcement came as Harry celebrates his 37th birthday in America.

Other family members including Kate and William also sent their wishes to the Prince.

Kate and Meghan: How the Duchesses’ wear birthstone jewellery with ‘helpful…

On MF Husain’s Birth Anniversary, Here are Some Famous Quotes by the Maverick…

Lesser-known Facts About the ‘Picasso of India’