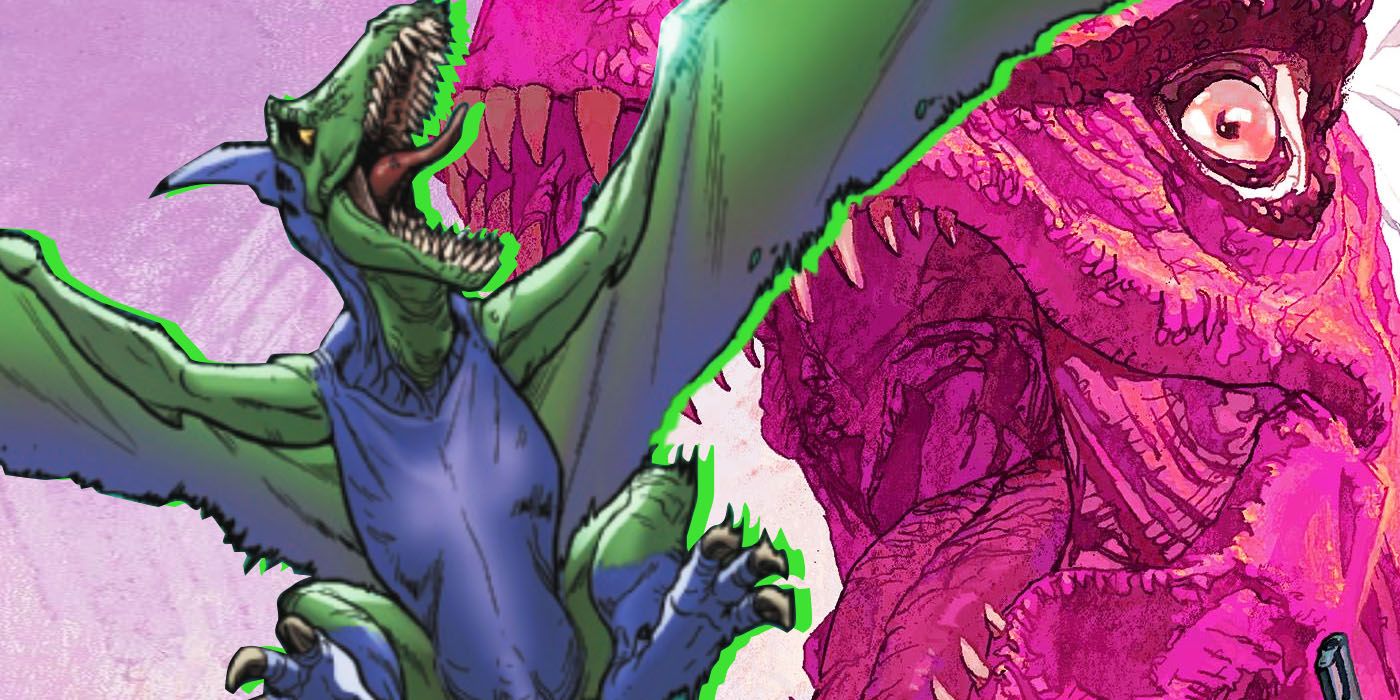 Marvel’s Edge of Spider-Verse #1 introduces readers to a new Green Goblin variant who is completely Jurassic.

Millions of years ago, Norrannosaurman was a vicious Tyrannosaurus rex while Pter Ptarker was a gentle Pterodactyl being raised by his Uncle Bten and Aunpt May. Norrannosaurman was chasing Pter one day and had him in his jaws when a comet with a bunch of spiders falling out of it collided with the two of them. The comet caused Pter​​​​​​​ to become the superpowered Spider-Rex, while Norrannosaurman was turned into a monstrous, green and purple Pterodactyl who harbors a serious hatred for the web-slinging dino.

Joined by a small team of Velociraptors, Norrannosaurman attacks Pter and his family. The conflict leads to a chase through the jungle that ultimately ends in Norrannosaurman’s defeat; although, Norrannosaurman falls through several trees before he collides with the ground, which results in the death of a few innocent “dinostanders” who happen to be in the wrong place at the wrong time. “This is all my fault!” Spider-Rex screams in disbelief. “I’ll never be so reckless again!” Narration text further reads, “And that was the day the Amazing Spider-Rex learned with grraaah power there must also come grrresponsibility.”

Watching the conflict play out from above is Anya Corazon/Araña, a former Spider-Girl who also is featured in the anthology issue. In “The Hero Within” by writer Alex Segura, artist Caio Majado, colorist Brian Reber and letterer VC’s Joe Caramagna, Araña is enlisted by Madame Web to unite the Spider-Verse for an upcoming war. Edge of Spider-Verse will continue to bring in both new and familiar Spider-Man variants in the following four issues before things come to a head with the “End of the Spider-Verse” storyline in Dan Slott and Mark Bagley’s upcoming Spider-Man run.

7 Tasks Every Leader Must Master

‘Splatoon 3’ Direct announced by Nintendo for this week