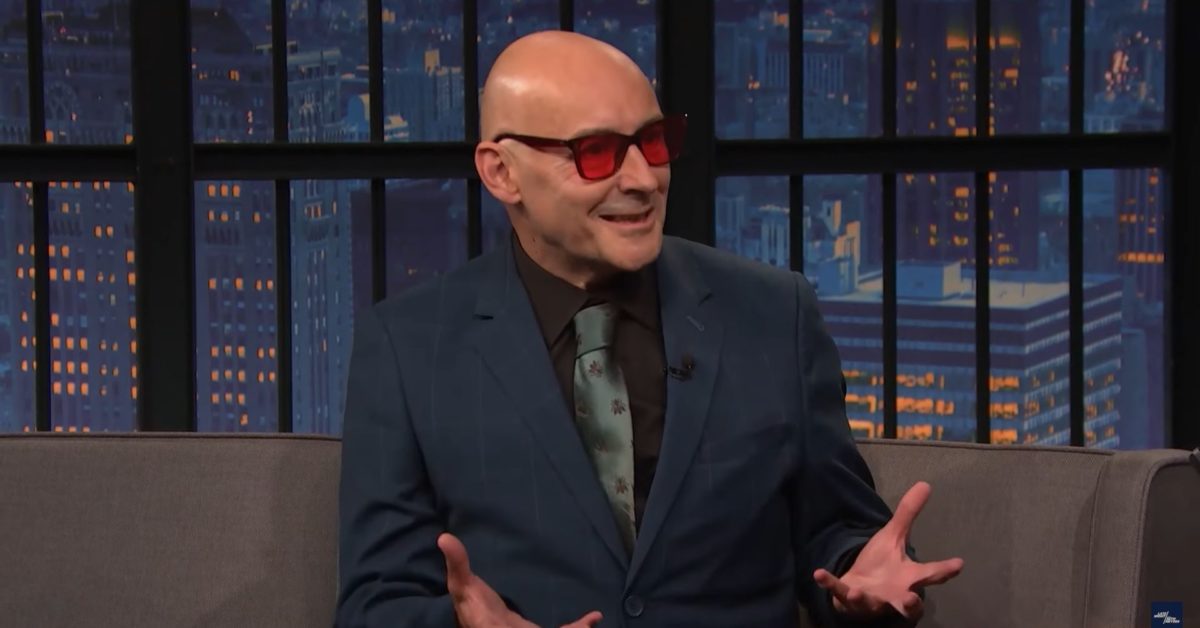 Grant Morrison went on Late Night With Seth Meyers last night to talk about their first novel, published this week, Luda. Described as a “story about an aging drag queen and a younger prodigy who comes into their life and how it affects it” all set in a Scottish/American melded city of Gasglow, a combination of Glasgow and Brooklyn, and a place in which Grant visited in their dreams. They told Seth;

“I wanted to do a retelling of the old story of Merlin the magician, the Arthurian legend. And he had this story where Merlin at the end of his life, he meets this young witch called Vivian. And she flatters him and she kind of wants to learn magic. And, of course, it all goes badly. You know, he’s just the old goat who thinks this beautiful young woman is interested in him. And he teaches her all the secrets, and then she locks him in an oak tree for all eternity. So a lesson for us all, I think… do not trust the young, especially the young who want to learn your secrets. So it started from that. And I thought that’s a story that really needs a drag makeover. I want to see Merlin in a dress. So the idea of doing a contemporary version of that and set in this theater world that was super-contained with these characters who were basically living in a world, which is our world, where we can’t tell the difference between reality and illusion anymore. We’re in the world of fake news and VR and AR, all that stuff. So this book is kind of, how do you negotiate a world in which we don’t know what’s real and what’s true and what’s fake?”

Seth commented “to some degree, it seems like drag is a huge departure from, say, superheroes. But in another way, it’s not at all.” Something Grant Morrison seized upon.

“Well, absolutely not. You think of Superman, Peter Parker, those are just nerdy guys, but then they dress up in these super flamboyant costumes and go out at night Batman’s the worst. Batman’s dressed for the fetish club. He gets in his big car, and he cruises the streets of Gotham. He’s obviously — He’s hoping the Joker notices. You know, he wants that. He wants to be seen. And that’s why.”

“There’s no way he’s going out as Bruce Wayne. That guy’s putting on the ears and the elathers and the cape and is like, “Notice me!” So I think it’s just a hop, skip, and a jump from RuPaul to Bruce Wayne, you know?”

Seth parried “And with each passing day, RuPaul almost has as much money as Bruce Wayne, so that it’s getting closer” to a final flourish from Grant “Yeah, and I know she fights crime on the side.”

Grant Morrison also talked about their experiences in drag inspired by British comic books, as well as being in punk rock bands back in the day, the kind of comic book questions they have to deal with on a day to basis, and the time their mother would print of three hundred copies of their schoolchild comic to give out to people… say, anyone still got a copy? Luda is available right here.

Rivian announce partnership to build in Europe with Mercedes