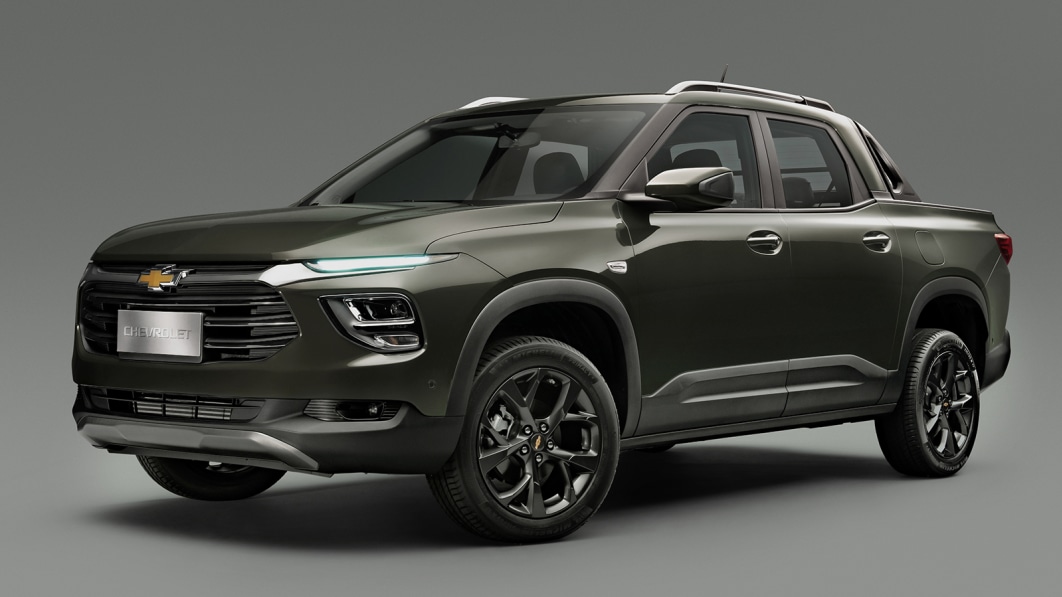 General Motors is considering adding a small entry-level model to its range of electric pickups, according to a recent report. The carmaker is currently showing a prototype to a select group of customers to gather feedback about the model before executives decide its fate.

Industry trade journal Automotive News claims that it saw the pickup during a workshop organized by General Motors and describes it as being “smaller than the Ford Maverick and the Hyundai Santa Cruz.” For context, the Maverick stretches about 200 inches long, 73 inches wide, and 69 inches tall, so it’s around 12 inches shorter, 11 inches narrower, and 10 inches lower than the recently-unveiled Chevrolet Colorado. It sounds like this little GM truck would be closer in size to the Brazilian-market Chevy Montana, pictured at top.

But unlike the Montana, the model that Automotive News got a look at had two doors, a “low roofline,” a four- to four-and-a-half-foot cargo box, and a design described as futuristic and sporty. If launched, the yet-unnamed pickup would be marketed as an “affordable” EV with a base price pegged under $30,000. However, that’s a big if: the pickup — whose name hasn’t been announced — hasn’t been approved for production.

“We’re creating these to get a reaction and then to try to modify it or move on,” Michael Pevovar, the director affordable EV and crossover design for Chevrolet, told the publication. “The input may come back that it’s just too small, and that’s okay,” he added. If it turns out to be too small for buyers, General Motors hasn’t ruled out building its entry-level electric pickup on a different architecture to make it a little bigger.

It’s too early to tell where the electric pickup would slot in the General Motors portfolio if executives approve it. Chevrolet immediately comes to mind, especially considering the sub-$30,000 price point. The model would make more sense with a bowtie on its front end than with a Cadillac emblem, GMC’s trucks are normally positioned higher than Chevrolet’s, and Buick hasn’t built a pickup in many decades.

Similarly, there’s no word on when it would enter production or where it would be built. With that being said, there’s very clearly a market for affordable, small pickup trucks. As of the third quarter of last year, Ford had sold more Mavericks than it had the Expedition or the Ranger. Hyundai hasn’t sold as many Santa Cruz trucks, but it’s still not too shabby, having beaten out the Venue and Accent last year. The fact that Ram is also on record as looking into small trucks is another sign that the segment has real potential.

GM looking at an electric variant would also give it a unique edge in this new segment. Ford does offer a hybrid version of the Maverick, but otherwise it and the Santa Cruz are internal combustion-only. It would also seem unlikely that any models Ram is considering would be fully electric.

“She Is Trying Hard To Forget, But…”

3 Ways to Meet the Needs of a Divergent Workforce