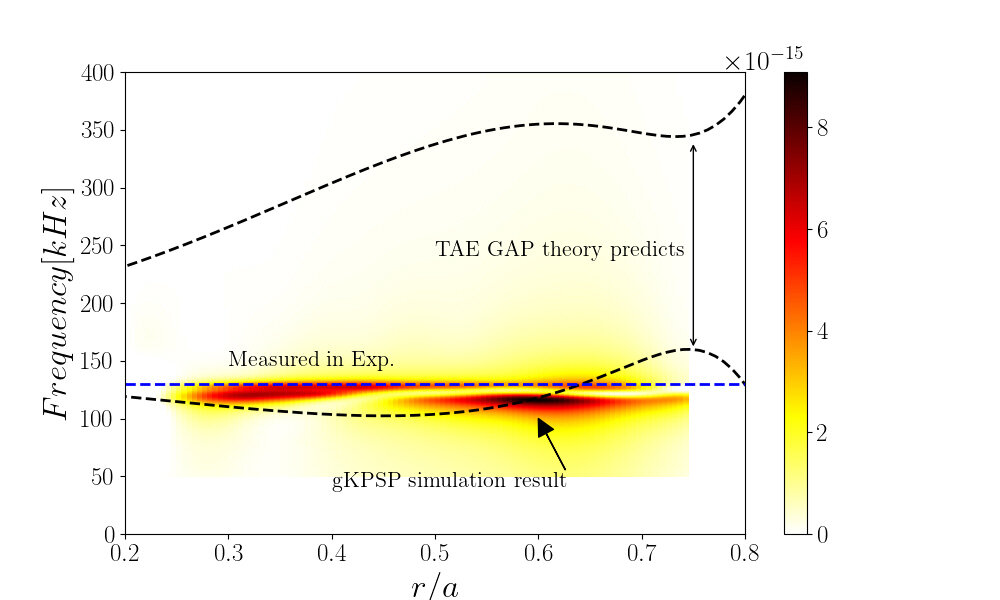 On 1 August, the Korea Institute of Fusion Energy (KFE) announced that a new fusion simulation code was developed to project and analyze the Toroidal-Alfvén-Eigenmode (TAE). In TAE, instabilities occur in the course of interactions between fast ions and the perturbed magnetic fields surrounding them. It disturbs a tokamak’s plasma confinement by disengaging fast ions from the plasma core.

Because fast ions have much more kinetic energy than normal ones, they play a significant role in facilitating fusion reactions by increasing the plasma temperatures and performance. Stably confining them in the plasma core is therefore considered one of the most important tasks for sustaining fusion reactions.

Several studies were conducted to understand the relationship between fast ions and the TAE in order to prevent TAE instabilities and increase fast ion confinement. At KFE, Dr. Youngwoo Cho has improved the Gyro Kinetic Plasma Simulation Program (gKPSP) to calculate and project the changes in TAE following fast ion movements.

The gKPSP, a domestically developed fusion simulation code, was mainly used for analyzing plasma transport phenomena until Dr. Cho added a feature to enable electromagnetic analysis. With the amendment, it is now capable of analyzing the TAE instabilities, and has passed cross-validation with other existing codes.

The new code will be utilized for analyzing the confinement performance of fast ions generated by different methods, including various heating devices and fusion reactions. It is expected to contribute to developing plasma performance enhancement technologies by optimizing fast ions’ confinement performance. The result of this research was published in the Physics of Plasmas on 7 June.

KFE is operating the Korean artificial sun, KSTAR (Korea Superconducting Tokamak Advanced Research) which set the record in 2021 for the world’s longest plasma operation at ion temperatures of over one hundred million degrees for thirty seconds. It will keep challenging fusion simulation research to resolve puzzles regarding plasmas’ instabilities and turbulences.

How Virus Hunters Are Preparing for the Next Pandemic