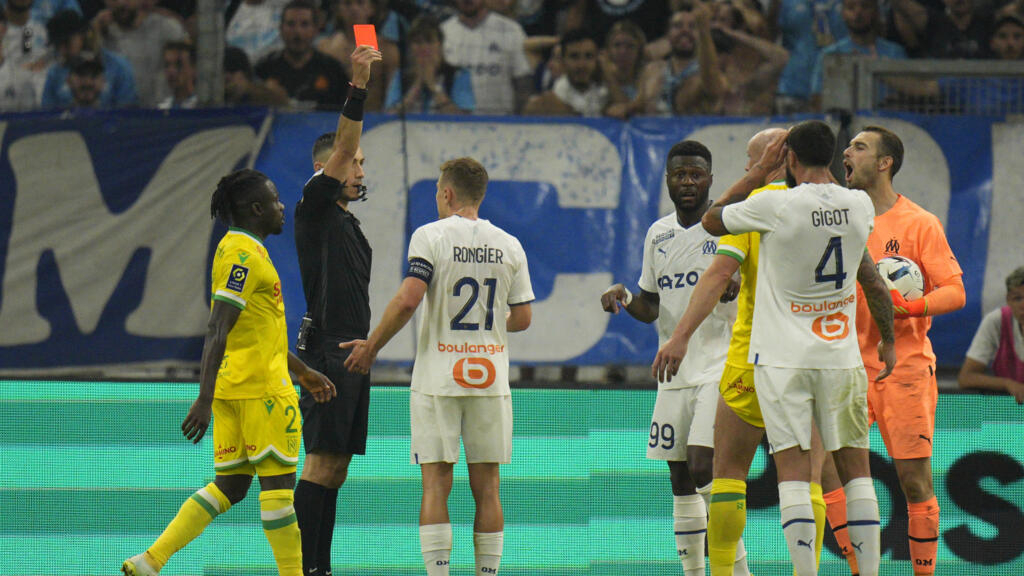 French football was hit by a red wave as referees applied a new “firmness order” with nine red cards in Ligue 1 on Sunday.

With the weekend’s last match, between Lille and leaders Paris Saint-Germain still to play, that took the weekend total in the French top flight to 11.

Angers ended with 10 as they lost 3-1 at home to Brest and both teams had two men sent off as Auxerre won 2-1 at Montpellier.

In the late afternoon game, despite a warning from their coach, Ajaccio finished with 10 men. Hosts Rennes, who won 2-1, even had a player on the bench sent off.

“Seeing the matches earlier in the day, I had the feeling that the referees had received firm instructions. I warned my players,” said Ajaccio coach Olivier Pantaloni.

On Saturday, Vanderson was sent off as Monaco lost at home to Lens while Marseille beat Nantes despite losing Samuel Gigot.

The 11 reds were a single-round high in Ligue 1 for the last 30 years, according to statistics company Opta.

There were also seven reds in Ligue 2, three of them for Saint-Etienne as they lost 6-0 at home to Le Havre and two for Metz who still drew at Laval.

In Clermont, Saif-Eddine Khaoui scored the only goal against Nice in the fifth minute.

The visitor, who have not won this season, lost Mario Lemina in the 80th minute, shown a red card for a tackle from behind.

Two minutes later, Jean-Clair Todibo collected his second yellow for dissent after a foul was awarded against Aaron Ramsey.

Lesley Ugochukwu, who had only come on for Ajaccio five minutes earlier was shown red for a foul in added time.

“The spectacle was perhaps more the red cards than the play this afternoon,” complained Rennes coach Bruno Genesio.

“It’s a bit weird. It is regrettable. Because it distorts the matches,” said Genesio. “I saw a bit of the matches before ours. Some are justified, others a little less.”

Genesio said some coaches had wanted a meeting with referees, but others were not interested, which, he said, was “a pity”.

There were four red cards in Montpellier as Auxerre gained a first victory in Ligue 1 since May 2012.

Montpellier midfielder Khalil Fayad was sent off in the 46th minute and Auxerre striker M’Baye Niang in the 51st.

After Mathias Autret scored a penalty winner, Nuno Da Costa and then Montpellier midfielder Teji Savanier were sent off.

“In our time, when we played, we killed each other. There was never a yellow or a red. UEFA changed all that because there were serious injuries like (Diego) Maradona or (Marco) Van Basten,” said the former defender, who played for a series of French clubs from the mid-1970s to the early 1990s.

“There are red cards being shown very quickly, there are penalties being whistled very quickly,” said Dall’Oglio.

“There are always new instructions. There is always a new strictness, but it will fade as the days go by.”

Angers lost 3-1 at home to Brest after losing Halid Sabanovic to a straight red in the 35th minute.