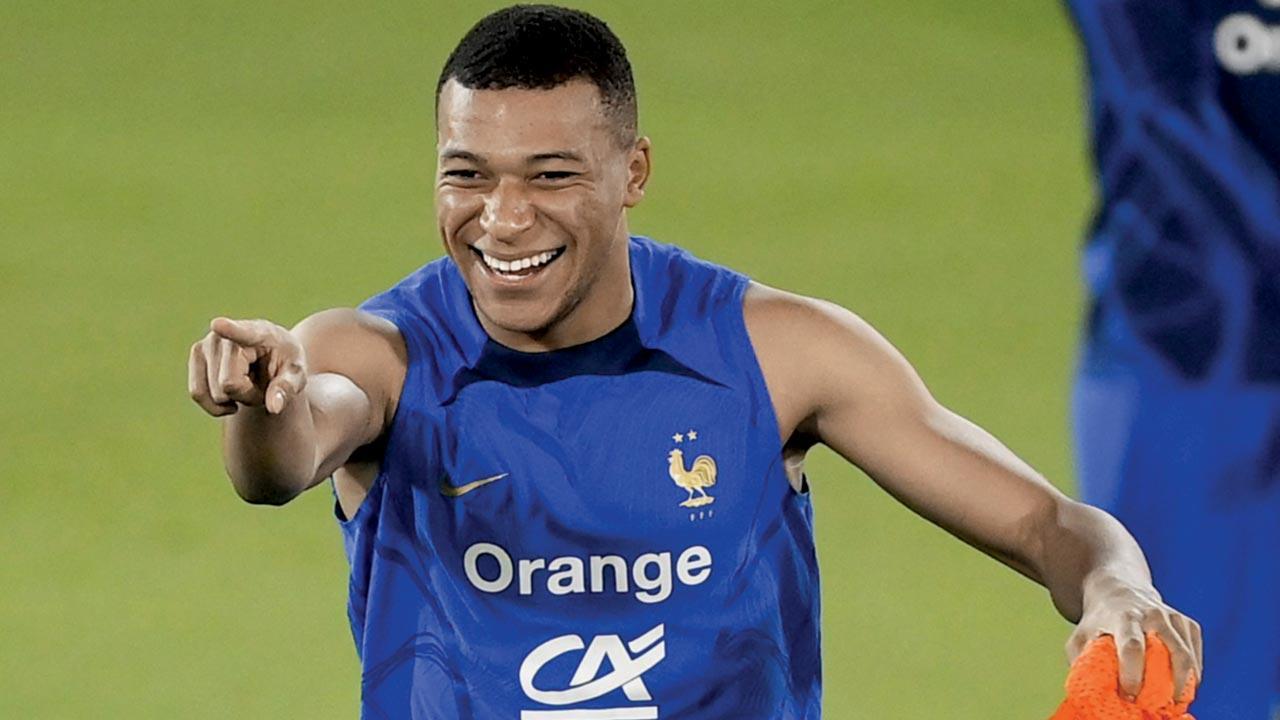 In the other encounter, defending champions France are confident that Kylian Mbappe will more than make up for the absence of the injured in-form Karim Benzema.

While many believe that France’s hopes of successfully defending their World Cup were dealt a huge blow with Ballon d’Or winner Karim Benzema being ruled out of the tournament with a left thigh injury, their captain and coach think otherwise.

France’s Kylian Mbappe (left) and Hugo Lloris during a training session in Doha  on Sunday. Pic/AFP

And both had a common reason—Kylian Mbappe, 23, who became only the second teenager after Pele to score in a World Cup final when France beat Croatia 4-2 in the summit clash at Russia in 2018.  With four goals in that tournament, Mbappe was also named FIFA World Cup’s Best Young Player. Mbappe has 28 international goals to his name in 59 games since 2017 (see box).

‘Lived up to hope, hype’

“Kylian has lived up to the hope and hype over the last few years. It’s difficult to find a limit with regards to Kylian’s potential. He is engrossed [in training] and is raring to go on the pitch. We want to get off to a flying start here. We want to have the same experience we had at the 2018 World Cup. We will progress,” Hugo Lloris, 35, said at a press conference on the eve of their World Cup Group D opener against Australia at the Al Jaboub Stadium.

Coach Didier Deschamps couldn’t agree more with his skipper. “Mbappe was much younger in 2018, but he was mature. And now he has become even more mature. He has a lot more global recognition and responsibility now. He has what it takes to stand out from the crowd. His aura is second to none, but at the same time, he is a team player and needs players around him to excel,” said Deschamps, who led France to the World Cup title in 1998 and the European Championships two years later before winning the World Cup as coach in 2018.

Lloris admitted, however, that Benzema will be sorely missed. “Karim being injured is hard for us. We know how important he is within the team. In fact not only for our team, but also for French football and for younger players in our squad. However, despite the disappointment and sadness, we have to get our heads down and carry on. We have a young squad, but our players are mature,” he said.

Speaking of their opponents, Australia, Lloris said that they can in no way be underestimated. “Australia are a very competitive team. Against Peru, they have won here on penalties [5-4, in the AFC-Conmebol Intercontinental playoff in June this year in Doha]. They have a good mentality and resolve. We need to be careful of their set pieces. We also need to find our own balance and do well on the counters. We want to have a lot of ball possession,” he concluded.