France firm favourites to start off with win against Australia, despite injuries 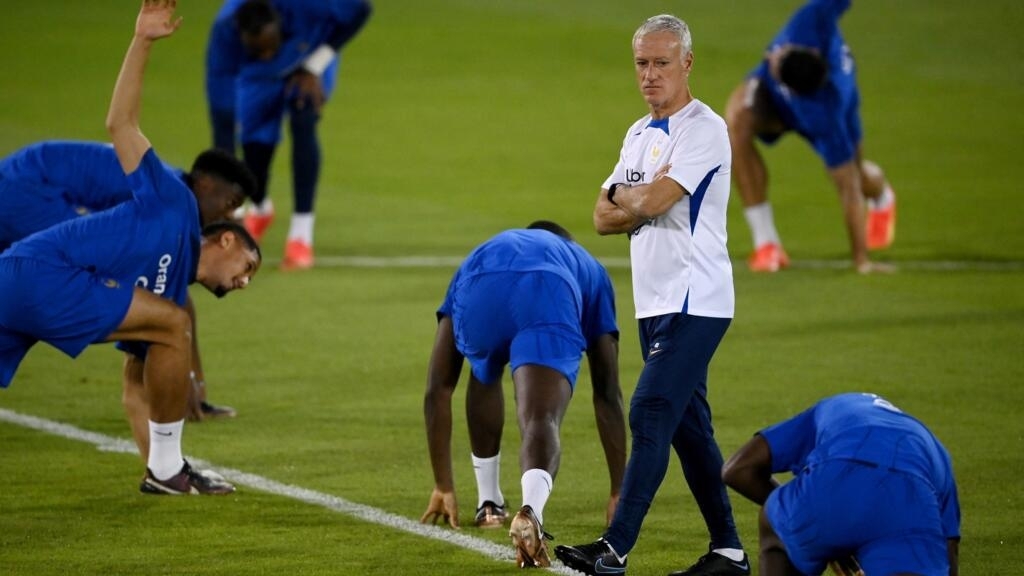 France are overwhelming favourites in their opening clash against relative minnows Australia, especially given the presence of the mighty Kylian Mbappé. But Les Bleus fans can be forgiven a few jitters – as a range of injuries afflicts the squad and the curse of World Cup title-holders looms large.

France go into Qatar 2022 off the back of their barnstorming victory at Russia 2018 – when sluggish group stage performances gave way to a remarkable run of form in the knockouts that carried them all the way to the trophy.

The talismanic wunderkind of 2018, Kylian Mbappé, is now the linchpin of the French squad. Les Bleus will be all the more reliant on Mbappé, as a thigh injury ruled out this year’s Ballon d’Or winner Karim Benzema.

Ever since France manager Didier Deschamps recalled him to the squad for Euro 2021, the Benzema goalscoring machine has been crucial to his plans to overcome the world’s best teams. Atletico Madrid forward Antoine Griezmann and AC Milan striker Olivier Giroud will be expected to fill the gap.

Griezmann’s delicate, deft tactics have transformed many a game during his long career. Giroud has long been one of the most underrated strikers in the world – and is just two goals behind Thierry Henry’s 51-goal record for France; a record he will be motivated to smash in Qatar. But both are past their primes. Giroud is 36. And while Griezmann is five years younger, it says a lot that Atletico mainly bring him on as a sub.

Injuries have marred the French squad elsewhere on the pitch. Chelsea defensive midfielder N’Golo Kanté – arguably Les Bleus’ second-best player at the last World Cup, behind Mbappé – was ruled out with prolonged surgery due to a hamstring injury. A thigh injury put Kanté’s central midfield partner Paul Pogba out of action – another big blow to France, as the Juventus star’s creativity brought several matches alive during that surge to victory in 2018.

Meanwhile the centrepiece of their 2018 defence, Manchester United’s Raphael Varane, has lost some of his trademark speed at the age of 29, despite his indubitable tactical finesse. And Deschamps raised eyebrows by saying Varane is available for the Australia match, seeing as he has not played for a month amid a muscle injury.

But for all the injuries and ageing, France boast some tremendous strengths. They have two of La Liga’s most exciting talents making their World Cup debuts. With tremendous strength and versatility, 23-year-old Barcelona centre half Jules Koundé has the potential to be one of the great French players of the contemporary game – and his youthful dynamism will make a fine complement to Varane’s seasoned tactical nous. Real Madrid’s 20-year-old central midfielder Eduardo Camavinga is another blossoming talent to look out for in Qatar – combining fine positional acumen with a powerful capacity to read the game when on the offensive.

>> Didier Deschamps, the ‘water-carrier’ who reigns over the French national team

If any France manager can make youthful dynamism gel with the wisdom of experience, it is Deschamps. One of just three men to win the World Cup as both a player and manager, the former defensive midfielder was dismissed in the 1990s as a mere “water carrier” by French footballing icon Eric Cantona. But as a manager Deschamps has that all-important quality of deft pragmatism, which moved Les Bleus seamlessly from the defensive tactics of the group stages in 2018 to the attacking daring that saw them lift the trophy.

And most teams would envy France for their reliance on Mbappé – one of the greatest players of the contemporary game, combining lacerating pace with ingenious tactical acumen and clinical finishing skills.

Australia are a much weaker team, having secured their spot in the World Cup after eking out narrow play-off victories against the UAE and Peru, hardly giants of the international game. The Socceroos lack big names like Mark Viduka and Harry Kewell from their golden generation of the early 2000s – never mind players approaching Mbappé’s stature.

The Australians’ goalless defeats to Japan and Saudi Arabia highlight their lack of goalscoring prowess – with none of their eight strikers going to Qatar playing for big name clubs.

However, Graham Arnold’s squad are renowned for the pertinacious “Aussie spirit” that got them through the qualifiers. Arguably their best player is Ajdin Hrustic – an attacking midfielder whose creative spark shows a hint of Paul Scholes, who played a key role in Eintracht Frankfurt’s Europa League victory last season before his move to Serie A side Hellas Verona. Partnering Hrustic in central midfield is Aaron Rooy – something of a Premier League journeyman who found his niche this season as a cool, versatile presence at the heart of the Celtic midfield.

Perhaps the greatest source of hope for Australia – and fear for Les Bleus – is that World Cup holders seldom perform well at the following tournament. Everybody remembers France’s debacle in Japan and South Korea in 2002. On paper, Les Bleus looked even better than the team that won the World Cup on home soil in 1998. In addition to the talismanic presence of Zinédine Zidane, Thierry Henry had become the best striker in the world. But France went home at the group stage, goalless and humiliated. Similarly, Italy couldn’t even beat New Zealand in 2010 after winning their World Cup victory four years earlier.

But while it would be a tremendous achievement for Australia to just hold France to a draw, Les Bleus may feel a certain latitude to under-perform in the group stage. After all, Deschamps’s side only just triumphed over the Socceroos in a lacklustre 2-1 victory in their 2018 opener, before a narrow victory over Peru and a sleepy goalless draw against Denmark. Then they were unstoppable in the knockouts.