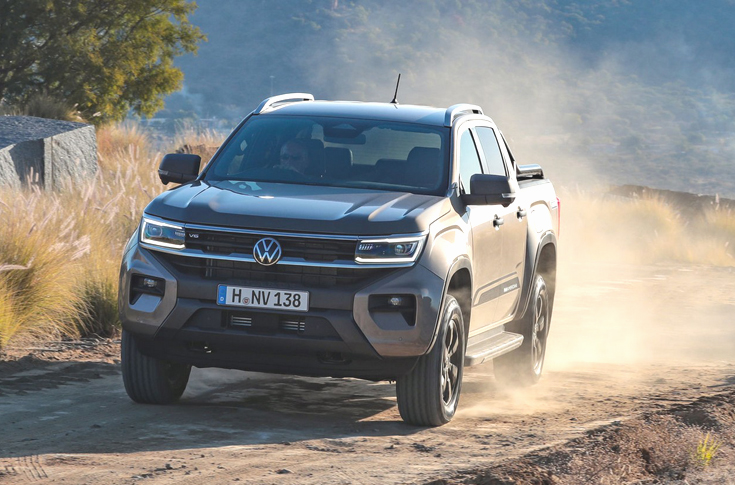 All-new ladder-frame EV SUV will have seating for up to seven; could also spawn a Ford derivative in the future.

Volkswagen is readying an all-new rugged EV SUV, which will be the second jointly developed EV SUV with Ford. This new SUV will not be based on a conventional monocoque platform, but will share the architecture of the Ford Ranger EV’s T6 ladder-frame chassis. The next-gen VW Amarok EV pickup truck will also share the same platform.

This new SUV will be VW’s first EV SUV to feature a ladder-frame set-up. This Ford-developed chassis, which is also used by the fourth-generation Ford Ranger pickup, currently supports petrol, diesel as well as petrol-electric plug-in hybrid powertrains.

In an interview with our sister publication Autocar UK, at the launch of the new Amarok in South Africa in December, Volkswagen Commercial Vehicles CEO Carsten Intra had confirmed that engineering aimed at accommodating a battery and electric motors within the Ford platform is ongoing, despite recent reports suggesting that such plans have been abandoned.

Volkswagen is said to be considering adopting the electrified T6 chassis for a new SUV that is heavily related to the Amarok, but styled in the mould of the ID Ruggdzz – a 4×4 SUV concept that has never been shown in public.

However, plans to progress the ID Ruggdzz concept to production by 2023 were put on hold in late 2020. This was done as Volkswagen moved to consolidate its EV operations following the software glitches that affected the launch phase of its first dedicated electric model, the Volkswagen ID 3.

Details surrounding the resurrection of plans for the ID Ruggdzz remain scarce, but according to Autocar UK, the ongoing engineering of the T6 chassis is headed by Ford Australia in Melbourne, where much of the development of the new Amarok was done. Further engineering is also taking place at Ford’s Dearborn headquarters in the US, according to Intra. As far as styling goes, this new SUV will share its looks with the new Amarok and Ford Ranger, including some interior bits. It will also have seating for up to seven passengers.

Officials have admitted that the electrification of the T6 platform would require a battery with a capacity of at least 110kWh in order to deliver the towing capability and range expected of such an SUV. Expect more details on the upcoming VW ladder-frame EV SUV to trickle in in the coming months.

Teacher shot by 6-year-old texted a dire warning to a loved one before she was wounded, source says