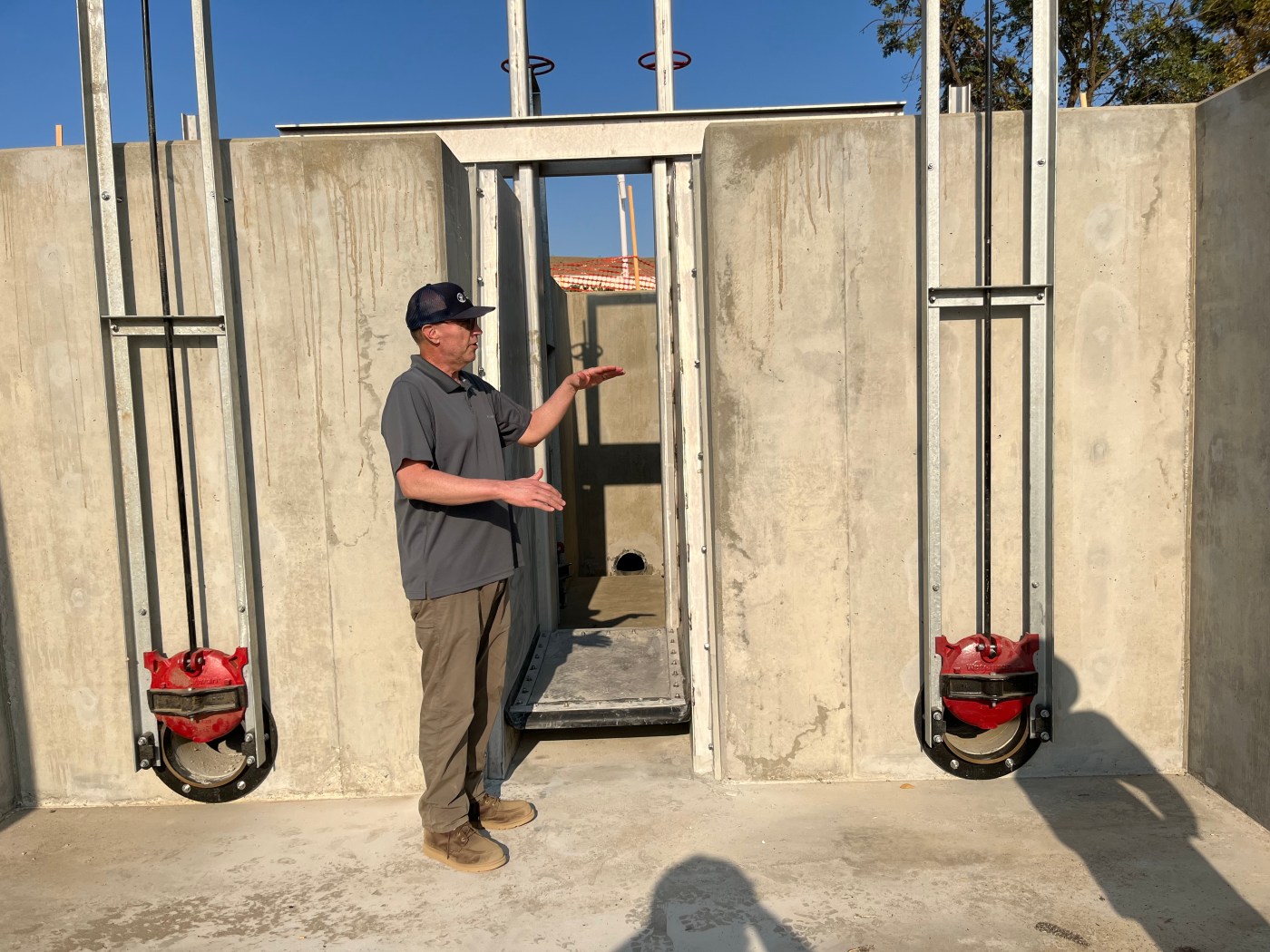 COLUSA — The brainchild for fishgate came to River Partners Senior Restoration Ecologist Michael Rogner,  and Co-Founder of River Partners and Director of Special Projects John Carlon, over a couple of beers at a bar.

Fishgate is an automated/engineered fish door which helps struggling Chinook salmon at River Partners’ Willow Bend Preserve near Colusa return back to their native riverside ranges along the Sacramento River.  The first-of-its-kind fish gate designed by the Cal Poly Irrigation & Training Research Center will prevent juvenile salmon from being trapped on the restored floodplain. The non-electrical gate features concrete buoys that automatically adjust according to water levels, opening and closing a bi-fold gate as floodwaters rise and recede, and allowing fish to swim in and out without getting stranded, according to a press release.

River Partners planted thousands of native trees and plants at the Willow Bend Preserve project in Colusa. The nonprofit restored a former 175-acre walnut orchard that will be reconnected with the Sacramento River to provide a critical rest stop for migrating salmon whose numbers have hit rock bottom. According to the National Oceanic and Atmospheric Administration, the agency that’s funding the project, winter-run Chinook salmon populations on the Sacramento have dropped 90 percent over the last 40 years, according to the release.

“John and I and a few other folks visited a bar/hair salon in 2013 or 2014 and sat around brainstorming ideas on how we could keep water on the floodplain and complete it the way rice farmers do it and allow water to go out.  After we had found out about the high numbers of salmon there are on the floodplain, we started talking engineering,” Rogner said. “We wanted something more sophisticated. We met with Dan Howes at Cal Poly. He makes water control structures for a living. We brought him to the site to see how could he use his expertise to devise a gate.”

The fishgate project took several years to come to fruition.

“Once we put the engineers together we got input from Dan and another engineer from the fishery service, and we started riffing out and came up with fishgate,” Rogner said. “It took several years to come about and three years to get it permitted.”

The actual gate is two and a half feet wide and is wider at the top than on the bottom so fish can go through it.

.River Partners’ Willow Bend Preserve is one of the last rest stops for juvenile salmon swimming down the Sacramento River to get out on the floodplain to feed and put on weight. The single biggest factor predicting a salmon’s survival once it reaches the ocean is how big that salmon is, according to the release.

“I’ve been working with fish and food and floodplains for 20 years. We have been involved in a variety of floodplain projects for salmon benefits. Prior to putting in fishgate, we looked at the last remnants of flood plain within the system such as in 2019 in the flood season and what happens during flooding events, which fish are out there, and how they grow, ” said Carson Jeffres, senior researcher with the University of California, Davis Center for Watershed Sciences. “I am a fish biologist.  I studied juvenile salmon on the flood plain for 20 years, so I have a lot of experience with how the system works. That’s we are doing as this project evolves; to see how fish are using it and the types of resources and how to better manage Willow Bend.”

Willow Bend is allowing scientists and other experts to learn.

“We have to work on better managing and optimizing the system for the fish. At Willow Bend we are learning how to better manage that type of ecosystem and access for fish,” Jeffres said. “The Sacramento river is really a food desert. Fish are making their way and are not able to eat before reaching the ocean. They need to take a break, get big and migrate down the corridor. As soon as the river is levied above these important places, fish are coming back as adults, and we want to make sure they are big before they hit the ocean.”

The goal is to get the salmon to return and breed once they reach full size.

“When they reach their full size in two or three years they come back to breed,” Carlon said.

Jeffres said this project and others like it require a lot of moving parts.

“It takes a lot of folks to make projects like this happen,” said Jeffres. “We have a large group of people who made this happen and it indicates how cooperation and research help these projects and shows positive results going forward.”

The budget for fishgate was $180,000. Total funding from the National Oceanic and Atmospheric Administration was $1.8 million and NOAA’s funding went to restoring the entire site with nearly 13,000 native trees and plants, according to River Partners Communications Director Alex Karolyi.