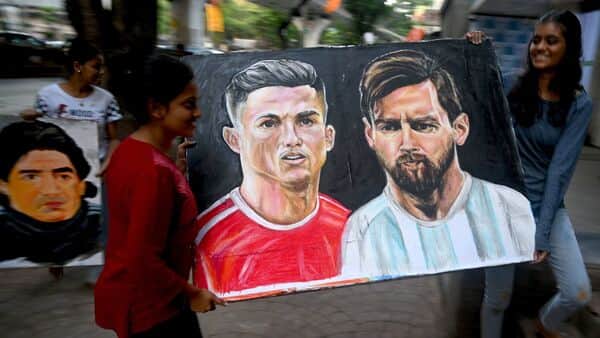 With just a day left for the quadrennial mega event to begin in Qatar, all football fans across the globe are eagerly looking at the their favourite teams and stars how they would perform in the FIFA World Cup 2022.

The FIFA World Cup 2022 in Qatar is slated to take place between 20 November and 18 December, where 32 countries will fight it out to clinch the coveted trophy.

With the opening ceremony of the Qatar FIFA World Cup to kick off 2 hours before the first match between Qatar versus Ecuador at Al Bayt Stadium, all eyes of the football crazy fans would be on the top 10 players to watch out this season.

Here are the top 10 players to watch out for:

1) Lionel Messi (Argentina): Following the win of Copa America in 2021, Argentina has been eyeing on the FIFA World Cup 2022 trophy. With Messi in the team, the chances for Argentina not only doubles, but his feiry nature to play the game worth watchable. Also, the star player had already indicated that this might be his last journey for World Cup and he want to make it more and more memorable.

2) Cristiano Ronaldo (Portugal): Apart from Messi, the most sought out player in the FIFA is Ronaldo. This Portuguese player is the all-time top scorer in the International football circuit. In his presence, Portugal is hoping to win the World Cup this time. His playing style is known to all and fans go crazy to watch him playing.

3) Neymar (Brazil): The marquee player for Brazil, Neymar is a well renowned name in the football circuit. Like Ronaldo and Messi, it may be the last chance to see a natural talent like Neymar at his best.

4. Kylian Mbappe (France): The 2018 World Cup winner, Mbappe is a star footballer from France and French fans are betting on his capabilities to make them keep the title once again.

5. Kevin De Bruyne (Belgium): Considered to be one of the best player in modern football, Bruyne will try to make everything in his foots to transport the FIFA World Cup 2022 back to the country. Like many others, it may be his last world cup.

6) Karim Benzema (France): Football fans across the globe know how Mbappe led France to clinch the 2018 World Cup, however, Benzema’s role would be crucial as he too now is considered as one of the best players in the world. The player has gone through some injury issues lately but did came back and scored five goals in seven La Liga appearances.

7) Vinicius (Brazil): Over the past year, this Brazilian player has became a sensation and what can be a good opportunity other than World Cup to shine. Apart from being one of the most effective player in the squad, he has positioned himself as one of the most entertaining players.

8) Harry Kane (England): In deadly form now, this FIFA World Cup 2018 golden boot winner has now kept his eyes wide open to make England the FIFA World Cup 2022 champions. he has scored 12 goals in 15 games this season with Tottenham Hotspurs and England would be heavily rely on him.

9. Sadio Mane (Senegal): The Senegalese superstar has retrived from injury and is in superb form. The former Liverpool striker has has scored 6 goals and contributed 3 assists for the Bundesliga giants in 14 appearances. If things go as per plan, Mane may create history in the 2022 FIFA World Cup.

10: Luka Modric (Croatia): Last, but not the least, is this legendary midfielder of Real Madrid, with whom Croatians reached just ‘missed’ the World Cup in 2018. he won the golden ball in 2018. This time, Modric is determined not to lose as this would be his last chapter of the World Cup and he will definetely want to make it rememberable.