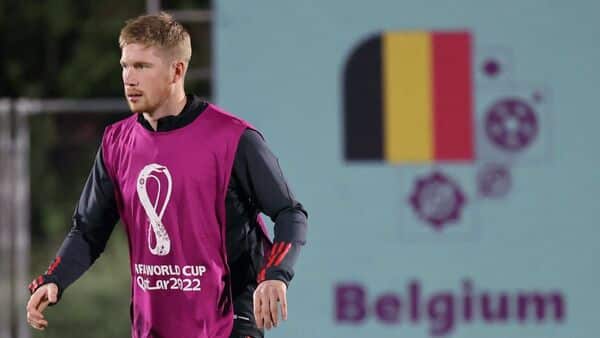 On November 24, European giant Belgium will face Canada in the Group F’s second game of FIFA World Cup 2022 at the Ahmad bin Ali Stadium, in Qatar.

Though for Belgium, their FIFA World Cup 2022 opener may be a final chance for a lot of their ‘Golden Generation’ to win a major tournament, but for the Canada – which is playing their first World Cup fixture in 36 years – it is all about ‘belief, not hope’.

Belgium have lost in Euro 2020 and the previous Nations League’s finals, and it manager Roberto Martinez is now under tremendous pressure to prove his worth. Martinez – accused of not knowing how to win, following Belgium’s Nations League elimination to France — is looking for some magic on the field.

On the other side, Canada defied expectations to top the final group of CONCACAF qualifying, which earned it an automatic qualifying place at Qatar 2022.

Belgium’s recent defeats against Netherlands and Egypt have built some pressure on the squad, but the country has not lost three on the spin since 2014.

Relying on Manchester City maestro Kevin De Bruyne may prove to be a great gamble, plus Inter Milan’s centre-forward Romelu Lukaku injury news may let Martinez to chose striker Michy Batshuayi, whose form in Turkey this seasom has been impressive. Belgian side is known to play attacking, while its defence needs some improvement. Hope it has been sorted by Martinez.

Looking at the Canadian side, which is making it comeback after 36 years in World Cup, the spirits are on the higher side under John Herdman. The Maple Leafs, nick name for the Canadians topped the final section of qualification in the CONCACAF region ahead of Mexico and the USA.

Despite a less experienced side, the Maple Leafs would definitely like to use this tournament as a free hit in their preparation for the 2026 World Cup on home soil.

One more concern for the Maple Leafs, that may go in Belgian favour is their away form. With 2 wins in seven matches on the road in qualifying, Belgians would like to take an advantage of it.

Belgium would heavily rely on Manchester City midfield maestro Kevin De Bruyne, who has 155 goal involvements in just 224 Premier League appearances. His passing the football does all the magic and the opponents look at him just like spectators. Apart from him, Fenerbahce’s striker Michy Batshuayi can turn tables. Romelu Lukaku’s will definitely be missed though.

The Mapple Leafs (Canada) will look forward to young stars Alphonso Davies and Jonathan David to win the match. However, Besiktas midfielder and squad’s captain Atiba Hutchinson is debuting in his first major tournament appearance almost 20 years after his debut and would like top make his presence felt.

The Argentina vs Saudi Arabia match will be broadcast live on the Sports18 and Sports18 HD TV channels in India and Jio Cinema’s app and website will both offer free live streaming of the event.

With Belgium having more experience and appearance in the World Cups, experts predict a better chance for the Belgian side to win against the inexperienced Canada. We predict: Belgium 3-1 Canada.

Denial of responsibility! My droll is an automatic aggregator of the all world’s media. In each content, the hyperlink to the primary source is specified. All trademarks belong to their rightful owners, all materials to their authors. If you are the owner of the content and do not want us to publish your materials, please contact us by email – [email protected]. The content will be deleted within 24 hours.
Belgium vs CanadaBelgium vs Canada predictionFIFA World Cup 2022FIFA World Cup 2022 in QatarFIFA World Cup Qatar 2022John HerdmanJonathan Davidkevin de bruyne
0
Share