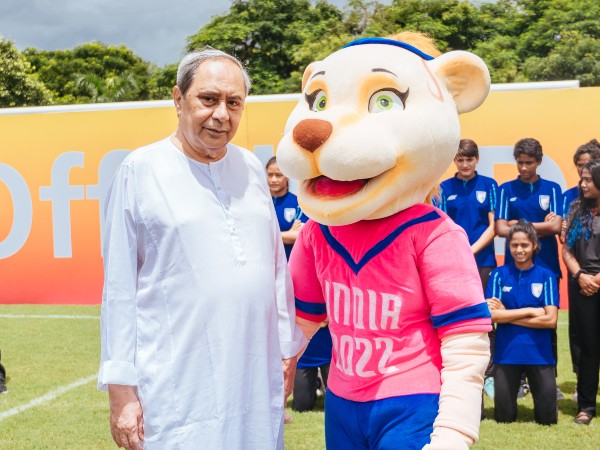 Talking about the mega event during the launch of the logo, Patnaik said, “Odisha is emerging as a leading sports destination and hosting the FIFA U-17 Women’s World Cup India 2022 is a momentous opportunity for our state.

“The official Host City Logo launch of Odisha is an important milestone which also signifies the progress of women’s football. We are excited to host the best young female footballers from across the world and especially, the Indian team who will be playing all their group stage games at the Kalinga Stadium.

“As the Indian team makes their first appearance in a FIFA women’s competition, I encourage the people of Odisha to show their support in strong numbers at the stadium,” added Patnaik.

The official Host City Logo of Odisha is a composite that presents the official emblem of the FIFA U-17 Women’s World Cup India 2022TM️ beside a specially designed artwork that showcases the rich cultural heritage, vibrant sporting ecosystem and overall splendour of the state.

Project Directors of the Local Organising Committee (LOC) for the tournament, Ankush Arora and Nandini Arora, encouraged the people to visit the Kalinga Stadium in Bhubaneswar.

“The state of Odisha has been forthcoming, proactive and generous with their support, time and initiatives. We are very thankful to the Hon’ble Chief Minister Shri Naveen Patnaik and all other stakeholders who have left no stone unturned in preparing to successfully conduct the FIFA U-17 Women’s World Cup India 2022TM️.

“It gives us great pleasure that everyone remains aligned in their vision of making sure all participating nations enjoy great hospitality as they ready themselves to enthrall audiences with their skill and talent. This youth World Cup is also a wonderful opportunity for the people to watch the best young international footballers live from the stadium and show support for women’s football, which is fast progressing,” said LOC Project Directors, Nandini Arora and Ankush Arora, in a joint statement.

The event also inaugurated a special initiative for school children called the Kick Off The DreamTM️ Football carnival. This carnival, aimed at introducing football to children and leveraging its power to normalize gender-inclusive participation, features fun football-themed games and activities as well as one five-a-side football pitch and two three-a-side football pitches. The Kick Off the DreamTM️ Football Carnival will engage nearly 60,000 school children over 35 days and conclude on 17th October 2022.

Hosts India – drawn alongside USA, Morocco and Brazil – will be playing all of their group stage games at the Kalinga Stadium, Bhubaneswar, and the tickets for the games can be purchased from fifa.com/tickets.