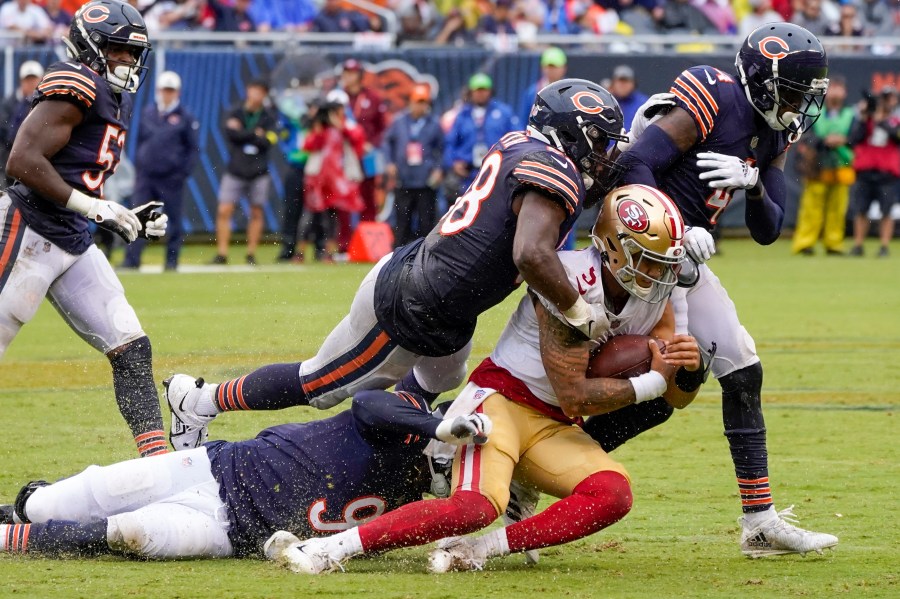 CHICAGO (AP) — Justin Fields threw for two second-half touchdowns, Eddie Jackson set up a TD with an interception and the Chicago Bears gave Matt Eberflus a win in his head coaching debut, beating the San Francisco 49ers 19-10 on a rain-soaked Sunday.

Fields shook off a rough first half, throwing a 51-yard TD to Dante Pettis in the third quarter and connecting with Equanimeous St. Brown for an 18-yarder early in the fourth to put Chicago on top 13-10. Jackson then picked off Trey Lance near midfield for his first interception since 2019 and returned the ball to the 21. That led to a 6-yard touchdown run by Khalil Herbert, making it 19-10.

San Francisco running back Elijah Mitchell left the game in the first half with a knee injury and did not return. Niners star tight end George Kittle missed the game because of a groin issue.

Heavy rain flooded the area and drenched the new Bermuda grass installed this week instead of the traditional Kentucky bluegrass used in a stadium often criticized for its choppy surface. As the final seconds ticked away, Bears players took head-first dives into the soggy end zone.

The Bears also got called for an unusual penalty near the end of the first half, when their holder got flagged for bringing out a towel to dry a small area of the field ahead of a field goal try. The 15-yard unsportsmanlike penalty wiped out a scoring opportunity and forced Chicago to punt.

Fields, the No. 11 overall pick in 2019, was 8 of 17 for 121 yards with two touchdowns and an interception. The former Ohio State star is trying to convince Eberflus and new general manager Ryan Poles he can solidify a position that has long been a weakness for Chicago.

The Bears were outgained 331 yards to 204. But they did enough to get the win for Eberflus, who spent the past four years as Indianapolis’ defensive coordinator.

Lance, drafted eight spots ahead of Fields, completed 13 of 28 passes for 164 yards and a touchdown.

Deebo Samuel ran for a 6-yard score in the second quarter after losing a fumble deep in Chicago territory in the early going. But he caught just two passes for 14 yards.

Nick Bosa added a sack. But the Niners, coming off a run to the NFC championship game, couldn’t get much going against “The Monsters of the Midway.”

49ers: Mitchell — who set a franchise rookie record with 963 yards rushing last season — ran for 41 before exiting in the second quarter.

Bears: The Bears announced no injuries during the game.

IRE-XI vs CZR Match Prediction Who Will Win Today European Championship, 2022 Group A