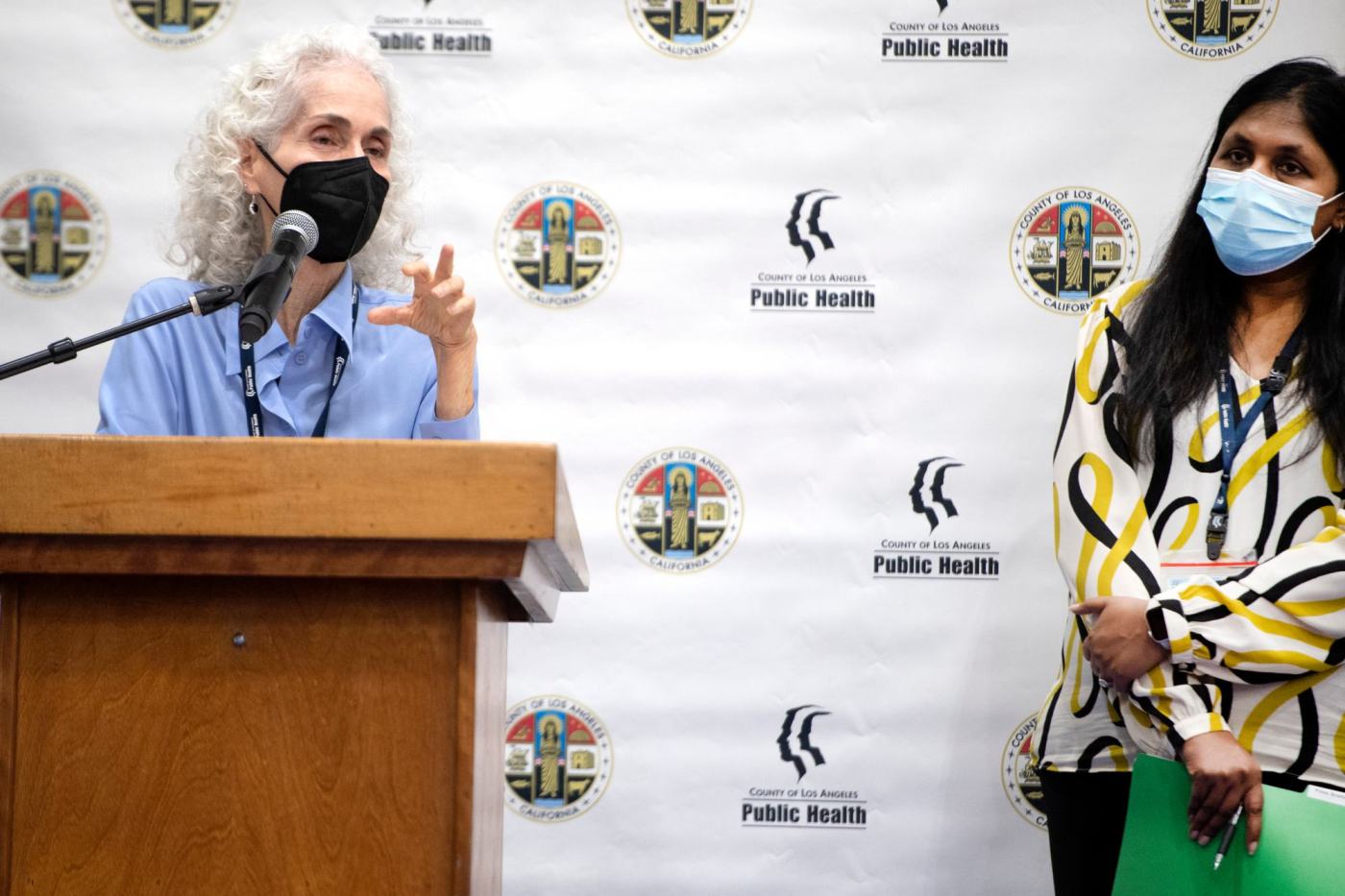 Los Angeles County Public Health Director Barbara Ferrer on Thursday, Sept. 8, doubled down on her position that students and staff on school campuses must wear a mask indoors for 10 days if they’ve been in close contact with someone who tested positive for the coronavirus, despite increasing pressure to drop the mandate.

The latest pressure comes from a group of superintendents representing about two dozen school districts across the county. Earlier this week they sent a letter to the county Department of Public Health and the Board of Supervisors, urging officials to remove the mask-wearing rule for students and staff who are close contacts of a COVID-positive person, but show no symptoms.

The department’s current health order requires those close contacts to wear a mask indoors for 10 days — and get tested within three to five days — after exposure, in order to avoid quarantining at home.

During her weekly briefing with reporters, Ferrer noted the indoor masking mandate for close contacts is a countywide rule, not just for school settings. Additionally, she said it’s critical for close contacts to wear a mask because some may be infected but not realize it — a COVID-positive person could infect others two days before they have symptoms.

“We do think, particularly with the data coming in from the schools that shows a fair number of outbreaks, lots of clusters of cases, that while transmission is still elevated, good idea for everyone to have to go ahead, when they’re indoors, to put on those masks,” Ferrer said.

She said the department may want to wait until COVID-related mortality rates drop significantly lower before removing the mandate.

“As public health folks, we’re going to always be, I think, a little more cautious because it’s still a relatively new disease,” said Ferrer, adding that the impacts of long COVID and impacts to those who have been infected more than once are not yet fully understood.

She also responded to the superintendents who wrote to her earlier this week, in a letter on Thursday.

“We all have the same long-term goal in relation to COVID-19 safety measures – a lifting of existing required protocols and a return to less constraining guidance around daily activities, but only when conditions and the science indicate it is safe to do so,” Ferrer wrote.

Palos Verdes Peninsula Unified School District schools chief Alex Cherniss, one of the superintendents who signed the Sept. 6 letter to county officials, expressed dissatisfaction with the department’s response and noted that three more superintendents had signed the original letter after it was sent.

Notably missing from that list is the Los Angeles Unified School District — the state’s largest with more than 430,000 students.

Ferrer noted during her media briefing that while some people are unhappy with the mask mandate, others have told the county they think more stringent protocols are in order.

She Ferrer touted the safety of a newly approved COVID-19 vaccine booster that targets the Omicron variant of the virus, comparing the adjustments in the shot to those performed annually for the flu vaccine to address new strains of the illness.

The newly approved booster shots became available at vaccination sites around L.A. County on Wednesday, directly targeting the BA.4 and BA.5 subvariants of Omicron. BA.5 is believed to be responsible for the vast majority of infections in the county and nationally.

“Since the new booster directly targets the most dominant subvariant circulating at the moment, we’re hopeful that by getting this bivalent booster, everyone eligible will be able to have greatly increased protection against the current strains of the virus, providing increased protection, as we know, against both severe disease and even getting infected in the first place,” Ferrer said.

The county on Thursday reported 1,767 new COVID-19 infections, raising the cumulative total for the pandemic to 3,423,672. Another 15 virus-related deaths were reported, giving the county an overall death toll of 33,334.

Health officials have noted that official case numbers are likely low because many people rely on at-home tests and do not report the results to the county.

According to state figures, there were 780 COVID-positive patients in county hospitals as of Thursday, down from 783 a day earlier. Of those patients, 101 were being treated in intensive care.

County officials have said that about 43% of patients with COVID were actually hospitalized due to virus-related illness, while the rest were admitted for other reasons, with some only learning they were infected when they were tested upon admission to the hospital.

The average daily rate of people testing positive for the virus was 7.6% as of Thursday, roughly the same as the past week.

Also Thursday, officials announced that one person in L.A. County who was diagnosed with monkeypox has died, and that the case is under investigation to determine whether the virus was a contributing factor in their death.

To date, there have been 56,026 monkeypox cases reported worldwide, with more than 21,000 confirmed cases in the U.S. California leads the nation with 4,140 cases, which includes 1,694 cases in L.A. County, according to Dr. Rita Singhal, chief medical officer for the county’s public health department.

Officials also announced that the monkeypox vaccine is now available to more people. This includes individuals who self-attest to belonging to one of the following groups:

Was surprised that even my 60’s were touted as failures: Virat Kohli