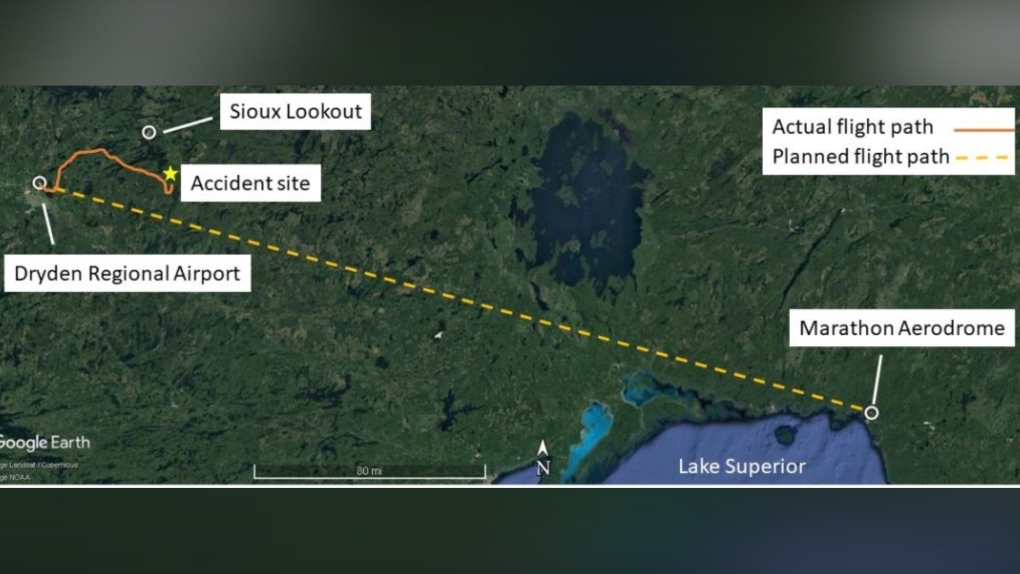 The pilot of a small plane that crashed in Northern Ontario in April — killing everyone aboard, including two men wanted for murder in B.C. — was not qualified to fly in the conditions present that night, according to the Transportation Safety Board.

The fatal flight took off from Dryden, Ont. on April 29 at 9:02 p.m. and was reported overdue at its destination in Marathon, Ont. at 1:39 a.m. on April 30. The wreckage was found soon after.

“The aircraft had impacted terrain in a wooded area during the hours of darkness. The pilot and 3 passengers were fatally injured. The aircraft was destroyed,” a report on the crash issued by the TSB Wednesday says.

“The airframe broke apart in a manner consistent with a cartwheeling motion, and both fuel cells ruptured,” the report later adds.

The pilot received his commercial license in 2019, but had not completed the requisite number of night flights in a six-month period prior to the crash. In addition, the TSB found he was not certified to fly in what are called “instrument meteorological conditions.”

The report explains that this means conditions in which a pilot can not rely on visual cues alone for navigation. While not all night flights require this certification, the TSB concluded that this one did due to the cloud cover and remote location.

The report also found that the plane was overweight by 170 pounds.

An image provided by eth Transportation Safety Board shows the location of a fatal plane crash in April of 2022.

Among those killed was Gene Karl Lahrkamp. News of the crash came just days after he was placed in the second-highest spot on Canada’s Be on the Lookout list of top 25 fugitives, and a $100,000 reward was offered for any information leading to his arrest.

Lahrkamp was wanted in connection with the shooting death of Abbotsford, B.C., gangster Jimi Sandhu. Authorities said Sandhu was killed in Thailand on Feb. 5 and a subsequent investigation in that country found he had been targeted by two Canadian men who flew home days after the murder.

Thai police ultimately charged Lahrkamp and a second suspect, Mathew Dupre, with murder. Dupre was arrested in Alberta in February and remains in custody while awaiting an extradition process.

Another passenger on the plane was Duncan Howard Bailey. The Canadian Press uncovered that a warrant was issued for Bailey on April 26 – the same day Lahrkamp was named on the BOLO list.

Bailey’s indictment shows he was charged alongside two other men for attempted murder and conspiracy to commit murder in an attack on Mir Aali Hussain on Oct. 6, 2020.

Bailey’s last court appearance in Vancouver was April 4 and the arrest warrant was for an unspecified breach of his bail conditions.

The crash raised questions about how and why two B.C. men wanted in connection with murder plots ended up on the same small plane in a remote part of Ontario. At the time, B.C.’s anti-gang unit said it was investigating their connection.

The other two men on the flight have been identified as Abhinav Handa and Hankun Kong, both of Richmond, B.C. Neither has a record of criminal charges, according to publicly available online records.