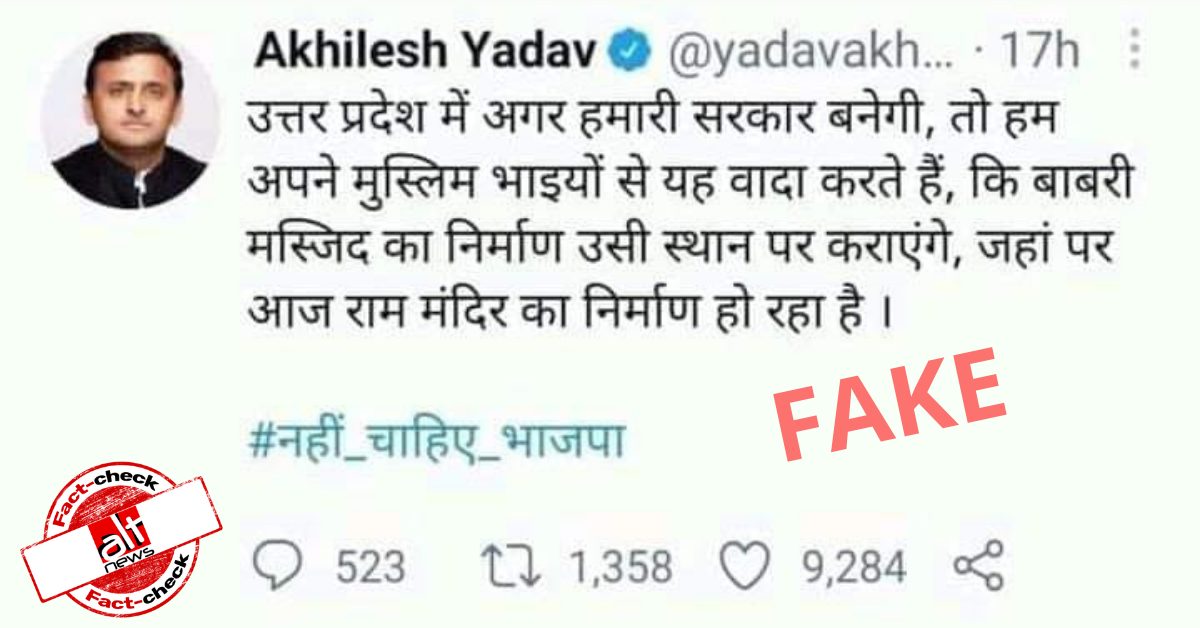 The Uttar Pradesh assembly elections will be conducted in 2022 and political misinformation ahead of the polls have begun making the rounds. A screenshot of an alleged tweet by Samajwadi Party president Akhilesh Yadav has been shared online. “If our government comes to power in Uttar Pradesh, we promise our Muslim brothers that we will reconstruct the Babri Masjid at the same place the Ram Mandir is being built today,” the purported tweet reads.

Twitter user Murli Goyal, whose followers include prime minister Narendra Modi, tweeted the screenshot and wrote, “To all the people of Uttar Pradesh, have you seen this statement by your leader Mr Akhilesh Yadav? If not, then open your eyes and take a look. Earlier everyone was thinking Ram Mandir would not be built if the Samajwadi Party government came to power. Now you decide whose party to elect into power in 2022.” (Archive link)

Alt News performed a keyword search using the text in the alleged tweet. However, we could not find any such post on Akhilesh Yadav’s Twitter timeline. It is possible that the tweet has been deleted so we took to archive websites (archive.is, webarchive.org) to locate an archived version. But this too did not render results.

Upon further examination of the text in the post, we discovered that the tweet is misaligned. We have compared the viral tweet with a genuine tweet below to highlight the difference. Since the viral screenshot appears to have been taken on a mobile phone, we have compared it with a screenshot of a genuine tweet on a mobile phone. Readers are requested to zoom in on the comparison and carefully notice that the comment icon on the genuine tweet does not touch the line of alignment.

It must be pointed that had Akhilesh Yadav made such a controversial statement on Ram Mandir, it would have garnered widespread media coverage. A lack of reports further points that the tweet is fake. Over the past few years, Yadav has not criticised the Supreme Court’s verdict. In 2019, he had tweeted that decisions that bring people closer, make us better human beings and last year he said that he will visit the temple with his family once the construction is completed.

Therefore, a fake tweet was made viral to show Akhilesh Yadav promising the Muslim community that Babri Mandir will be reconstructed on the land it used to exist and where the Ram Mandir is now being developed.