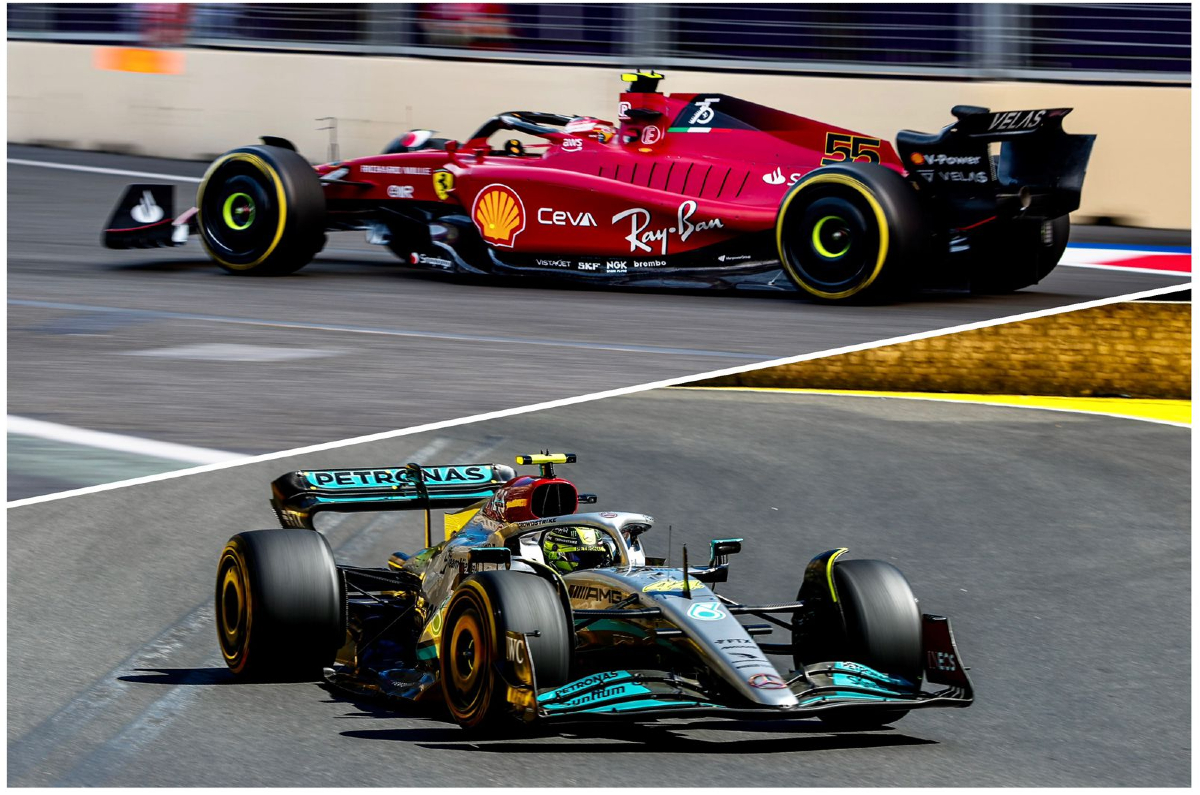 Porpoising has been the big talking point in F1 this year, with several drivers voicing their complaints. The bumpy Baku street track only exacerbated this issue at the Azerbaijan GP, where we saw Lewis Hamilton struggling to get out of his car after the race due to a sore back. Even Pierre Gasly admitted that this could lead to drivers suffering long-term health issues.

In response to this, F1’s governing body, the FIA, has issued new technical directives to reduce porpoising “in the interests of safety”. At first glance, this may seem like something that could work in Mercedes’ favour; after all, they’ve been the most vocal in their complaints. But a closer look at the directives suggests the exact opposite.

2022 sees the return of ground effect cars, which work by creating a low-pressure area between the floor of the car and the track surface to generate downforce. But this brings back one big gremlin – porpoising. The phenomenon refers to violent bouncing at high speeds, and we’ve seen plenty of examples this year. It’s caused by cars losing and regaining downforce in quick succession.

While some teams like Red Bull seem to have found a solution around this phenomenon, others like Mercedes are still struggling with it. Increasing ride height could be one solution to this, but that will come at the cost of pace because teams want their cars running as close to the ground as possible. As anyone familiar with F1 would know, when given the choice between pace or comfort, most teams and drivers will always pick pace. And this is exactly why the FIA has decided to intervene.

The FIA has issued two directives to control porpoising in the short term. The first of these is “closer scrutiny of the planks and skids, both in terms of their design and the observed wear.” In other words, the FIA will be looking at whether the cars are hitting the ground too aggressively.

Next up, the FIA will determine a metric to define an acceptable limit of “vertical oscillations” or bouncing. The exact mathematical formula for this metric is still being analysed and F1 teams have been invited to weigh in on this.

How will this impact the teams?

While we’re still awaiting clarity on exactly what the FIA wants to do, the new technical directives suggest it’s putting the onus on the teams. If a team’s cars are determined to be bouncing too violently, they will have to alter their set-up, or potentially raise ride height to combat that, taking a direct hit in terms of outright pace.

So this shouldn’t impact teams like Red Bull and Aston Martin, who don’t seem to be suffering with porpoising too much. But teams like Mercedes may end up having to compromise set-up and pace to meet this new requirement.

This could impact the title fight as well. Ferrari’s Carlos Sainz has also been quite vocal about how much porpoising his car is suffering. So Ferrari could very well be one of the teams that will have to make set-up changes – something the Italian team definitely does not need while it’s still struggling to come to grips with its engine reliability problems.

Why is the FIA controlling porpoising?

It may seem excessive for the FIA to intervene here, but it all boils down to safety. “In a sport where the competitors are routinely driving at speeds in excess of 300kph, it is considered that all of a driver’s concenteration needs to be focused on that task,” the FIA said in its statement. Excessive fatigue or pain experienced by a driver could have significant consequences should it result in a loss of concentration, it added.

Additionally, the FIA has also cited concerns about the immediate impact this could have on the physical health of drivers, several of whom have reported back pain.

It’s important to note that the new technical directives are meant to be just band-aid solutions. For the medium term, the FIA is also working with teams to define measures that will reduce the ground effect cars from bouncing aggressively in the first place.