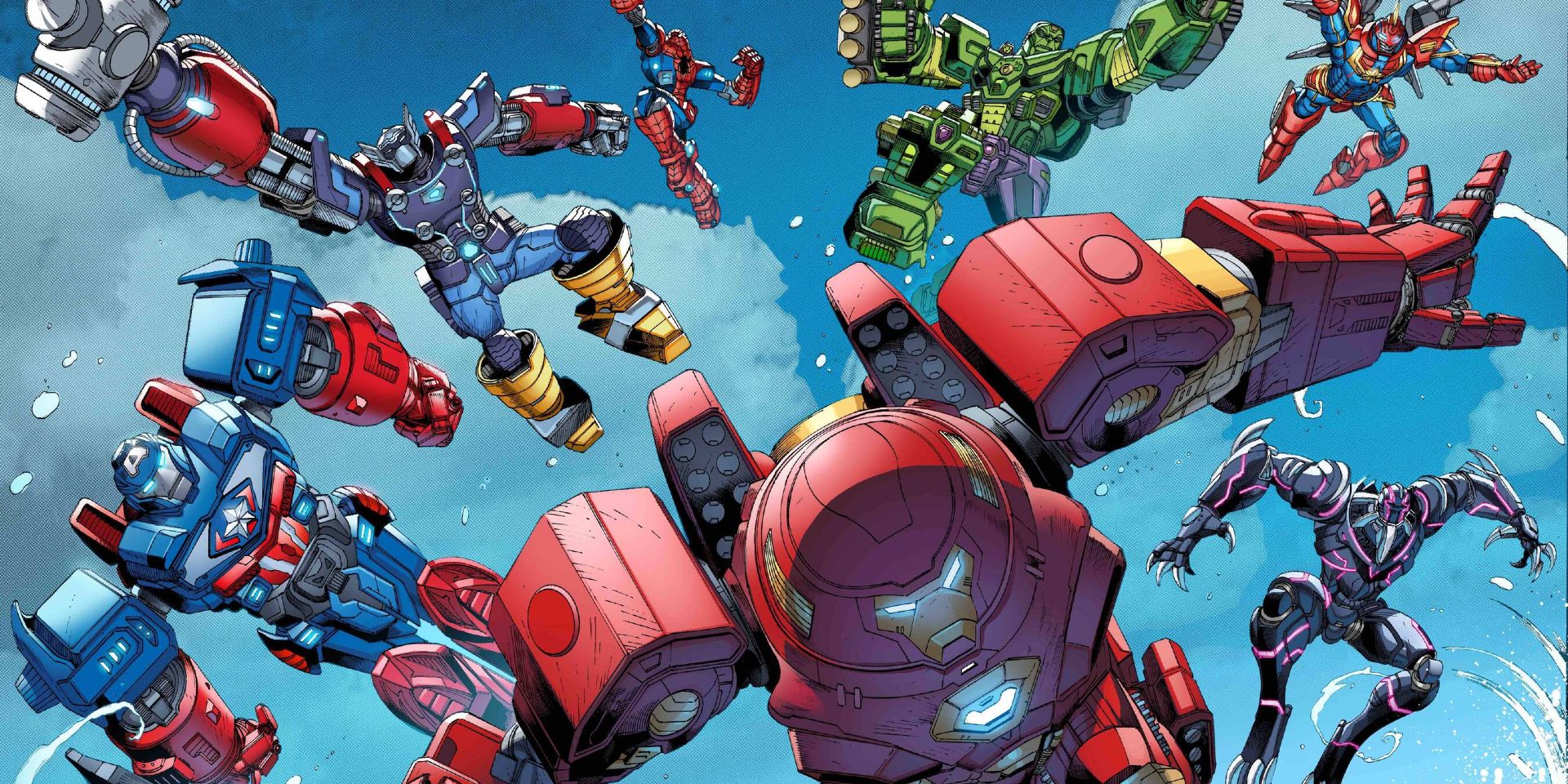 A monster unlike any the Avengers have ever seen just arrived and the whole team will suit up in power armor to fight it in Avengers: Mech Strike.

As if the Avengers weren’t already a force to be reckoned with, an upcoming Marvel miniseries, Avengers: Mech Strike, will see the team become even more OP when every member goes into battle with custom-made Iron Man-esque mech suits of their own.

The series, which will be written by Jed MacKay with art by Carlos Magno, will see the superhero team facing, as Marvel’s preview calls it, “one of their biggest battles yet” as they face off against a bizarre, “biomechanoid” creature from another world that seems to be decimating Manhattan. The monster is unlike anything the team has ever seen and seems to be able to ward off any attack they throw at it. And the worst part? More of these gargantuan beasts may be on their way. Even with the Avengers’ combined might, they seem to be fighting an uphill battle and are going to need new tech, tactics and weapons if they hope to stand a chance. Enter Tony Stark, who apparently is prepared for just this sort of occasion.

According to Marvel’s preview, “confronted with an unstoppable new menace, one that is seemingly impervious to their every strength! But the Avengers aren’t so easily beaten, and when new threats arise, powerful new tools must be brought to bear!” From the pages teased by Marvel, it seems that Black Widow, Black Panther, Captain America, Hulk, Thor, Spider-Man and even Captain Marvel are all getting a new, Arc Reactor-powered wardrobe to face this threat. Check out the series’ trailer and some preview pages from Marvel below.

Apparently the book is going to waste no time getting right into the action, with MacKay promising things get going from the second page of the very first issue.  He went on to say that, “Mech Strike has been an interesting and exciting series to work with – taking a potentially silly concept like ‘the Avengers have power armor now’ and playing it deadly straight-faced has been a lot of fun, and we can’t wait for people to check it out!“

This obviously won’t be the first time Tony has provided other heroes with his tech. War Machine has worn Stark-created armor for decades in the comics. On film, along with War Machine, Bruce Banner, Pepper Potts and Peter Parker have all sported super advanced suits courtesy of Tony. So it should be thrilling to see what plays out when the entire team is is dressed in matching attire.

As exciting as the prospect of seeing a veritable army of Iron Man-suited Avengers going into battle is, this miniseries raises a pretty obvious question. Why is Tony only now breaking out this gear? The trailer shows his armory of suits just waiting for heroes to fill them. So if Tony has had these suits collecting dust in his basement for who knows how long, what has he been waiting for? Sure, the likes of Hulk and Thor are undeniably formidable on their own, but non meta-humans like Hawkeye and Black Widow probably wouldn’t have turned down the chance to literally suit up before heading into past battles. Given Stark’s signature flippancy, maybe he just forgot he even had them? Only time will tell when Avengers: Mech Strike #1 hits store shelves and digital platforms on February 3.

Next: Every Marvel Character Who Has Worn Iron Man Armor In The MCU So Far

Kim Cattrall Not Returning As Samantha For Sex & The City Revival

Kevin Phelan has been obsessed with comic books, films, and movies his whole life and can’t believe people pay him for it now. He spent years covering entertainment news for The USA Today Network. His work has been featured in outlets including USA TODAY, The Huffington Post and Cracked.com. Outside of work, you can find him continuing his quest to pet every dog in the state of New York.

If you have any of this ice cream in your freezer, throw it out – BGR