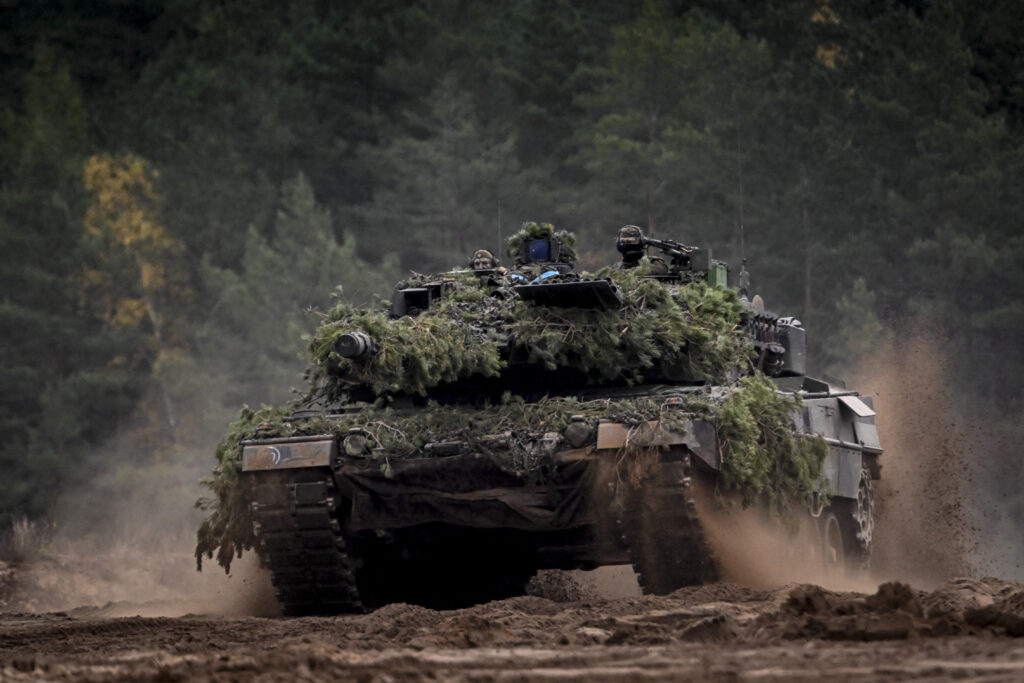 BERLIN — Germany and its European partners plan to “quickly” send two Leopard 2 tank battalions to Ukraine — suggesting about 80 vehicles — the government in Berlin announced Wednesday, adding that Germany would provide one company of 14 Leopard 2 A6 tanks “as a first step.”

Other countries likely to send Leopards to the war against Russia include Poland, Spain, Norway and Finland.

The decision by Chancellor Olaf Scholz — which emerged on Tuesday evening — marks a decisive moment in Western support for Ukraine in its fight against Russian aggression, which entered its 12th month this week and could soon heat up further as Moscow is expected to launch a new offensive.

German Defense Minister Boris Pistorius told reporters that the training of Ukrainian crews on the tanks will begin “very soon,” and that the Leopards will be arriving in Ukraine in about two months.

Ukrainian President Volodymyr Zelenskyy said he was “very happy” with the promise of tanks from the U.S., Germany and Britain. “But speaking frankly, the number of tanks and the delivery time to Ukraine is critical,” he said, in an interview with Sky News.

Andriy Yermak, the head of Zelenskyy’s office, welcomed the German announcement as a “first step.”

“Leopards are very much needed,” he said on Telegram.

Zelenskyy himself also welcomed the move on Twitter. “Sincerely grateful to the Chancellor and all our friends in” Germany, he said.

Russia’s Ambassador to Germany Sergei Nechaev said in a statement the decision was “extremely dangerous,” and took the conflict “to a new level of confrontation.”

Kyiv had long urged Germany and other partners to supply its army with the powerful German-built Leopard 2 tank, but Scholz hesitated to take the decision, partly out of concern that it could drag Germany or NATO into the conflict. He remained adamant that such a move had to be closely coordinated and replicated by Western allies, most notably the United States.

During a speech in Germany’s parliament on Wednesday, Scholz sought to defend his long hesitations on tank deliveries, saying that it “was right and it is right that we did not allow ourselves to be rushed” into taking a decision but insisted “on this close cooperation” with allies, notably the United States.

Scholz also stressed that Germany would not actively engage in the war but would continue to seek to “prevent an escalation between Russia and NATO.” He also launched a direct appeal to German citizens who might be skeptical: “Trust me, trust the German government: We will continue to ensure … that this support is provided without the risks for our country rising in the wrong direction.”

The news of an imminent announcement by U.S. President Joe Biden to send “a significant number” of American M1 Abrams tanks to Ukraine facilitated the chancellor’s decision. Scholz had come under huge pressure from European partners like Poland, as well as his own coalition partners in government, to no longer block the delivery of the German tank. Since they are German-made, their re-export needed the approval of the German government.

“The goal is to quickly form two tank battalions with Leopard 2 tanks for Ukraine,” a German government spokesperson said.

“As a first step, Germany will provide a company of 14 Leopard-2 A6 tanks from Bundeswehr stocks. Other European partners will also hand over Leopard-2 tanks,” the spokesperson added.

The spokesperson also said the training of Ukrainian crews on the tanks “is to begin rapidly in Germany.” Berlin would also provide “logistics, ammunition and maintenance of the systems.”

Möller wrote that Ukrainian tank crews will undergo a six-week-training on the Leopards, in Germany which is supposed to start in early February. “This procedure should enable the Leopard 2 A6 to be taken over by Ukraine by the end of the first quarter of 2023.”

Germany will provide partner countries like Spain, Poland, Finland and Norway, which “want to quickly deliver Leopard-2 tanks from their stocks,” the necessary re-export permission, the spokesperson said.

NATO Secretary-General Jens Stoltenberg tweeted that he “strongly welcomes” Berlin’s decision. “At a critical moment in Russia’s war, these can help Ukraine to defend itself, win & prevail as an independent nation.”

Spain, which owns one of the largest fleets of Leopards in the EU, with 347 tanks, has previously said it would send tanks to Kyiv as part of a European coalition, according to El País.

The Norwegian government is considering sending eight of its 36 Leopard tanks to Ukraine, but no decision has been made yet, Norwegian daily DN reported late Tuesday after a meeting of the parliamentary committee on foreign affairs and defense, quoting sources close to the deliberation.

Portugal, which has 37 Leopards, could provide four tanks to the assembling European coalition, a source close to the government told Correio da Manhã late on Tuesday.

The Netherlands, which is leasing 18 Leopards from Germany, is also weighing supplying some of their armored vehicles, Dutch newswire ANP reported, quoting a government spokesperson. On Tuesday, Dutch Prime Minister Mark Rutte said he was “willing to consider” buying the tanks from Germany and shipping them to Ukraine, but that no decision had been made.

On Wednesday, the Swedish defense minister said that Sweden did not exclude sending some of its own tanks at a later stage, according to Swedish daily Svenska Dagbladet.

This article was updated.

This Ridiculous Robot Will Retrieve the Samples We’ve Left…

Mile 0, a musical prequel to the acclaimed procedural…