EURO 2020 photos: Top 6 memorable moments that will live on for years 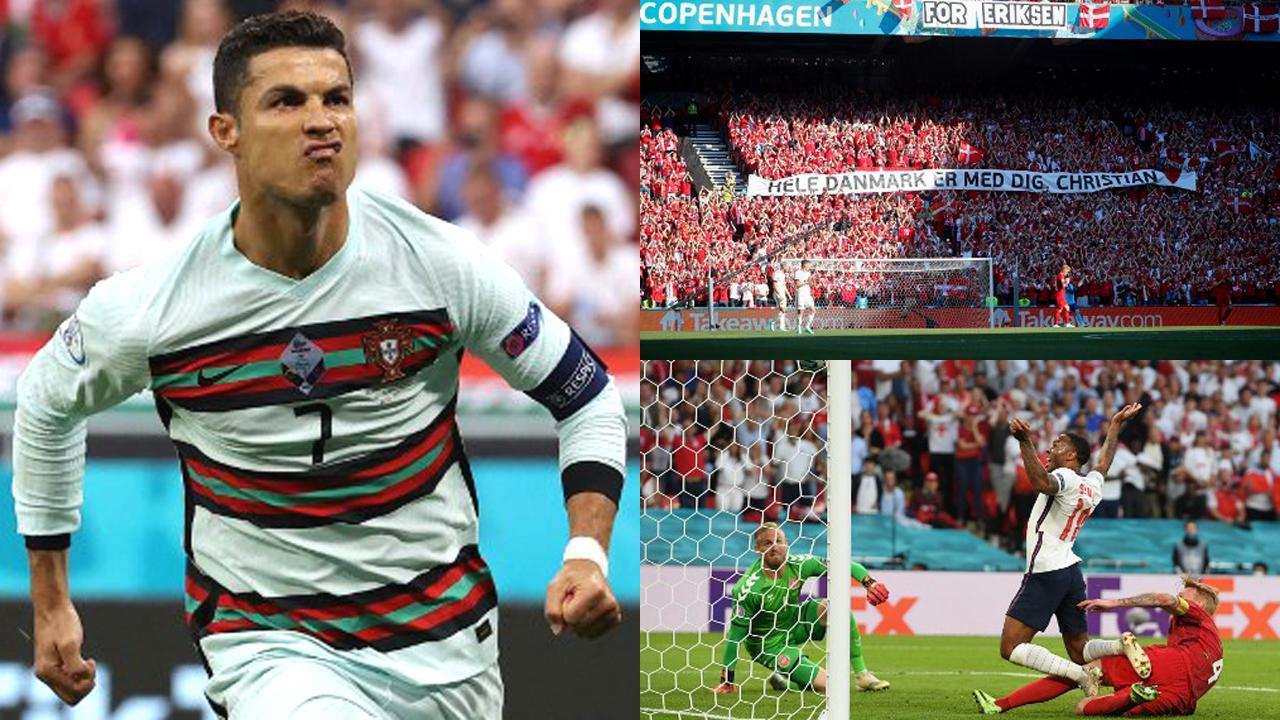 Football is a sport that thrives on emotion and emotions were running high all through the Euro 2020 tournament.

The Euro 2020 season came to a close with Italy defeating England in a dramatic penalty shootout following a draw at 120 mins at Wembley. Italy and England drew 1-1 with Bonucci and Shaw scoring for their respective teams. Italy would then go on to win the penalty shootout 3-2 to win their second Euro title.

Football fans were treated to a brilliant spectacle as many teams and footballers enthraled the crowd with some spectacular performances. The fans got to witness some epic moments during the tournament.

Let us take a look at some of the most thrilling moments in Euro 2020 that will be etched in the memories of the fans for years to come.

Denmark`s supporters clap during a round of applause and hold a banner in support of Denmark`s midfielder, Christian Eriksen, during the UEFA EURO 2020 Group B football match between Denmark and Belgium at the Parken Stadium in Copenhagen on June 17, 2021. Christian Eriksen collapsed on the field during Denmark`s opening game after he suffered a cardiac arrest and was hospitalised later.

Portugal captain and one of the world`s best footballers Cristiano Ronaldo created history in his team`s opening match at the Euro 2020 after he scored a brace to become the all-time leading goalscorer in Euro history. At the post-match conference, Ronaldo was seated down when he spotted two bottles of an aerated brand, which he immediately shifted aside and kept a bottle of water in place of them, causing much controversy on the internet.

Unarguably one of the top footballers in recent years, Kylian Mbappe did not manage to put up a great show in the French outfit. The PSG forward went goalless the entire Euro 2020. During the Round of 16 games against Switzerland.

England faced Denmark in the Euro 2020 semis for a spot in the final. The match was drawn 1-1 at 90 mins. During the first half of extra-time, Sterling attempted a charge on goal and was tackled by Joakim Maehle followed by a penalty decision taken by the referee. During replays, not much contact could be seen on Sterling and many called it a controversial decision. Harry Kane went on to score the penalty and England thus earned a spot in the final after they won the match.

In a high-profile Euro 2020 final at Wembley, Italy and England drew 1-1 at the end of 120 minutes forcing the game to enter penalties. Italy went on to defeat the hosts 3-2 in penalties thus lifting the Euro title for the second time. For England, Marcus Rashford, Jadon Sancho, and Bukayo Saka missed their respective penalties much to the chagrin of the English fans leading to racist behaviour on social media and a major rucks at the stadium post the match.

Denial of responsibility! My droll is an automatic aggregator of the all world’s media. In each content, the hyperlink to the primary source is specified. All trademarks belong to their rightful owners, all materials to their authors. If you are the owner of the content and do not want us to publish your materials, please contact us by email – [email protected]. The content will be deleted within 24 hours.
christian eriksenCristiano Ronaldoeuro 2020EURO 2020 goalsEURO 2020 top momentsfootball triviakylian mbappeKylian Mbappe penalty
0
Share

Football trivia: Five interesting facts you may not know about Raul de Tomas