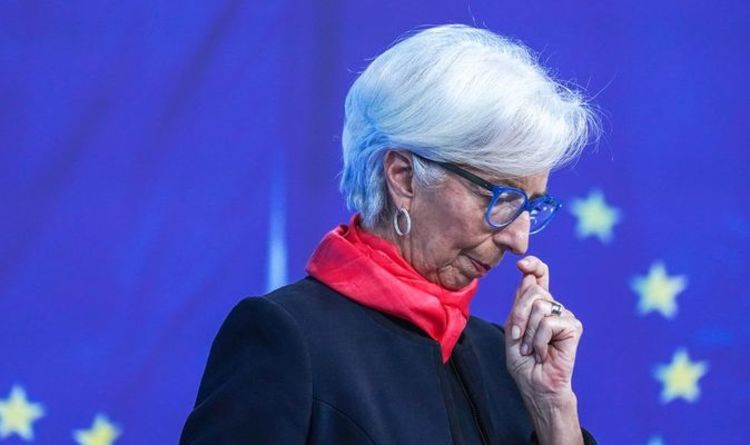 This evening US central bank the Federal Reserve will announce its decision on whether to raise interest rates with increased expectations of a hike since interest rates were cut back in 2020. If the Fed indeed moves in this direction it will put further pressure on the ECB to follow suit, with the bank having so far resisted calls to change interest rates. Matthew Ryan, Senior Market Analyst at Ebury, said: “The ECB is at risk of being left behind by its major peers altogether, most of which look set to engage in an aggressive tightening cycle this year. We think that higher rates elsewhere, rising inflationary pressures and growing signs of dissent among Governing Council members will make it very difficult for the ECB doves to continue getting their way for too much longer.”

Chief among the doves, those favouring lower interest rates, has been the ECB’s president Christine Lagarde who has frequently suggested there would be no hikes until at least 2023.

Recently Ms Lagarde insisted the ECB has “every reason not to act as quickly or as ruthlessly” as the US, telling France Inter radio she wanted to avoid “putting the brakes on growth.”

Ms Lagarde and the ECB have frequently tried to argue the Eurozone is in a different situation to other economies however Mr Ryan suggested “the recent spike in inflation in the (Eurozone) would suggest otherwise”.

Inflation was recently found to have reached five percent for the Eurozone in December with the European Union as a whole seeing it rise to 5.3 percent.

However Christopher Dembik, Head of Macro Analysis at Saxo Bank, predicted the ECB would “try to stay in a wait-and-see position for as long as possible, no matter what the pace of monetary policy in the US will be.”

He explained: “We shouldn’t compare monetary policy in the eurozone and in the US.

Inflation has become a widespread problem across major economies with UK levels hitting their highest in nearly 30 years at 5.4 percent.

As the Federal Reserve considers its next move today US inflation stands at a staggering seven percent meaning it will likely be a major consideration.

The starting gun on raising interest rates was started by the Bank of England in December with an increase to 0.25 percent.

With inflation continuing to rise in the UK expectation has grown for a further rate rise to come next week with markets pricing in as many as four in total across 2022.

Why Catwoman’s Fate Suggests Batman Was a Failure

What is Nvidia Broadcast? How to set up and use it

A Grand Wagoneer For Those On A Budget