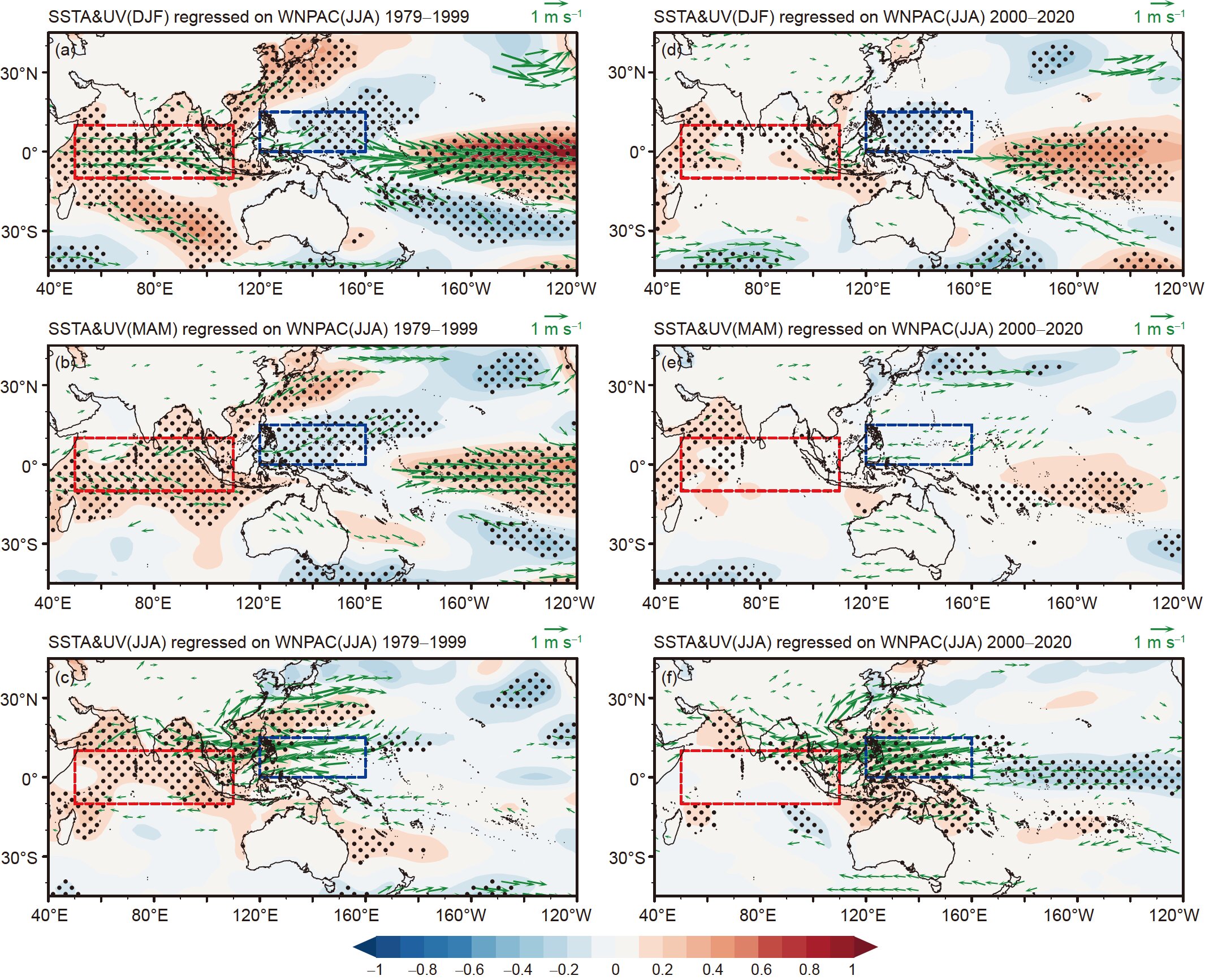 It has long been established that anomalous low-level Western North Pacific (WNP) anticyclone (WNPAC) exerts pronounced influences on the weather and climate over East Asia during the boreal summer. Its interannual variations are closely associated with the equatorial Pacific ENSO states in the previous winter; however, the mechanisms for their linkage remain controversial. So far, three possible physical mechanisms have been proposed to explain the maintenance of WNPAC during the ENSO decaying summer, that is, the local air-sea interaction, Indian Ocean capacitor effect and ENSO Combination mode (C-mode).

This study demonstrated that the influences of the local WNP and Indian Ocean (IO) sea surface temperature (SST) anomalies exhibit conspicuous decadal differences in maintaining WNPAC in summer. This decadal difference could be related to changes in the decaying speed of ENSO events. In contrast to El Niño events before the 2000s, El Niño events after the 2000s decay more rapidly, and the associated tropical central-eastern Pacific SST features a La Niña-like condition in the El Niño decaying summer. Concomitantly, no significant SST anomalies appear over the WNP and IO in the ENSO decaying phase, exerting a weak influence on the WNPAC.

Relative to the WNP and IO SST anomalies, the C-mode, originating from the nonlinear interaction between ENSO and the annual cycle, has a stable relationship with the WNPAC during the El Niño decaying summer for both pre- and post-2000 periods. The feasibility of the mechanism appears invulnerable to changes in the ENSO evolution features (i.e., ENSO decaying speed), suggesting a crucial role of the C-mode in the maintenance of the WNPAC. Considering the persistence of the ENSO combination mode, the WNPAC and associated climate variability during the El Niño decaying summer can be skillfully predicted at least one season in advance based on the ENSO C-mode.

Citation:
ENSO combination mode’s role in the maintenance of the anomalous anticyclone over North Pacific in boreal summer (2022, August 26)
retrieved 27 August 2022
from https://phys.org/news/2022-08-enso-combination-mode-role-maintenance.html