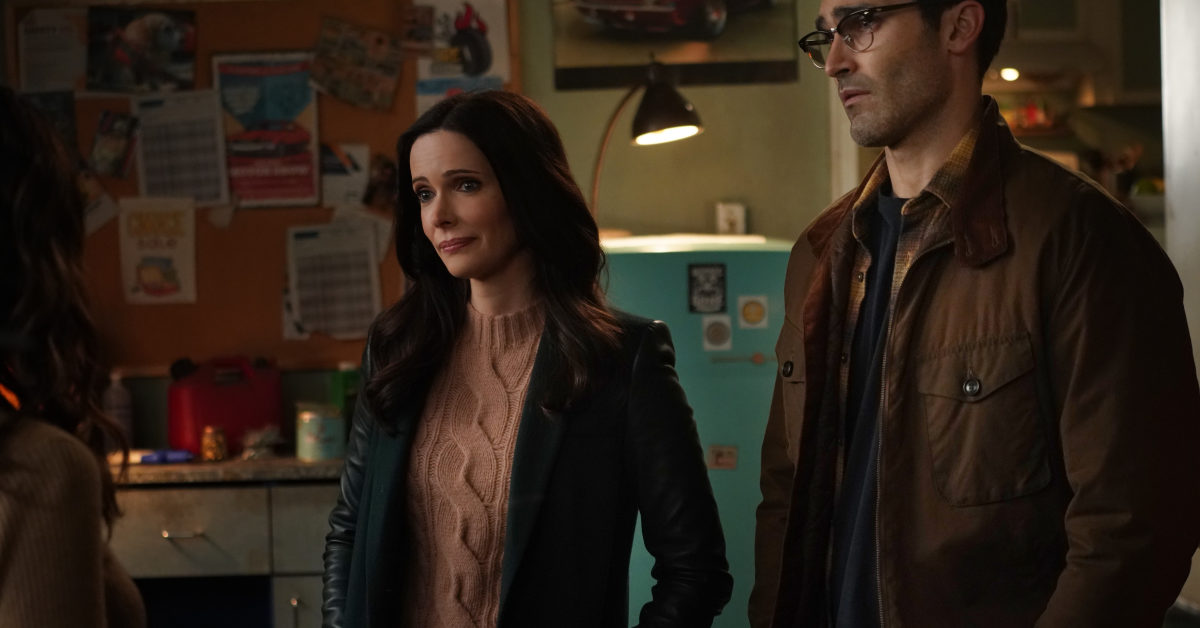 So let’s see where things stand with the third season of The CW’s Tyler Hoechlin & Elizabeth Tulloch-starring Superman & Lois. Jordan Elsass stepped down from his role as Jonathan Kent and then posted a video explaining he needed to take a break to consider where he wanted to take his career. Then Tulloch dropped a tease about an upcoming storyline for Lois Lane and confirmed that Supergirl star Melissa Benoist had “expressed interest” in appearing in the third season (more on those in a minute). After that, Arrowverse & non-Arrowverse actor/director David Ramsey confirmed that Chad L. Coleman (The Orville) would be joining the cast in a major villain role (confirmed by Coleman). And then, earlier this week, it was announced that Michael Bishop (Spin) would be joining the Kent family in Elsass’ old role. Wow. That’s a lot to process. But there’s no rest for the weary, as Tulloch has returned to check in via Instagram Stories to let us know that she’s had a “great first week back at work” on The CW series. And after the rollercoaster ride that was the past few weeks, a little good news like that is always nice to hear (here’s a look at a screencap):

“I read Season 3 Episode 1 [of Superman & Lois] on the plane last night. It’s great,” Tulloch shared with the crowd (and those watching at home, thanks to those kind enough to post their videos) at Fan Expo Canada 2022 during a Q&A panel. And while it’s still too early to know where exactly things are headed, Tulloch and Hoechlin like what they’re seeing. “Tyler and I were saying this season might be the most exciting from our point of view because we’ve been given the general arc of this season, and Lois’ particular storyline is like, ‘whoa!’ I did not have any idea they were going in that direction,” Tulloch added.

Also, during that Fan Expo Canada 2022 Q&A panel, Hoechlin & Tulloch were asked about the rumors that Benoist may be returning to the role of Supergirl during the upcoming season. “We have not heard that rumor about her coming on the show. She has expressed interest to me in doing it, and I know that we would love to work with her again and Grant [Gustin] and everyone else,” Tulloch replied. “I just don’t know…ever since we started the show, COVID has been a reality which is why we haven’t done any of the crossovers or anything like that, so we just can’t speak to whether or not that’s feasible.” Except, there’s a problem…

Showrunner Todd Helbing has already revealed a major complication to that happening. During the second season finale, it was confirmed that Superman & Lois didn’t have any Arrowverse crossovers because it was never set in the Arrowverse in the first place. Yup, still a bitter pill to swallow. So, for example, as we mentioned before about Ramsey’s John Diggle? Yeah, that’s the show’s version and now the Arrowverse version. So if Benoist’s Supergirl was to appear during the third or a future season, it would have to involve writing her a new backstory that works for the show (Helbing said as much during an episode of The Flash Podcast: “Yeah, it would not be the Supergirl from the Arrowverse, it would be our version so we would invent a new backstory for her”). Here’s a look at Tulloch’s response during the recent Fan Expo Canada 2022, where the question of Benoist’s return was asked and addressed (so let the speculation begin now)- with big thanks to Brief Take for posting the video: