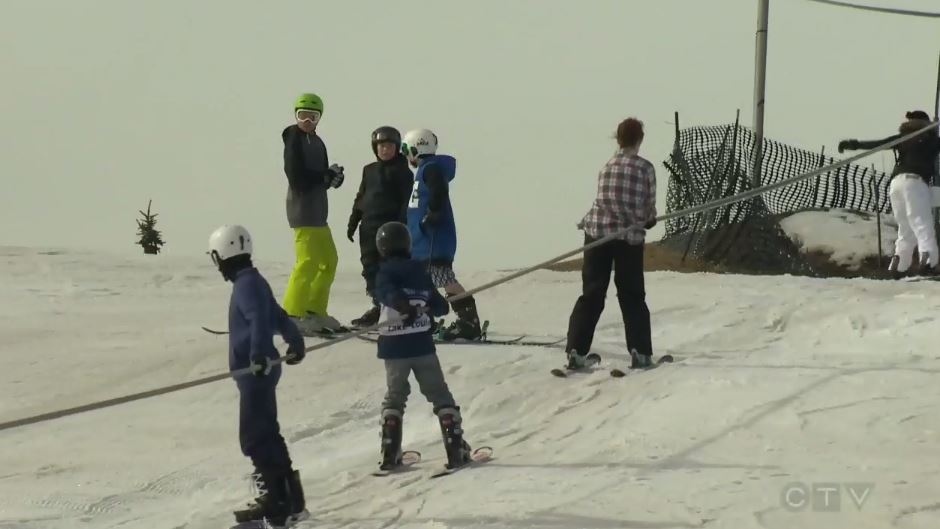 The Edmonton Ski Club is looking for the city’s support in a pair of multi-year funding asks to help keep the facility afloat as it modernizes its infrastructure.

The ski hill based in Gallagher Park on the south side of the North Saskatchewan River hopes the city will contribute $800,000 to cover the interim operation of modular buildings used as washrooms and a warming station for the next three years.

Part of that funding request includes the cost of demolishing the former ski lodge, which the city owns and partially condemned five years ago due to structural concerns.

The ski club operated the other half of that facility until this spring, when temporary modular structures were brought in that are also used to support the Edmonton Folk Music Festival.

Long-term, the club is looking to build a new $15 million net-zero ski lodge, with the federal government contributing $6.6 million. Edmonton Ski Club hopes that during the next city budget planning cycle for 2023-26, the hill would get $3.5 million to go toward the new facility.

The first request for $800,000 is slated to be discussed on Tuesday by council’s urban planning committee. Half of that money would be used in 2022-23.

City administration says that money could come from reserve funding or a tax hike of 0.05 per cent over three years.

“We don’t have ample space to provide all of the things that we need, such as (equipment) rentals, guest services for ticket distribution, and warm-in space, as well as washrooms,” said Zoe Sloan, the ski hill’s general manager.

“Anybody whose familiar with the actual facility on site, it’s quite obvious that it’s at the end of its life cycle,” Sloan added. “It’s really challenging to invite people down to an area to participate in a (winter) sport and not have ample space to warm up.”

According to a city report, if the skil hill doesn’t receive the requested funds to enable the lodge’s demolition, it would not operate this winter and beyond, with the city responsible for the demolition and removal of the ski lifts.

Continuing to operate out of the temporary modular buildings, which are rentals, would represent an unsustainable cost, Sloan said. In her view, the cost to decommission the lodge and remove the ski hill would also be “significantly higher” than what the hill is requesting.

The folk fest would also be impacted and need to bring in temporary infrastructure to support its annual activities.

‘WE ARE THE MOST AFFORDABLE SKI AREA’

A lease termination in December 2017 threatened to close the facility until the city and province provided $1 million in funding for three years.

“For an area that has been open for 110 years, that’s a long story,” Sloan said. “Stories of that longevity are going to have peaks and valleys, and we really do hope that this is a new chapter, as we continue to move toward the future.”

Sloan said losing the ski hill would be detrimental to Edmontonians, with its offering of programming and rentals at the lowest rates in the city and additional subsidized programs for youth.

“Skiing and snowboarding is typically a very elitist sport that is very expensive to participate in,” Sloan told CTV News Edmonton. “We are the most affordable ski area in the city currently.”

“(This) is a place where generations of Edmontonians have learned to ski and snowboard,” she added. “They (would) lose a gem in the heart of the city that’s easily accessible through public transit.”

CTV News Edmonton reached out to the city for comment.