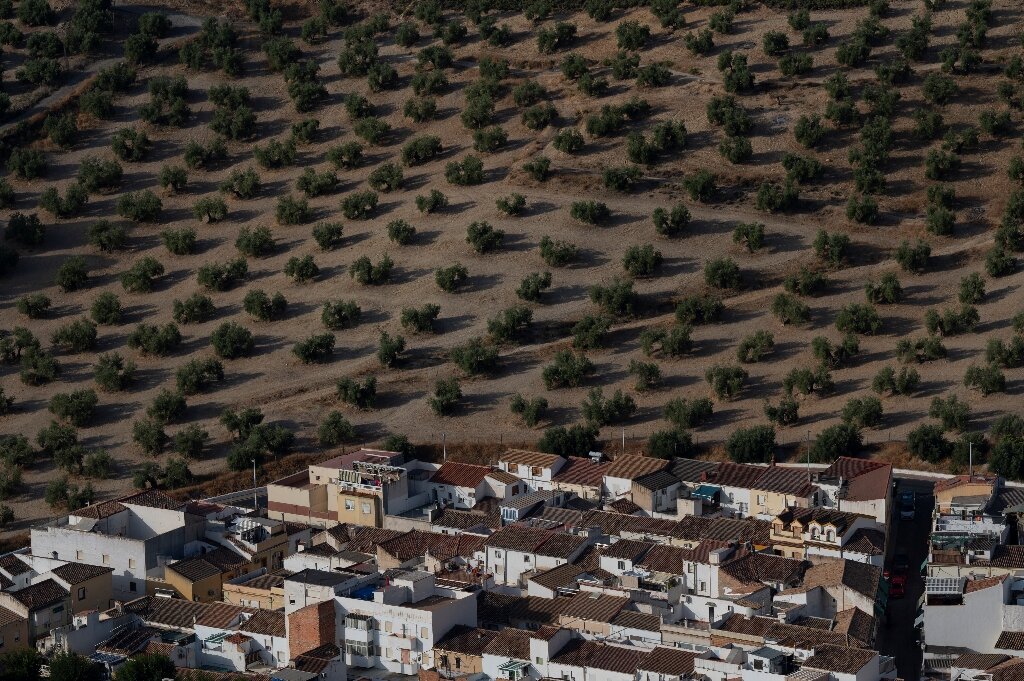 In the scorching heat, Felipe Elvira inspects the branches of his olive trees, planted as far as the eye can see on a dusty hillside in southern Spain.

“There are no olives on these. Everything is dry,” the 68-year-old said.

He and his son own a 100-hectare (250-acre) olive farm in the southern province of Jaen in sun-drenched Andalusia, a region which produces the bulk of the country’s olive oil.

But a severe drought gripping much of Spain threatens to shrivel their harvest this year.

“We are used to a lack of water, but not to this point,” said Elvira.

The region used to get 800 litres (210 gallons) of rainfall per square metre, but is set to get around half that amount this year, he said.

Global warming is hitting Spain harder than most European nations.

The country has suffered three intense heatwaves since May, damaging crops already grappling with an unusually dry winter.

But when droughts become extreme, the trees “activate mechanisms to protect themselves. They don’t die but no longer produce anything,” he added.

Hervas predicts the olive harvest from unirrigated land will come in at less than 20 percent of the average of the last five years.

The harvest from irrigated land will be just 50 to 60 percent of this average, he said.

But water reserves are dwindling.

The Guadalquivir river, which provides Andalusia with a large part of its water, is in “an absolutely dramatic situation” due to the lack of rain, said Rosario Jimenez, a hydrology professor at the University of Jaen.

Reservoirs fed by the river are at just 30 percent of their capacity, according to Spain’s ecological transition ministry.

“Some are even at 10 percent capacity—that is practically dried up,” said Jimenez.

“Not only does it rain less, but when it falls, it does so torrentially. The water flows without penetrating the earth,” said Hervas.

Parts of Portugal and Spain are the driest they have been in a thousand years due to an atmospheric high-pressure system driven by climate change, according to a study published this month in the journal Nature Geoscience.

The phenomenon is set to increase, jeopardising crops like olives and grapes.

At stake is a key export: Spain supplies nearly half of the world’s olive oil. Its exports of this “green gold” are worth some 3.6 billion euros ($3.7 billion) per year.

Olive oil has been an essential part of the Mediterranean diet for thousands of years and olive trees cover many hillsides in southern Spain, which are often unsuitable for other crops.

“Many villages here depend entirely on olive trees. Without olives, there is no more revenue,” said Hervas.

Seven out of 10 hectares of olive farmland in Spain are not irrigated, according to the COAG farmers’ union.

With the rise in temperatures, 80 percent of Andalusia’s unirrigated olive tree plantations may no longer be suitable to grow olives, or at least some varieties of the crop, it added.

The quality could also decline because farmers will have to pick the fruit early, before it is fully mature, the union said in a recent report.

Some farmers may be tempted to start irrigating their plots, but this would deplete stretched reservoirs even further.

“Not all land can be irrigated,” she said.

Back at his farm, Elvira is all too aware of the problem.

“We can’t exhaust resources, everyone needs water. Honestly, I don’t know how we are going to manage,” he said.

How to check a Chromebook’s specs, CPU usage, and more

Vince Gill performs tribute to Amy Grant after her bike…

‘Splatoon 3’ Direct announced by Nintendo for…