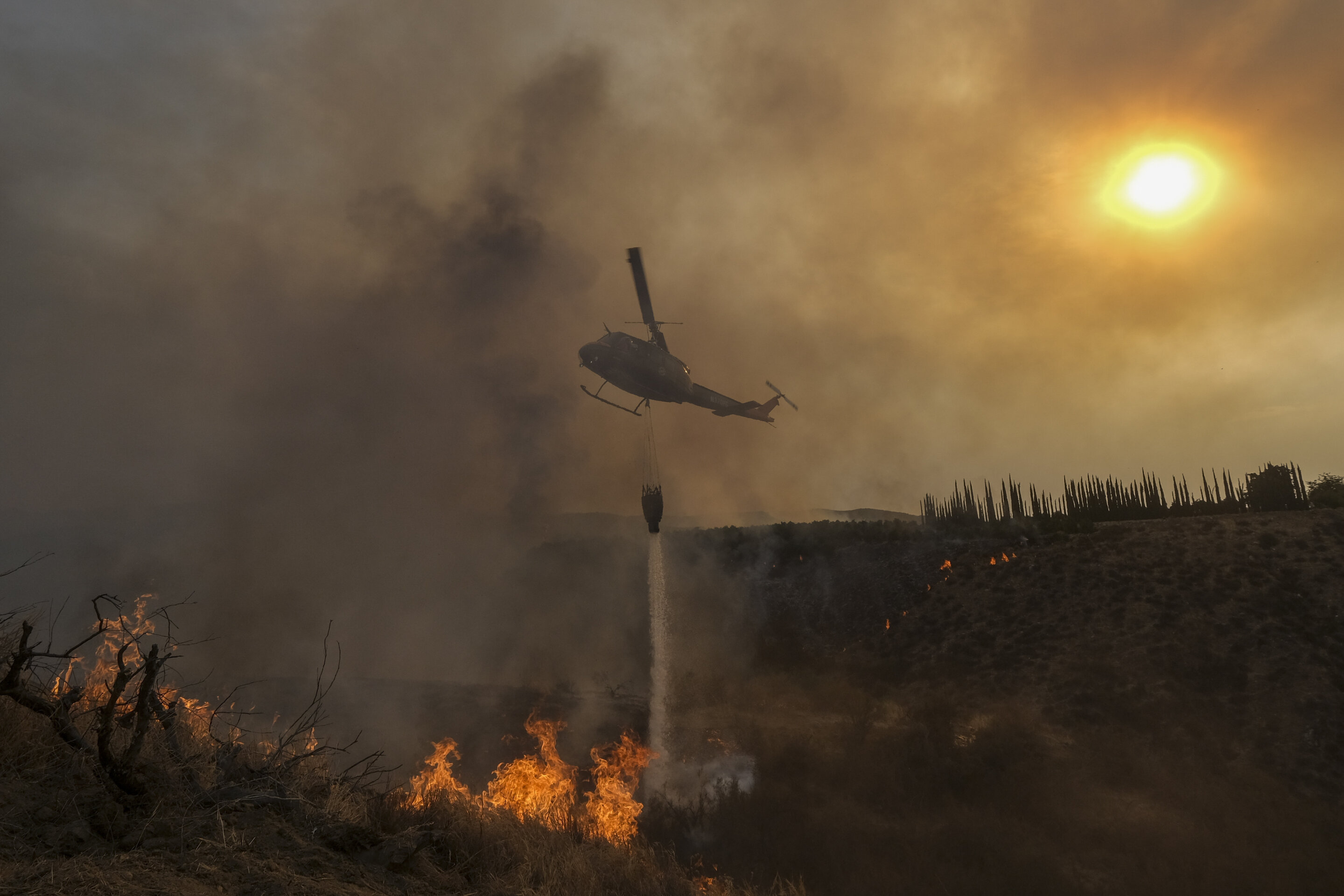 Californians sweated it out amid a record-breaking heat wave entering its 10th day Friday that has helped fuel deadly wildfires and pushed energy supplies to the brink of daily power outages.

Relief is in sight as the remnants of a hurricane approach that will lower temperatures during the weekend but could bring another set of challenges: heavy rains that will be welcomed in the drought-plagued state but might cause flash floods.

Climate change is making the planet warmer, scientists say, and weather-related disasters more extreme. The heat that colored weather maps dark red for more than a week in California is only a preview of coming attractions.

“We’ll see these heat waves continue to get hotter and hotter, longer and longer, more wildfire-plagued,” said Jonathan Overpeck, dean of the University of Michigan School for Environment and Sustainability.

California is just the latest casualty in a year of sometimes deadly heat waves that began in Pakistan and India this spring and swept across parts of the Northern Hemisphere, including China, Europe and others areas of the U.S.

Climate change also has exacerbated droughts, dried up rivers, made wildfires more intense and—conversely—led to massive flooding around the globe as moisture evaporating from land and water is held in the atmosphere and then redeposited by intense rains.

Scientists are reluctant to attribute any specific weather event to global warming, but say heat waves are exactly the type of changes that will become more common.

The so-called heat dome that cooked California was stuck in place by an exceptional high pressure region over Greenland, of all places, that essentially created a meteorological traffic jam, said Paul Ullrich, a professor of regional climate modeling at the University of California, Davis. That prevented the high-pressure system that was forcing hot air over California from moving along.

Temperatures hit an all-time high in Sacramento of 116 degrees (46.7 C) on Tuesday. Many other locations hit record highs for September and even more set daily high marks.

In the 1970s, Sacramento, the state capital, had five “extreme heat” days per year, Ullrich said. Today, it has about 10 and that will double again by the middle of the century.

“That’s pretty much going to be the story for much of the Central Valley and much of Southern California,” Ullrich said. “This kind of exponential growth in the number of extreme heat days. If you tie those all together, then you end up with heat waves like we’ve experienced.”

For nine days through Thursday, the vast energy network that includes power plants, solar farms and a web of transmission lines strained under record-setting demand driven by air conditioners.

“If we’re going to build a statue to anybody in the West, it will be a Willis Carrier,” said Bill Patzert, retired climatologist at NASA’s Jet Propulsion Laboratory, about the inventor of the air conditioner. “Really large areas of Southern California would essentially be unlivable without air conditioning.”

Air conditioning puts the biggest strain on power sources during a heat wave and operators of the electrical grid called for conservation and warned of the threat of power outages as usage hit an all-time high Tuesday, surpassing a record set in 2006.

The state may have averted a repeat of rolling outages two summers ago by sending a first-ever text alert that blared on 27 million phones urging Californians to “take action” and turn off nonessential power. Enough turned up thermostats, turned off lights or pulled the plug on appliances to avoid power cuts, though thousands of customers did lose power at various times for other reasons.

The West is in the throes of a 23-year megadrought that has nearly drained reservoirs and put water supplies in jeopardy. That, in turn, led to a sharp decrease in hydropower that California relies on when power is in peak demand.

“Part of the country that’s getting hit worst is the Southwest and Western United States,” Overpeck said. “It is a global poster child for the climate crisis. And this year, this summer, it’s really the Northern Hemisphere has been just an unusually hot and wildfire plagued hemisphere.”

The extreme heat helped fuel deadly wildfires at both ends of the state as flames fed on grass, brush and timber already “preconditioned to burn” by drought and then pushed over the edge by the heatwave, Overpeck said.

Firefighters struggled to control major wildfires in Southern California and the Sierra Nevada that exploded in growth, forced thousands to evacuate and produced smoke that could interfere with solar power and further hamper electricity supplies.

Two people were killed in the fire that erupted last Friday in the Northern California community of Weed at the base of Mount Shasta. Two others died trying to flee in their car from a fire in Riverside County that was threatening 18,000 homes.

What remains of Hurricane Kay, now downgraded to a tropical storm, is expected to bring heavy rains and even flash floods to Southern California from Friday night through Saturday. Strong winds could initially make it difficult and dangerous for firefighters trying to corral blazes, Patzert said.

Heavy downpours could also unleash mudslides on mountainsides charred by recent fires. While several inches of rain could fall, much of it will run off the arid landscape and will not make a dent in the drought.

“It comes at you like a firehose and you’re trying to fill your champagne glass,” Patzert said. “Everybody’s sort of excited, but on Saturday night a lot of people will be saying, ‘Yeah, we could have done without that.'”

iPhone 14 pricing remains the same in the US, sees rise in Europe and other regions