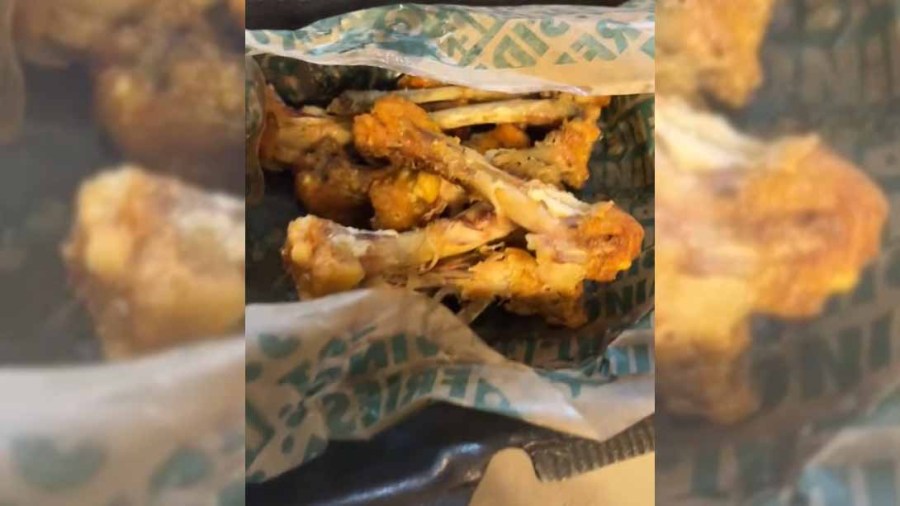 (NEXSTAR) – A Wingstop customer in California claims his DoorDash driver ate all the food he ordered and delivered a bag containing the discarded chicken bones — along with a note of apology, of sorts.

Damien ‘Suede’ Sanders, who goes by Funny Mane Suede on social media, first chronicled the strange story on TikTok in mid-August. In the video, he tells his followers he just ordered Wingstop, only to find his wings and fries had already been eaten.

“My anticipation is the real victim here,” Sanders joked to Nexstar.

As seen in his TikTok video, Sanders opened up his delivery order to find an empty fry container, a box containing the discarded chicken bones, and a note — allegedly from the DoorDash driver — providing an explanation.

“I’m sorry I 8 cho food,” the delivery driver wrote in the note, according to Sanders. “I’m broke n hungry. Consider it like ur payin it 4ward. I’m quitting this lame a– job n e way. B blessed.”

The note was also signed: “Your Door Dash guy.”

The video has since been viewed hundreds of thousands of times since Sanders uploaded it to TikTok on Aug. 17. But the incident is still eating away at him, at least a little.

“Do you know what it feels like to have your taste buds throwing a party for lemon pepper [wings], only to be disappointed by a pile of bone marrow?” Sanders said.

Sanders added that he also felt the driver ate the wings “disrespectfully,” seeing as he appeared to leave meat on the contaminated bones — an act he described as a “travesty.”

“I … grabbed my iPhone to show my TikTok family,” Sanders said. “This was so unbelievable to me that I knew the fam wouldn’t be able to digest this either.”


What happens when a restaurant goes tip-free?

Sanders confirmed to Nexstar that he soon called DoorDash and received a refund — along with a credit — after informing them of his chicken-less wings. A representative for DoorDash did not respond to a request for further information on the status of the delivery driver, but confirmed to Nexstar the company is “looking into” the incident.

Sanders, meanwhile, harbored no grudge against Wingstop, and even offered to be a commercial spokesperson in a new TikTok video shared this week.

“The whole family [is] eating it,” he said in the video, which showed several people seated around a table eating Wingstop. “I need some kind of sponsorship … I need to be on somebody’s commercial [or] advertisement. Wingstop marketing team, holler at me.”

He noted, however, that he didn’t opt for delivery this time around.

“I took everybody’s advice this time, went and picked up my own chicken so I don’t get a pile of bones,” Sanders said, glaring into the camera.

Wingstop, meanwhile, is planning a special delivery for Sanders and his family. “It’s important to Wingstop that we provide the best possible flavor experience,” a representative told Nexstar.

This isn’t the first time a DoorDash driver has been accused of consuming a customer’s order. In March 2019, a family in Stockton, California, captured video of a DoorDash driver taking a sip from the milkshake they ordered for their teenage son before ringing the doorbell.

“We sincerely regret that this incident fell short of the experience we strive to give our customers every day,” a spokesperson for DoorDash said at the time. “We reached out to this customer immediately after being notified of this event three weeks ago. We have since taken appropriate actions, including deactivating the dasher from our platform for failing to follow and maintain our standards of food safety.”