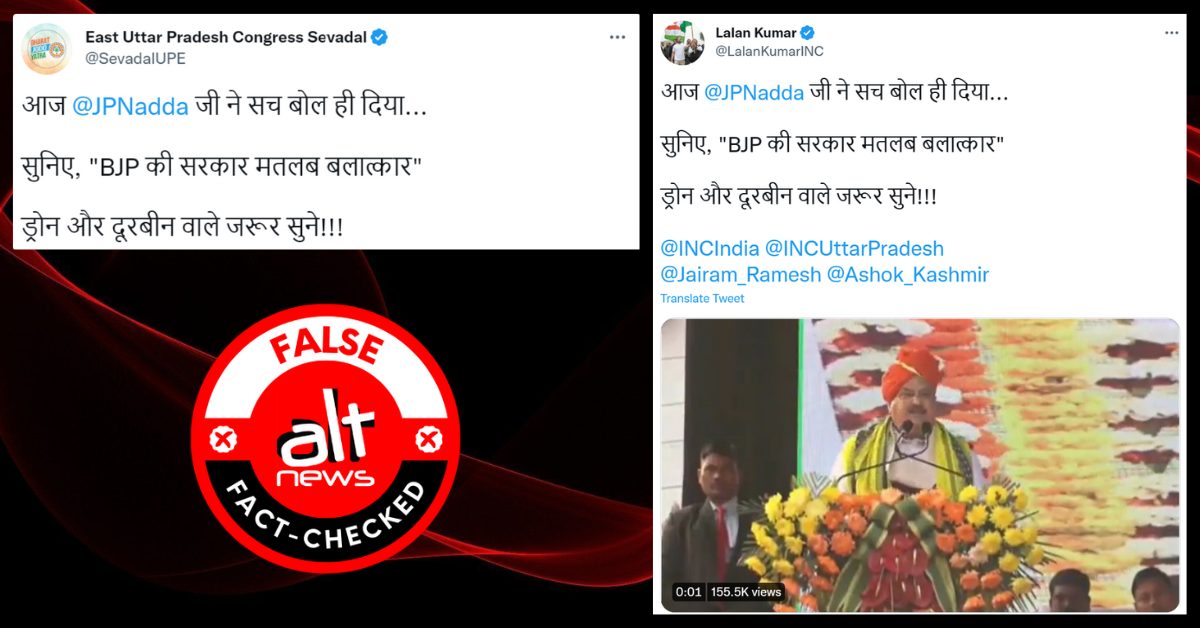 A three second clip of BJP national president JP Nadda giving a speech on stage is making the rounds on social media. It has been claimed that Nadda said that having a Bharatiya Janata Party (BJP) government was equivalent to being raped.

Congress leader Lalan Kumar amplified the claim by tweeting the video. He wrote, “Today @JPNadda admitted the truth after all.” Those holding drones and binoculars in particular should hear that a “BJP government means rape”. (Archived link)

Congress leader Alka Lamba quote-tweeted Kumar’s post and wrote, “Save our daughters from BJP leaders.” Apart from this, the Twitter handle of the East Uttar Pradesh Congress Seva Dal shared this video and amplified the same claim. (Archived link)

Congress national secretary Szarita Laitphlang also promoted the clip on Twitter, claiming that JP Nadda had a slip of the tongue, and termed the BJP a party of rapists. (Archived link)

We noticed that the BJP Uttar Pradesh Twitter handle replied to Lalan Kumar’s tweet containing the original video, and described the viral clip as shoddy editing. In this video, JP Nadda is heard saying, “If you want to think about the BJP, remind yourself of the days of the CPM government as well. Remember that, a CPM government means rape…” In other words, the viral video has been edited and two different parts have been juxtaposed to create the impression that JP Nadda likened the BJP government to rapists.

Alt News found a video of the full speech on the BJP’s official YouTube channel, in which the leader addressed a gathering in Tripura’s Agartala. Readers can hear the statement in question at the 29:06 mark. Here, Nadda takes aim at the CPM government and remarks, a “CPM government means rape….”

To sum it up, Congress leaders shared a doctored video of BJP President JP Nadda claiming that he compared the BJP government to rapists. He was actually referring to the CPM government while making the rather unsavoury remark.