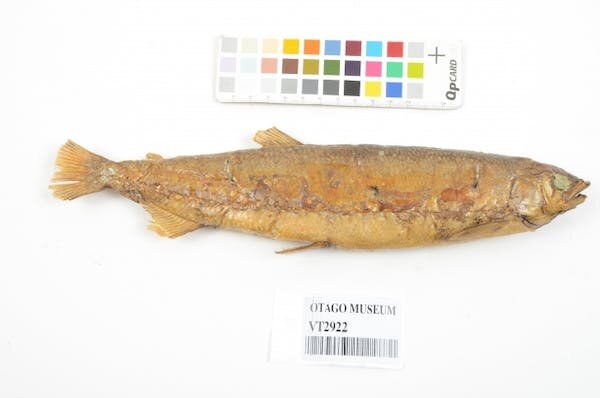 More than two decades later, the upokororo received full governmental protection, but it was too late. No further sightings were ever confirmed. In 1986, the upokororo was officially listed as extinct.

The upokororo disappeared so quickly that it’s mostly unknown to Western science. But almost a century after the last living upokororo was seen, we are now using ancient DNA to finally provide some answers.

Our research reveals the upokororo’s ancient origins, going back 15 to 23 million years, and a link to its Australian cousins.

From fertilizer to phantom

Historical accounts show the upokororo was once very common in rivers across the country. In the 1800s, cartloads were caught and traded for use as fertilizer and food.

But then it disappeared, likely as a result of a combination of factors—pollution, overfishing, disease and predation by introduced trout.

Despite its abundance in the past, only a small handful of preserved upokororo still exist in museums today. This is one reason we know so little about this curious fish.

A second reason is that many of these specimens have been treated with formaldehyde, a chemical that preserves the form of the fish but plays havoc with their DNA.

The DNA in specimens “fixed” with chemicals like formaldehyde gets broken up into small pieces and stuck together. Over time, the DNA becomes more and more damaged.

This is a big challenge for researchers who want to study species like the upokororo and a major reason why extinct fish are understudied compared to other extinct species.

Fortunately, new methods have recently been developed that help to isolate and analyze small damaged fragments of DNA. This means genetic analysis of many “wet preserved” specimens like those of the upokororo is now possible for the first time.

Such genetic information can provide new insights into the origin and identity of extinct species.

Based on the general appearance of the upokororo, scientists have usually considered it to be a close relative of the Australian grayling. The Australian grayling is part of a family of fish that includes Stokell’s smelt and the New Zealand smelt, which are both still found in rivers across Aotearoa.

New DNA data confirmed the Australian grayling is the closest living relative of the upokororo, but only a distant cousin at best. Genetic comparisons showed the common ancestor of the two species lived more than 15 million years ago.

An ancient origin for the upokororo agrees well with the discovery of fossil grayling ear bones in lake sediments from Saint Bathans in Central Otago.

Genetic and fossil data together suggest the ancestors of the upokororo arrived in Aotearoa following the birth of the Alpine Fault. Before that time, present-day Aotearoa was mostly beneath the ocean, during the height of the Oligocene “drowning” 27 to 22 million years ago.

While baby upokororo could live in salt water, adults needed brackish or fresh water. The emergence of Aotearoa from beneath the waves would have created new habitats for the upokororo.

Back from the brink?

Some scientists have previously put forward a controversial idea. Could the Australian grayling be released into rivers in New Zealand to fill the ecological gap left by the extinction of the upokororo?

That probably wouldn’t be a good plan. Millions of years of independent evolution mean the niches filled by the Australian grayling and upokororo were likely very different.

If we can’t replace the upokororo, is it possible that they’re still out there somewhere in a remote waterway, waiting to be re-discovered? It wouldn’t be unprecedented. Takahē were thought to be extinct before a small population was re-discovered in the Murchison Mountains in 1948.

Genetic data provide a new tool in the search for survivors. Environmental DNA in water samples from remote catchments can now be compared routinely to known DNA from the upokororo. Perhaps one day this will lead to a positive match that indicates the location of survivors.

Fish populations are in sharp decline globally. Lessons learned from past extinctions, like that of the upokororo, can help us preserve fish species for future generations. Hopefully we can heed the lessons from the past.