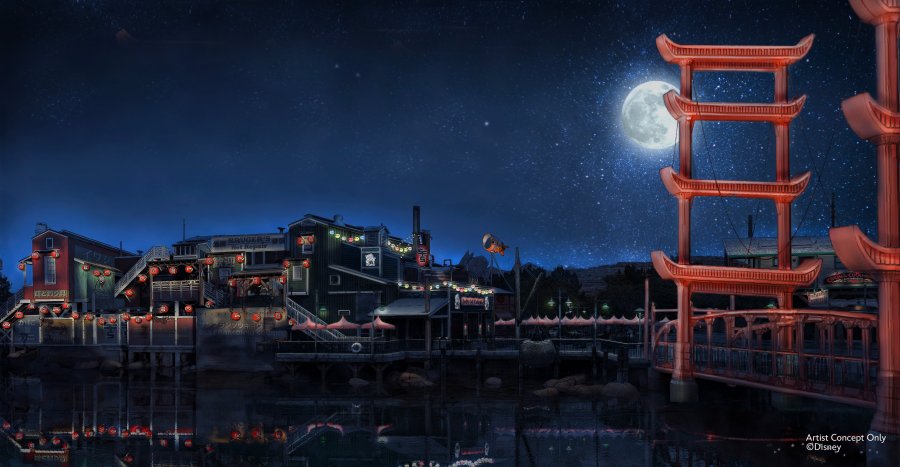 (KTLA) — An area of Disney California Adventure Park will have a new look as Disney continues to revamp and reimagine the “Happiest Place on Earth.”

On Sunday, the entertainment giant announced during its annual D23 Expo that California Adventure would be saying goodbye to Pacific Wharf and “reimagining” it with a newly designed area inspired by the “Big Hero 6” film and television franchise.

The waterfront restaurant hub inspired by San Francisco’s piers, Cannery Row and the fishing culture of the Central Coast and Northern California will soon transform into the fictional city of San Fransokyo.

The city serves as the backdrop of the “Big Hero 6” franchise and takes inspiration from its two namesakes: San Francisco and Tokyo.

The faux-dilapidated metal sidings that Pacific Wharf is known for will be revamped with bright Japanese lanterns and vibrant colors as Disney continues to find new ways to incorporate its many intellectual properties into its parks.

A promotional image shared by Disney showed the entrance to the area — right now styled as a functional fisherman’s bridge — will be redesigned with inspiration from Japanese architecture.

Pacific Wharf is home to the beloved sourdough bread Bakery Tour, which takes you through a working replica of the famous Boudin Bakery in San Francisco. The area also features various walkup restaurants with Asian and Mexican cuisine, a Ghirardelli ice cream shop, as well as the Pacific Wharf Café.

It’s unclear at this time if any of those restaurants will survive the remodel.

The movie premiered in 2014 and has since spawned two Disney-produced television series.

“Imagineers are in the early phases of this work, but you can see glimpses of what’s to come for children of all ages – the young and young at heart. There will be a place to meet Baymax, plus new spots to eat and shop,” Disney said.

During Disney’s annual D23 Expo, Disney executives and creatives announced several other additions to the park, including new character encounters in Star Wars: Galaxy’s Edge and at the Avengers Campus. Also coming to Avengers Campus at an unannounced time: a third big-ticket attraction to the land that takes riders face-to-face with “King Thanos.” The date for that attraction to open was not announced.

‘I do my job, I go the f**k home’: Young worker goes off in TikTok rant

For a complete list of changes and additions coming to Disneyland and Disney California Adventure, click here.

‘Hope Remains’ For a Sequel to ‘The Goonies,’ Says Sean Astin