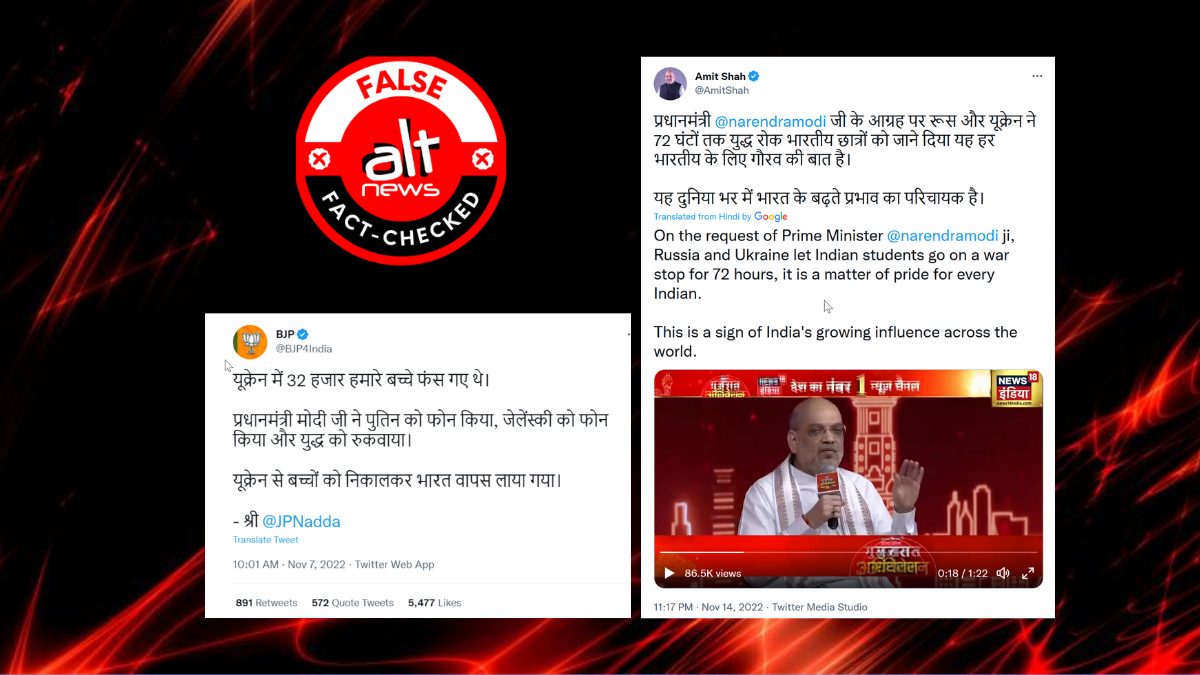 Recently, several prominent BJP leaders claimed that Prime Minister Narendra Modi had intervened to stop the war between Russia and Ukraine for some hours so that Indian students caught in the conflict could be evacuated and brought back to India.

In an interview with News18 Uttar Pradesh, Union home minister Amit Shah recently said that at the request of Prime Minister Narendra Modi, Russia and Ukraine agreed on a 72-hour ceasefire to facilitate the evacuation of Indian students. It is a matter of honour for every Indian and a testimony to the growing influence of India across the world, he added. He also made the point that he was following India’s diplomatic ties with other countries for a long time, but this was unprecedented.

Shah also tweeted a clip of the interview.

BJP4India, the official Twitter handle of the BJP, quoted Shah’s statement to the TV channel and repeated the claim.

While electioneering for the forthcoming Assembly elections in Himachal Pradesh, BJP national president JP Nadda, too, had made the same claim. While addressing a gathering at Kotkhai, he said that 32000 youth from India were stranded in Ukaraine in the Russia-Ukraine war. Prime Minister Narendra Modi, over phone calls, urged the Russian president Vladimir Putin and Ukranian president Volodymyr Zelensky for a ceasefire and then evacuated the India nationals.

The live stream of the speech is available on BJP’s official YouTube channel. Excerpts from his speech that mention the above statement starts at 20 minutes and 37 seconds of the video.

In a special briefing on Operation Ganga on March 3, 2022, ministry of external affairs spokesperson Arindam Bagchi categorically denied that Russia or Ukraine had stopped the bombing at the behest of India. The spokesperson added, “I am not sure I can reveal much. We did receive specific input on a few (safe) routes that were still accessible. These are the places Indian citizens could move to. We shared this information with our Indian nationals and I am glad that a lot of them could reach those places…It is a war zone, hence I cannot comment on the exact nature of the situation since I haven’t met them yet. But, I am glad a large number of people managed to safely travel out of the zone. However, it is wrong to speculate that bombings were ceased at those places where we were coordinating (safe passage of citizens).

This statement by the spokesperson of the ministry of external affairs can be seen from 21 minutes 18 seconds in the video below.

After numerous media organisations made the ‘ceasefire’ claim in March 2022, Alt News had published a fact-check report debunking it.

A plethora of media outlets and journalists, including Sudhir Chaudhary, claimed that Russia “stopped the war for 6 hours” at India’s behest. MEA clarified this is absolutely inaccurate.pic.twitter.com/Zbdd3wuqZd

In summary, BJP leaders falsely claimed that it was Prime Minister Narendra Modi’s phone calls to the heads of both the States that paused the Russia-Ukraine war facilitating evacuation of Indian nationals. This information has been debunked by the ministry of external affairs itself.