did humans hunt and eat woolly mammoths or dinosaurs? 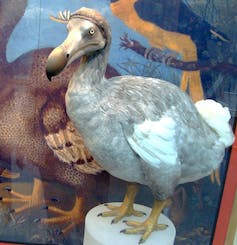 Thanks for this great question!

Humans can be blamed for a lot of things: chopping down rainforests, worsening climate change, and driving precious species like the Tasmanian Tiger to extinction. But can we add hunting and eating woolly mammoths and dinosaurs to the list?

Well, we can safely assume dinosaurs never fell prey to humans – mainly because the two never even met (despite what the Jurassic Park films suggest). Dinosaurs had already been extinct for about 62 million years by the time modern humans started roaming the planet!

But what about woolly mammoths? In this case, the movie Ice Age was actually correct. Humans and woolly mammoths lived side by side for at least 15,000 years.

Mammoth findings in the fossil record

So did humans hunt woolly mammoths to extinction? To answer this question we must look at clues in the fossil record, which is made up of the preserved remains of ancient life.

In the case of the dodo, a large flightless bird that went extinct, documents from 1690 make it clear that over-hunting by humans was the cause.

But woolly mammoths were around long before we had paper to write on. They existed from about 300,000 years ago – a time when ice covered the northern parts of the world.

As for when they went extinct, a small number of dwarf mammmoths survived on a little isolated island in the Arctic until about 4,000 years ago. But the full-sized species disappeared from an area called Beringia (located between Siberia and Alaska) some 12,000 years ago – after living alongside humans for at least 15,000 years.

Did humans kill them off?

When early humans hunted, they tended to kill many animals at the same time. This created “kill sites”, which are literally huge piles of animal bones. And when they pulled the meat off the bones to eat, they used stone tools that created cut marks or small notches in the bones.

These marks now provide vital clues. In Beringia, there is fossil evidence for mammoth kill sites, and cut marks on mammoth bones – so all the clues point to humans having hunted woolly mammoths.

But the strongest evidence was found in southern Poland in 2019. A small part of a stone tool, made into a spear blade by a human, was found in the rib bone of a woolly mammoth. If this was evidence presented in a murder trial, that human would be locked up straight away!

Even so, does that mean humans alone were responsible for wiping out all the full-sized woolly mammoths?

Some scientists suggest the climate also played a role.

It could be that climate conditions at the time shifted away from what woolly mammoths preferred and caused a large drop in their numbers.
This may have made the remaining mammoths more vulnerable to increasing hunting as the human population grew.

Australia didn’t have woolly mammoths. They would have gotten very hot in those thick coats! But we did have giant animals known as megafauna, which went extinct between 5,000 and 17,000 years (depending on the species) after the First Peoples arrived.

Interestingly, we don’t find any reliable fossil evidence of these people hunting Australia’s ancient megafauna. There are no known kill sites, no cut marks on the animal bones, and no evidence of spear blades being lodged in ribs.

Was the megafauna’s disappearance related to human activity? Or did climate change play a part here as well?

The jury is still out on this one! But the more fossils we find, and the better we get at studying them, the closer we’ll come to understanding what happened all those years ago.

Read more:
Curious Kids: could dinosaurs evolve back into existence?