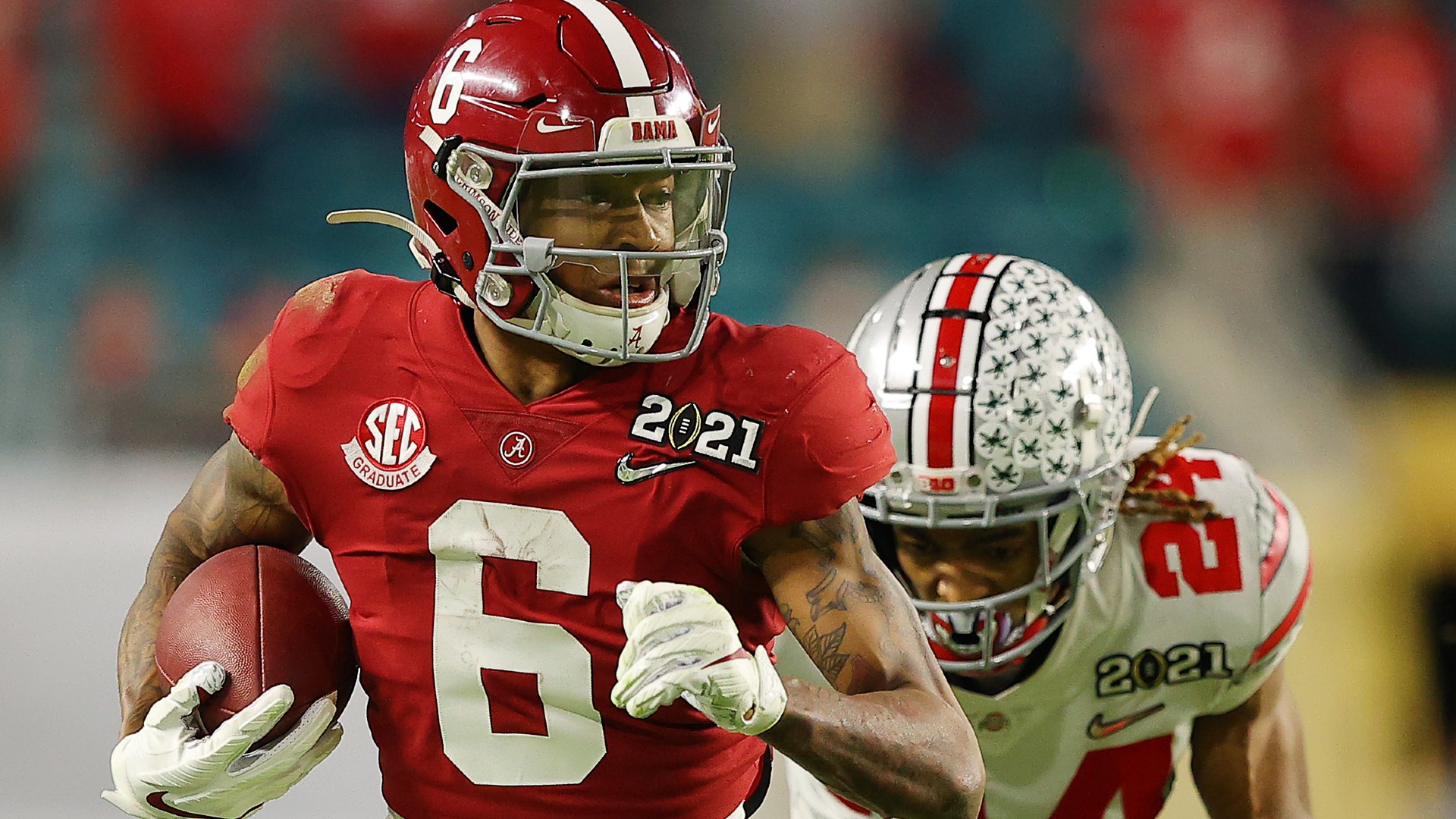 After Smith helped the Crimson Tide roll with 12 catches for 215 yards and three touchdowns, all in the first half of that game, there’s a better chance of him going in the top five.

Smith has been the consensus No. 2 wideout prospect for a while, jumping teammate Jaylen Waddle. Now, the question is whether Smith has usurped LSU’s Ja’Marr Chase — who opted out of the 2020 college football season after his team’s national championship run a year ago — as the best receiver on the board.

Knowing that potential and knowing the draft order through No. 24 overall, here’s looking at where Smith (6-1, 175 pounds) is most likely to end up as a dynamic NFL rookie:

The Jaguars will be locking into Clemson quarterback Trevor Lawrence at the top. The Jets have been strongly attached to Ohio State’s Justin Fields at No. 2, but there’s also talk of them considering a tackle or another offensive position, sticking with Sam Darnold and giving him bigger help for whoever replaces Adam Gase as head coach.

Fields went off against Clemson in the CFP semifinal to solidify his stock, but watching Smith dominate on the same field as Fields might make the Jets deviate from QB and OT, knowing the team did take Mekhi Becton for the latter position in the 2020 first round. The Jets also drafted Denzel Mims last season, but Breshad Perriman is a free agent after his first, injury-riddled season in New York. Pairing Smith with Mims, with Jamison Crowder in the slot, can’t be ruled out as that could be the massive boost Darnold needs.

The Dolphins have this pick courtesy of the Texans, thanks to their trade of Pro Bowl tackle Laremy Tunsil. Assuming they don’t use it as part of a rumored blockbuster trade for the Texans’ Deshaun Watson and part ways with Tua Tagovailoa, too, they should consider getting a playmaker for Tagovailoa who can be a great complement to DeVante Parker.

Chase has been a popular pick for them because of his versatility, where he can play between Parker and the promising but oft-injured Preston Williams. With Chan Gailey gone as offensive coordinator, the Dolphins should turn to someone who makes better use of true 11 personnel for Tagovailoa (three wide receivers). So it would make sense for them to think about reuniting Smith with Tagovailoa.

The Falcons, who pick fourth, have two special former Alabama wide receivers in Julio Jones and Calvin Ridley. As tempting as it would be to add a third to help Matt Ryan, that team needs to think defense first for its new coach.

As for the Bengals, the thinking has been to upgrade pass protection for second-year franchise QB Joe Burrow with Oregon tackle Penei Sewell, should he still be available. But with A.J. Green unsigned for his Age 33 season, it also would make sense to put Smith opposite second-year second-rounder Tee Higgins, with Tyler Boyd still operating with them in the slot. Smith’s speed and quickness would play well off Higgins’ size all over the field.

The Eagles are a big wild card in the draft, now that offensive-minded head coach Doug Pederson has been fired on the heels of defensive coordinator Jim Schwartz deciding not to return. They need some key help on both sides of the ball, and Penn State linebacker Micah Parsons is a good mesh of talent and need here.

But after taking speedy Jalen Reagor in the first round last year, it wouldn’t be shocking if they go after a second playmaker for the outside and clean up a mess of fading, hurting veterans (Alshon Jeffery, DeSean Jackson) and some disappointing youth (J.J Arcega-Whiteside). Reagor, fully replacing Jackson as the “Z” and Smith taking over “X” would be a nice combination, especially if the latter is reunited with Jalen Hurts, while keeping Greg Ward as the choice “Y” for the slot.

This is where Smith is going in SN’s latest mock with Marvin Jones Jr. heading into free agency as he turns 32 for next season. Jones had a strong year as the needed No. 1 with Kenny Golladay shelved for most of it with a hip injury. Whether it’s more Matthew Stafford or a new QB with a new coach, the Lions should see how Smith would work well off Golladay. There’s also a chance the Lions don’t re-sign Golladay, leaving a big void at wideout and making a selection of either Smith or Chase an absolute must.

Meanwhile, behind them all, the Giants have every reason to get aggressive to get a top-flight wideout for Daniel Jones in Year 3. They would be candidates for a big free-agent signing such as Golladay if he makes it to the open market. But if not, Dave Gettleman should think about jumping up a few spots to grab Smith. Sterling Shepard is a strong No. 2, but Darius Slayton doesn’t profile as an all-around No. 1. Smith can start outside as the “X,” with Slayton as the deep threat “Z” and Shepard moving into the slot to replace strong cut candidate Golden Tate.

The Lizzie Borden Murder House Is On The Market