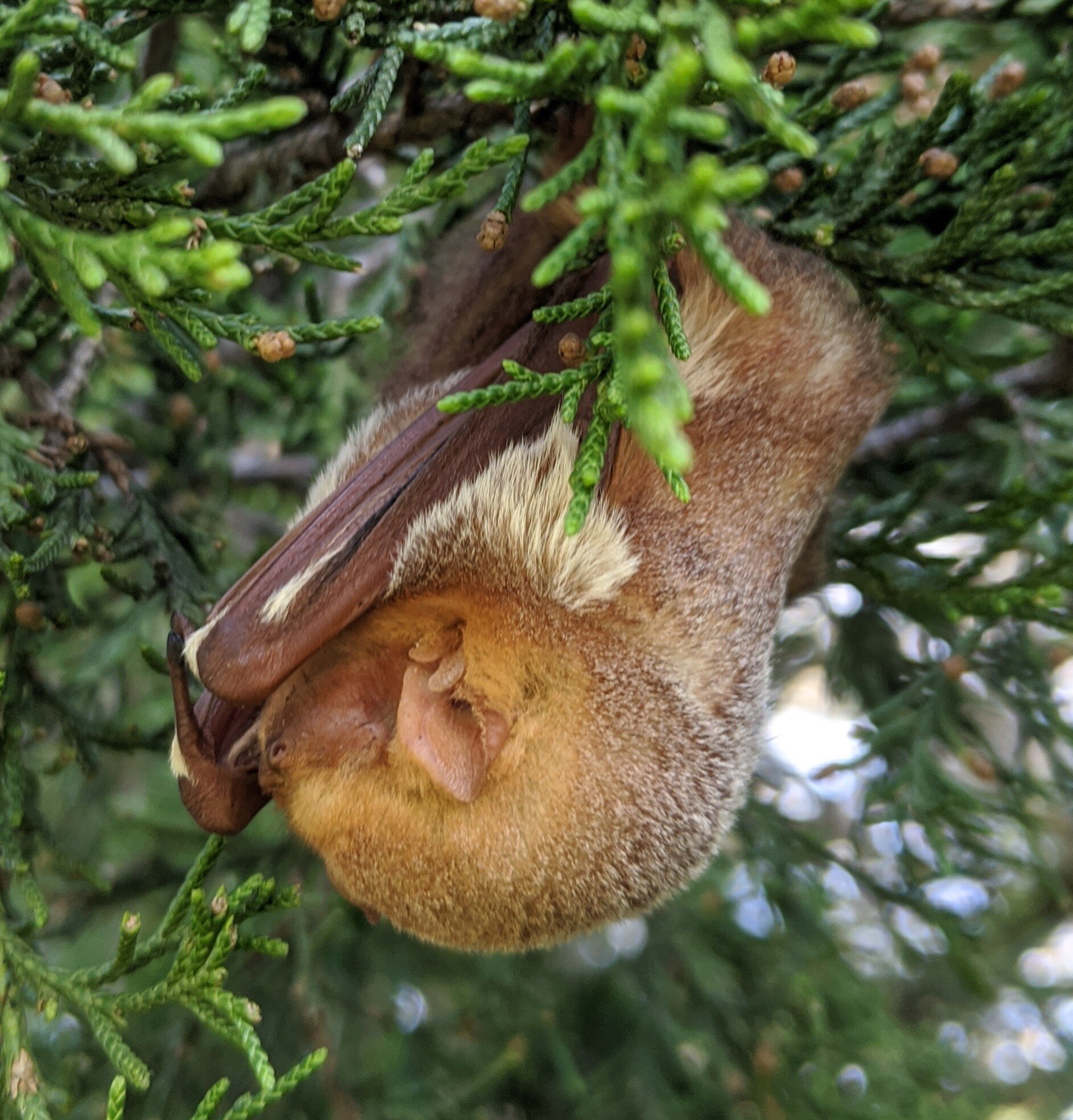 Forest managers cut down trees, but their ultimate goal is to keep forests healthy and growing. Bats might help with that, according to recent University of Illinois research, thanks to their appetite for bugs that could otherwise destroy tree seedlings.

In another new U of I study, researchers detail the roosting and foraging habits of the Eastern red bat, an important predator that could have outsized impacts on tree regeneration in managed forests.

“With white nose syndrome causing major declines in many bat species, the Eastern red bat has become the most commonly detected bat in many Midwestern forests, making up 70 to 80% of the captures in our Indiana study site. So from that perspective, they probably have the most sizeable effect on the forest. To manage the landscape holistically, we should consider species that might have a disproportionate impact,” says Elizabeth Beilke, postdoctoral researcher in the Department of Natural Resources and Environmental Sciences (NRES) at U of I and lead author on the study.

“Red bats are selecting and using parts of the forest that are associated with forest management, including recent timber harvests and maintained forest openings. They’re also using ponds, roads, and ridges more than we’d expect based on availability. Our data suggest these bats can coexist with forest management,” Beilke says.

“This is heartening because timber harvest isn’t going away; it’s a human need. But this work demonstrates that management practices like timber harvest aren’t inherently harmful to bats and could even benefit certain species.”

Of the landscape elements they used, ponds were among the most important determinant of red bats’ foraging and roosting behavior. For that reason, Beilke says forest managers should consider provisioning bats with water, especially as the climate continues to change.

The results are similar to O’Keefe’s previous findings for endangered Indiana bats and threatened northern long-eared bats in the HEE site. Those bats preferentially foraged and roosted near thinned areas, small patch cuts, and ponds.

“It seems like the more recent practice of harvesting smaller sections of the forest is a better approach, not only for regenerating oaks and hickories, but also for these bats. That’s opposed to large clear cuts, where we take out a lot of the forest at once. Oaks and hickories also respond well to shelterwood harvests, which offer shade to tiny tree seedlings during hot, dry summers. These partially shaded forest patches are the kinds of places bats prefer, as well,” O’Keefe says.

The researchers attached tiny radio transmitters to as many red bats as they could capture for each of three years: 26 in all, both male and female. Then they staked out spots atop ridges to pick up the bats’ signals every five minutes for several nights. The method, known as radio telemetry, allowed researchers to pinpoint the movement, home range, and landscape preferences of each individual.

O’Keefe says it’s an improvement over acoustic methods, where researchers listen for bat calls. With acoustics, researchers can’t distinguish individual bats, potentially missing important differences due to sex, age, health, and other factors. Interestingly, in this case, sex wasn’t much of a factor despite females having higher energetic costs related to milk production and carrying developing pups.

Analyzing the bats’ movements gave the researchers even more insights into the species. For example, red bats foraged over a relatively small area, about 81 hectares or 200 acres. For comparison, the endangered Indiana bat foraged over 343 hectares [847 acres] in the same landscape.

“With a home range that small, Eastern reds are kind of the couch potato of bats,” Beilke says. “Because they’re capable of long-distance flights, we were surprised to find their nightly home ranges were much smaller than the areas used by smaller bat species.”

When the researchers tagged bats with radio transmitters each year, they noticed a repeat guest in the study. They not only recaptured a female red bat at the same site for two years running, but she frequented the same spots in the forest in both years.

O’Keefe says, “I think that’s a testament to the forest. It must be good quality habitat for bats to migrate to winter sites and to come back.”

Although red bats are becoming the most common bat species in the HEE site and they’re less susceptible to white nose syndrome due to their solitary roosting habits, the species is far from bulletproof.

“Unfortunately, Eastern red bats die in huge numbers at wind turbines and a few recent papers have suggested they are declining range-wide. This is a shame because they’re very different from other bat species in this region. They roost solitarily in foliage, exposed to the elements, and give birth to three to four pups at once. Plus, they’re devastatingly cute,” Beilke says.

The study, “Foliage-roosting Eastern red bats select for features associated with management in a central hardwood forest,” is published in Forest Ecology and Management.

Provided by
University of Illinois at Urbana-Champaign