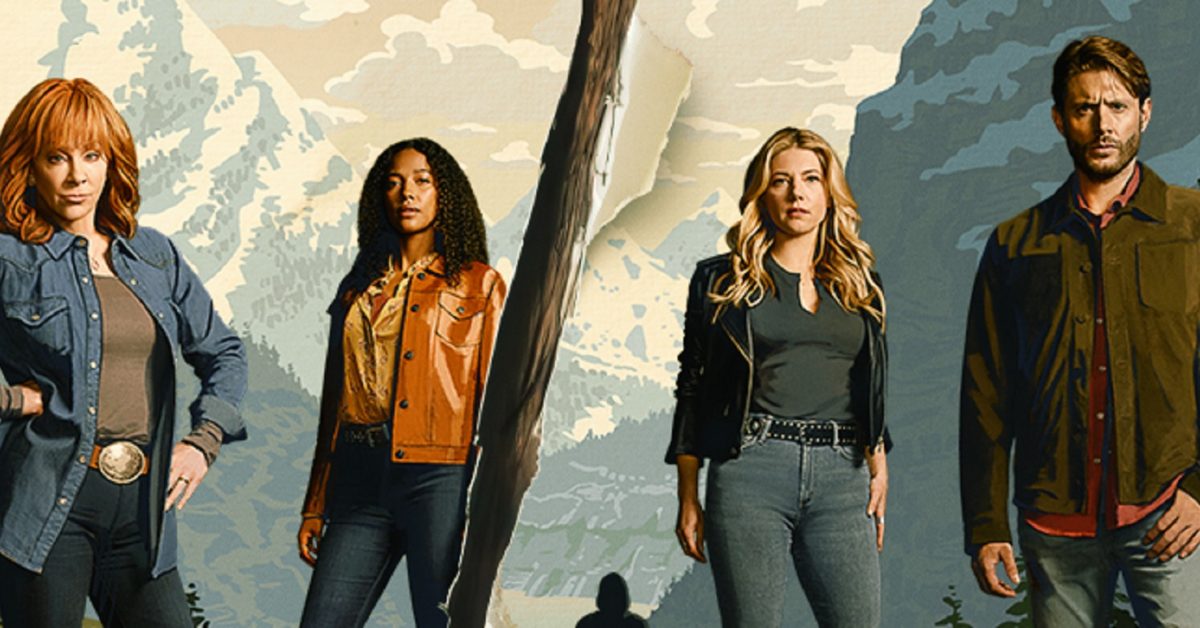 When ABC’s Big Sky: Deadly Trails kicks off later this month, Cassie (Kylie Bunbury), Jenny (Katheryn Winnick), and newly-appointed Sheriff Beau Arlen (Jensen Ackles) will have been maintaining peace & order in Helena, Montana. Did you really think it was going to last? When a local backcountry trip goes awry, the trio faces their most formidable mystery yet as they find themselves entering the world of Sunny Day Excursions boss Sunny Barnes/Sunny Brick (Reba McEntire). And as “sunny” as she might be on the outside, there are some pretty dark clouds inside of Sunny… especially when it comes to protecting her family. Along with a new key art poster highlighting the four, showrunner Elwood Reid offered some additional clues to what viewers can expect during an interview with EW for its fall preview issue.

“She’s a mama bear that you don’t cross,” Reid teased about McEntire’s big bad. “What’s going to be fun is seeing how far she’ll go to defend her family. She’s got a bit of an edge and some darkness to her. But if you squint, you can justify some of the stuff she’s going to be doing.” Outside of that, viewers can also expect more one-and-done, single-episode cases for Jenny and Beau. But for those of you seeing some sparks between the two already? For the sake of Ackles’ long-term future on the series, here’s hoping Jenny and Beau just remain friends. “One thing you have to be careful with on ‘Big Sky’ is the minute somebody gets close, they end up getting killed. The actors get very nervous like, ‘If we fall in love and we start having an affair, are you going to kill us off?'” It’s always a risk in big-sky country,” Reid added.

Now here’s a look back at Barnes putting on the best face possible in a previously-released teaser… but beneath the surface? That’s another question…

And here’s a look at the previous teaser for ABC’s Big Sky: Deadly Trails, set to premiere on September 21st:

Based on the books by C.J. Box, ABC‘s Big Sky is executive produced by Kelley, Ross Fineman, Matthew Gross, Paul McGuigan & Box and is produced by A+E Studios in association with 20th Century Fox Television. A+E Studios is the studio unit of global media company A+E Networks, LLC. 20th Century Fox Television is a part of Disney Television Studios, alongside ABC Studios and Fox 21 Television Studios. Production on the second season of Big Sky moved to Rio Rancho, NM, from Vancouver. Elwood Reid serves as showrunner and executive-produces alongside Kelley.

Cyberpunk 2077 mods are getting official with CDPR’s REDMod tools