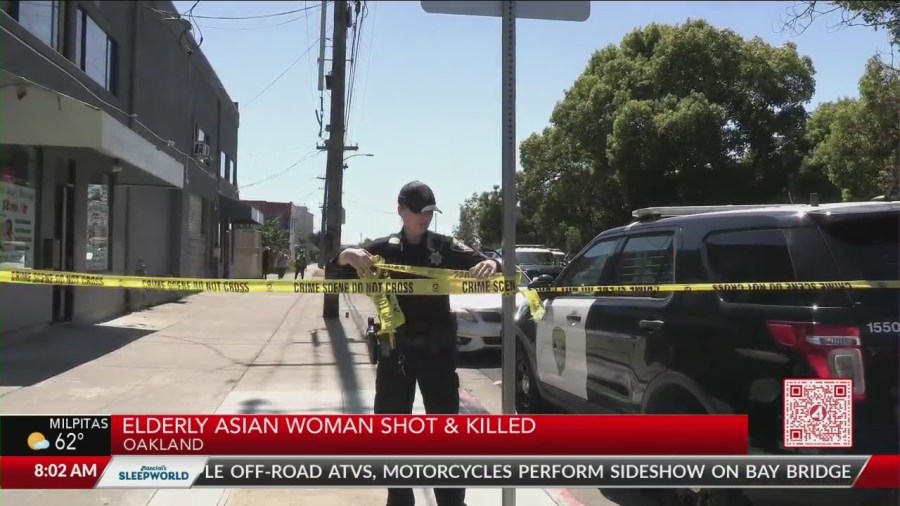 OAKLAND, Calif. (KRON) — Oakland City Council President Nikki Fortunato Bas says she was outraged and sickened after learning an elderly Asian woman was brutally killed in broad daylight on Sunday, and is now calling for justice to be served.

The shooting happened in the Little Saigon neighborhood, right near Lake Merritt near 5th Avenue and East 11th Street. Police are investigating the deadly shooting that happened just after 2 p.m. Sunday.

Bas says someone tried to rob the woman and then shot and killed her. Oakland police are still looking for the shooter. Bas says those who commit violent crimes must be held accountable.

The city council president put out a statement saying in part:

“What does it say about our community when we cannot walk down our own street, visit a neighbor, or enjoy a picnic on the lake on a Sunday afternoon? We can and must do better.”

This is the second deadly shooting to happen in one month in the Little Saigon neighborhood. An Asian Uber driver, Kon Woo Fung, was also killed during an attempted robbery. Two people have been arrested in relation to that incident.

After that shooting, the police chief said the department would put more resources in the area. Now, another member of the AAPI community has been killed.

The city council president says she is sending love and support to the family of the victim from yesterday’s shooting.

Oakland Councilmember Loren Taylor also put out a statement in regard to the attack, tweeting, “An attack on one of us is an attack on all of us. We will bring justice to the victim and her family and ensure everyone understands that this activity will not be tolerated in Oakland.”

KRON4 reached out to the Oakland Police but has yet to hear back.

Cineworld risks bankruptcy. Why it’s a ‘warning’ for other cinemas – National