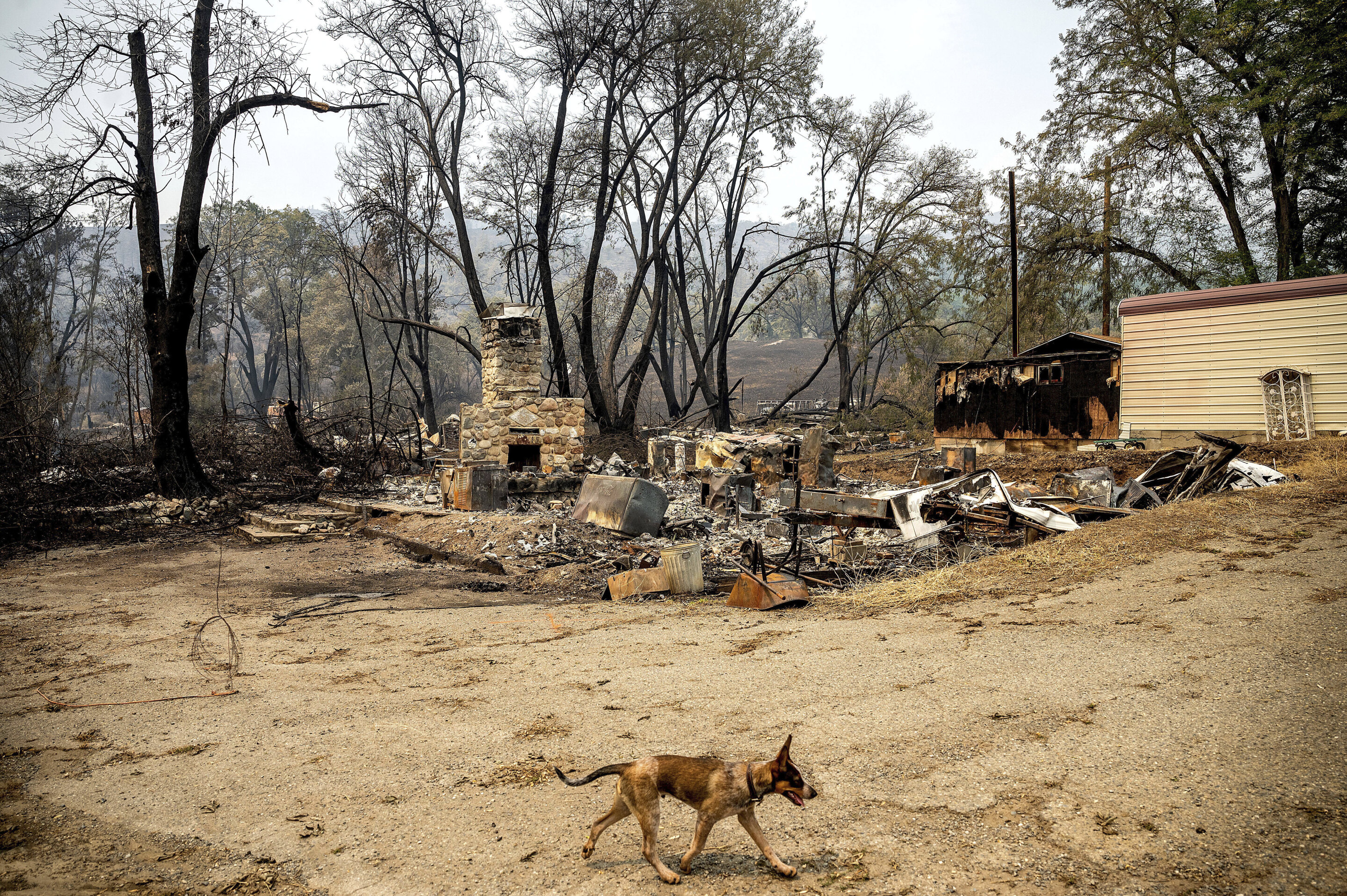 Roger Derry, 80, and his son have lived together in the tiny scenic hamlet of Klamath River in Northern California for more than 40 years.

They know most of the town’s 200 or so residents.

Now, they’re one of the few families left after California’s largest and deadliest wildfire of the year raged through the modest homes and stores of the riverside town.

“It’s very sad. It’s very disheartening,” Derry said. “Some of our oldest homes, 100-year-old homes, are gone. It’s a small community. Good people, good folks, for the most part, live here and in time will rebuild. But it’s going to take some time now.”

The McKinney Fire that erupted last Friday remained out of control, despite some progress as firefighters took advantage of thunderstorms that dumped rain that temporarily took a bit of heat out of the parched, scorched region not far from the Oregon border.

The area saw another thunderstorm Tuesday that dumped heavy rain and swelled rivers.

The fire has burned nearly 90 square miles (233 square kilometers), and is the largest of several wildfires burning in the Klamath National Forest.

The blaze grew very little Tuesday, and fire officials said crews were able to use bulldozers to carve firebreaks along a ridge to protect homes and buildings in and around the small city of Yreka.

But several thousand people remained under evacuation orders, 100 buildings ranging from homes to greenhouses have burned and at least four bodies have been found in the region.

The destruction of a small community has sadly become a real possibility as wildfires become fiercer in the Western United States.

Wildfires in Montana, Idaho and Nebraska have destroyed some homes and continue to threaten communities.

Scientists have said climate change has made the West warmer and drier over the last three decades and will continue to make weather more extreme and wildfires more frequent and destructive.

When it began, the McKinney Fire was only a couple hundred acres and firefighters thought they would quickly have it under control. But then, a thunderstorm cell came in with ferocious wind gusts that within hours had pushed it into an unstoppable conflagration.

Roger Derry and his son, whose name is spelled Rodger Derry, decided not to evacuate when the fire broke out and said their home, which they’d tried to safeguard by trimming away nearby bushes, survived. Firefighters also showed up and dug firebreaks around the neighborhood.

But they could see the fire as it tore its way through the places around them.

“When that fire came over that ridgeline, it had 100-foot flames for about 5 miles and the wind was blowing. It was coming down like a solid blowtorch,” Roger Derry said. “There was nothing to stop it,”

The fire destroyed most of the homes, including those in a trailer park, along with the post office, community hall and other scattered businesses.

The cause hasn’t been determined.

In northwestern Montana, a fire that started Friday near the town of Elmo on the Flathead Indian Reservation has burned some structures, but authorities said they didn’t immediately know if any were homes. The blaze measured 25 square miles (66 square kilometers) on Tuesday, with 10% containment, fire officials said. Some residents were forced to flee Monday as gusting afternoon winds drove the fire.

The Moose Fire in Idaho has burned more than 85 square miles (220 square kilometers) in the Salmon-Challis National Forest while threatening homes, mining operations and fisheries near the town of Salmon. It was 23% contained Tuesday, according to the National Interagency Coordination Center.

And a wildfire raging in northwestern Nebraska led to evacuations and destroyed or damaged several homes near the small city of Gering. The Carter Canyon Fire began Saturday as two separate fires that merged. It was more than 30% contained by Tuesday.

David Leitch Discusses Reasons for Not Returning to Deadpool 3

The Rotom Phone is finally getting a second camera

2022 On Pace To Be Even Deadlier Year In Philadelphia Than…