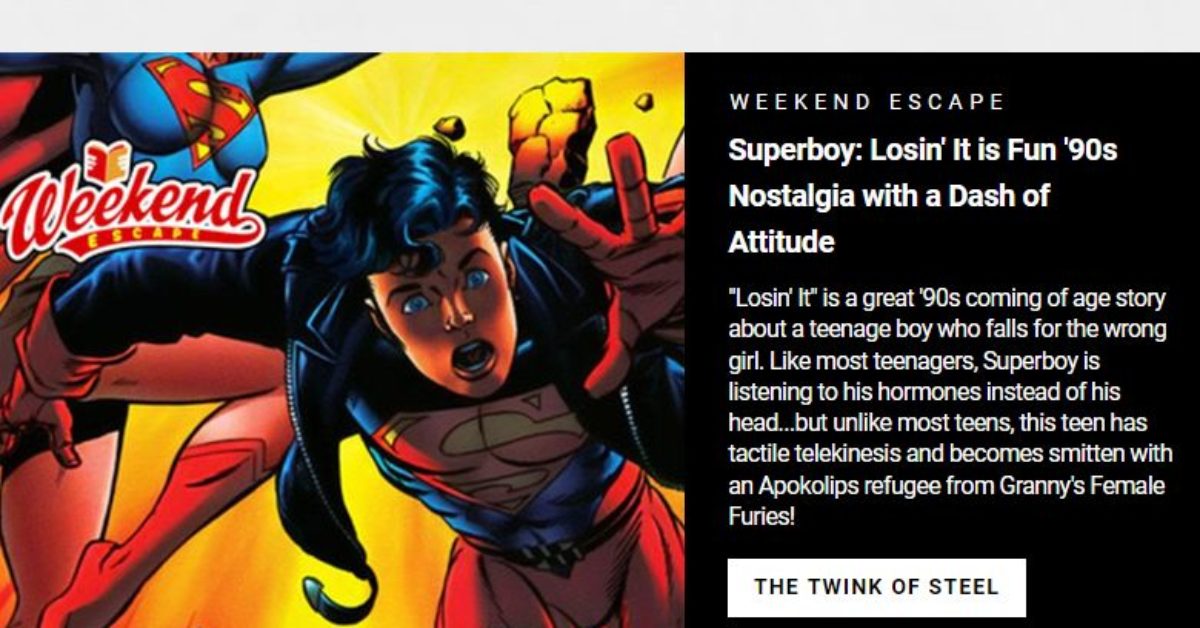 Next year, DC Comics is giving the nineties Superboy, Conner Kent, clone of Superman and Lex Luthor, celebrating his thirtieth year of existence, his own series. And in a website article by Joshua Lapin-Bertone promoting said nineties series, have dubbed him “The Twink Of Steel” in a mailshot that went out to DC Comics subscribers.

As a cishet man of the highest order, I thought it was wise to check in with Joe Glass, formerly of this parish, for a definition. “A twink is a young, hairless man, usually thin/skinny or in otherwise good shape.” I asked if there was still a presumption, as in some online definitions or being “a bottom” and Joe told me “not necessarily.” But he did clarify, “it should be noted that a potential caveat to my earlier description of twink is that it’s a young, hairless GAY man (or bi) This could come across as queer baiting, though Kon-El does have a very queer fan base, so may just be marketing to them.”

And let’s be fair, there has been a little bit of baiting regarding Conner Kent. His recent return to DC Continuity, initially saw him as a having a wife and kid in another dimension, revealed him to be playing the role of a widow’s husband. On the DC Comics blog back in September, Joshua Lapin-Bertone asked the writer of Tim Drake: Robin, Meghan Fitzmartin, “During the DC Pride: Tim Drake Special #1, there is a moment where Tim and Conner Kent are holding hands. So, the question is, are you trying to electrocute Twitter?”

Meghan Fitzmartin replied, “(laughs) I mean, who doesn’t love setting a fire under Twitter? That’s definitely something that I’ve heard about and am aware of and it will be more of a discussion point in later issues of certain comic brands that are happening right now.”

DC Comics outed Tim Drake last year after Bleeding Cool posted some serious speculation, naming the third Robin, or Red Robin, as a bisexual young man. It made a few headlines last year, alongside his new boyfriend, and classic Bat character, Benjamin Dowd. We’d already seen him have the talk with his former girlfriend, Stephanie Brown. And with Batman. But there are more conversations to be had in last week’s Dark Crisis: Young Justice #6, with Cassie Sandsmark, Wonder Girl of Young Justice, about her former relationships with Conner Kent and Tim Drake.

Cassie Landsmark and Conner Kent were an item until Conner’s death in Infinite Crisis at the hands of Superboy-Prime. Subsequently, Tim Drake and Cassie became an item – but then Conner Kent came back from the dead. At the time, it was portrayed that their relationship might have been a rebound for Cassie, but now it is being portrayed as a rebound for an unacknowledged relationship with Tim as well. At least on Tim’s part. There was plenty of fan commentary at the time, but this may be the closest this particular relationship – from Tim Drake’s perspective has gotten to canon… so far, at least. More to come? And will it be in the upcoming Superboy: The Man Of Tomorrow in April?

Superboy: The Man of Tomorrow by Kenny Porter and Jahnoy Lindsay, the 2022 DC Round Robin winner. “Determined to find his place in a strange universe, Conner Kent/Superboy leaves Earth behind. But his journey of self-discovery brings him face to face with a group of freedom fighters who challenge not just everything Conner stands for, but what it means to bear the Superman crest.” Here’s a page that was used to help promote the series and garner votes.

Is this really the Supertwink Of Tomorrow? Is TimKon on like Donkey Kon-El? Or will DC Comics decide never to use that name again?