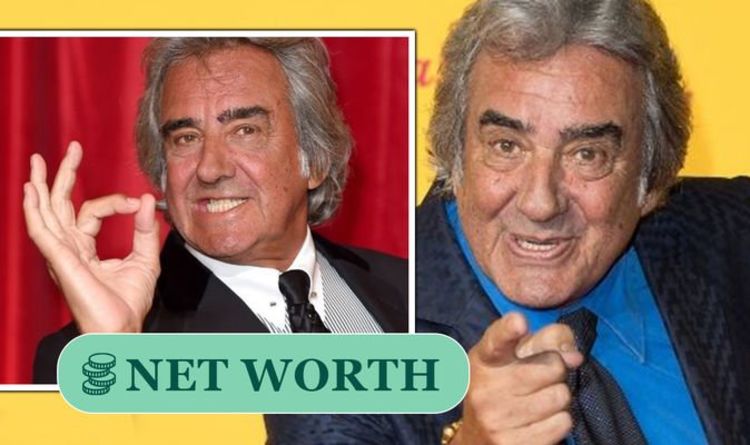 The 80-year-old moved to ITV in 2006 to present the eponymous show, Dickinson’s Real Deal, where members of the public either sell their antiques and collectables for valuation by an antiques dealer, or take a gamble and go to auction.

According to Idol Net Worth, David Dickinson has a net worth of $3million, which is approximately £2,211,000.

But he came from very humble beginnings, given up for adoption as an infant by his biological mother.

He was taken in by the Dickensons, a local couple in Cheshire.

The star actually spent three years in prison for mail-order fraud, at Strangeways in Manchester.

He told Keith Lemon in 2019: “Because I was a bit of a cocky little bugger, I got involved in fraudulent type activities, and I got sent to prison. And I deserved it.

“That put the fear of God into me, I didn’t want any more of that.”

Now a household name, with a career spanning 20 years so far, he reflected on the “horrendous” experience and advised young people: “Don’t go the wrong way, it will bugger your life up. I was lucky.”

Dickinson’s Real Deal is on its 17th series, and this success has brought David Dickinson his fortune.

What brought him his fame was presenting the popular TV show Bargain Hunt.

On his website, the star stated: “I began my TV career in 1996, but it was BBC Bargain Hunt which made me famous. I couldn’t understand it at first, I was just doing what came naturally but everyone seemed to pick up on my catchphrases such as ‘cheap as chips’ and ‘what a bobby dazzler’.

“I was delighted when the show won a National Television Award in 2002 and I was there to accept it.”

Since then he has had an array of TV appearances, namely as a contestant on Strictly Come Dancing in 2004 and I’m A Celebrity…Get Me Out of Here! in 2005.

David left Strictly in 7th place with dance partner Camilla Dallerup, and was eliminated third from I’m A Celebrity.

He wrote: “I was particularly honoured to appear on This is Your Life in 2002.”

David is married to Lorne Lesley, who he wed in 1968 after meeting her eight years prior when she was a cabaret dancer.

He adopted her two children, Robert and Katrina, from her previous marriage.

Also a proud grandparent, the TV star and family man certainly has people to spend his fortune on.

He also spent his money on a plush pad in Cheshire, costing £1.5million, according to The Mirror.

He and his wife briefly neighboured Colleen and Wayne Rooney.

Despite his millions, the star has remained humble, stating on his website: “I always keep my stately size elevens firmly on the ground and I remember my fans are the most important people in my career.”

SteamWorld is getting a city-builder, a puzzle game, and a…

Royal Mail set to increase costs of letters and parcels amid…

2022 Ford Ranger delayed by a month