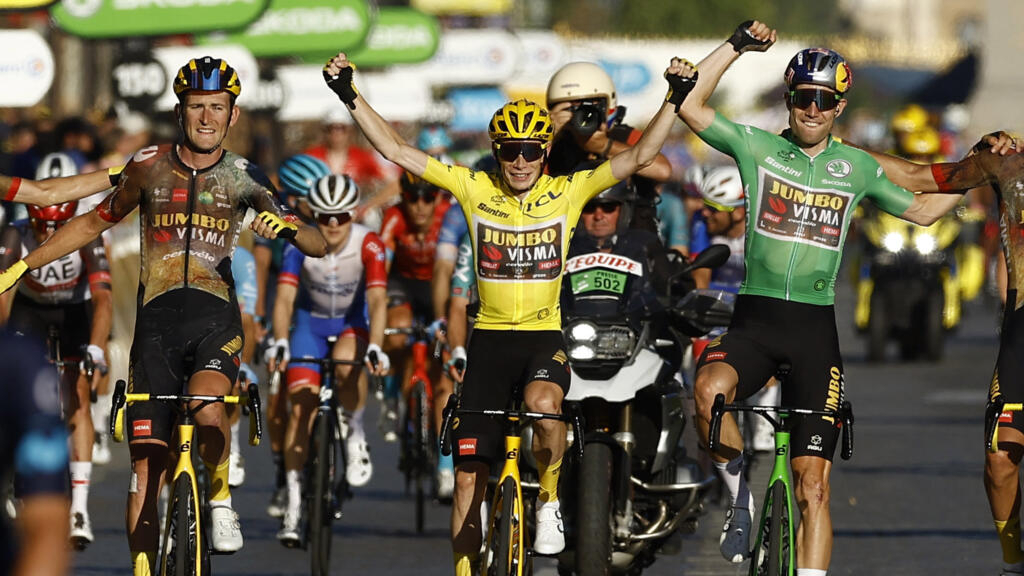 The 25-year-old former fish-market worker Vingegaard claimed his first Tour de France a year after his break-out performance when he came second to Pogacar in 2021.

Belgium’s Jasper Philipsen won the dash for the line on the cobbled Champs Elysees to take the iconic final stage victory.

The ecstatic Philipsen lifted his bike aloft at the finish line after taking his second win of this Tour, turning the page on his embarrassment at mistakenly celebrating on stage four, when he had in fact finished second.

Vingegaard and his Jumbo-Visma teammates all crossed the line together in a line and cheering wildly.

His Dutch team produced a brilliant collective effort with six stage wins, the green sprint jersey and the red combativity jersey for van Aert and the polka dot mountains jersey for Vingegaard as well as the overall title and yellow jersey.

After a relentless struggle over peaks and plains in a crushing heatwave, Vingegaard assured his win on Saturday’s time-trial having taken the lead in the Alps and extended it in the Pyrenees.

Defeated champion Pogacar finished second, won the best under-25s jersey for the third time and leaves this Tour with his reputation intact after attacking Vingegaard to the bitter end.

Geraint Thomas, the 2018 champion, was third after the veteran raced largely at his own pace, silencing doubters who thought that at 36, the affable Welshman was past his best.

The 21st stage was a largely ceremonial run as Vingegaard and others sipped champagne while rolling past sights of Paris including the Jardin du Luxembourg, through Saint Michel and past the Louvre before a sprint over eight laps of the Champs Elysees.

The Jumbo team had celebrated Saturday at their stop-over in Limoges but the triumph came after a long, collective effort that nearly fell flat at the last minute.

Vingegaard survived the “heart attack” of a near fall on Saturday’s individual time-trial to virtually wrap up the Tour.

The two main protagonists had fought each other from start to finish, with Vingegaard dethroning Slovenian Pogacar with a pair of soaring performances in the high mountains.

Pogacar made all the early running with his lone wolf attacking mentality, gradually clawing his way into top spot on stage six with an air of invincibility.

But the stars aligned against Pogacar when he lost teammates to Covid and injury. He is also a man known to dislike intense heat and temperatures hit 40 degrees during the final week of the race.

Vingegaard took the yellow jersey from Pogacar on stage 11 and while the UAE man refused stubbornly to give up, he lost further ground on stage 18.

Their epic struggle was highlighted by a moment of sportsmanship when Pogacar fell at high speed and Vingegaard waited for him to catch up, the pair clasping hands briefly in a memorable image from one of the best modern editions of the Tour.

Car Tech That Is A Total Waste Of Money