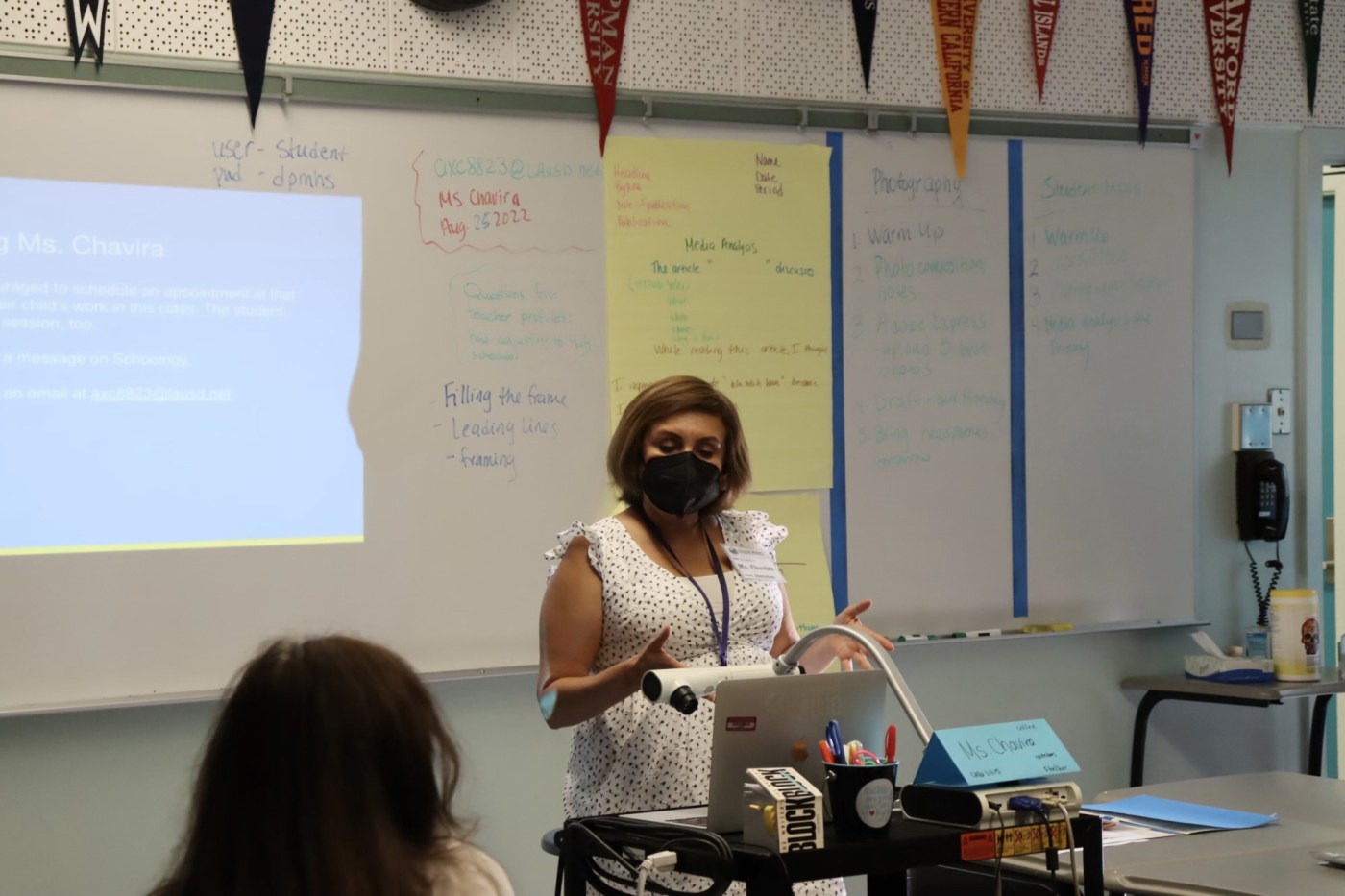 The father of the slain reporter whose name adorns Daniel Pearl Magnet High School and dozens of journalist organizations are calling on the Los Angeles Unified School District to rescind a decision to suspend the adviser of the school’s student-run publication for her refusal to remove the name of an unvaccinated librarian from a student’s article.

In a statement issued by the L.A. Press Club, Judea Pearl, the father of Daniel Pearl and the president of his namesake foundation, praised journalism teacher and adviser Adriana Chavira for inspiring her students and for her instrumental role in the school magazine’s award-winning reporting over the last decade.

“I don’t want her to face any disciplinary action for allowing her students to tell the truth,” Pearl said. “I only want what’s best for the students and the school, which is why I hope they will reconsider this decision.”

In November, the Pearl Post reported the library at Daniel Pearl Magnet High School in Lake Balboa was closed due to teacher-librarian Greta Enszer’s decision not to follow LAUSD’s vaccination mandate. It was one of many stories the students wrote during their coverage of the pandemic, Chavira said.

Enzser emailed Chavira after the article ran to request the removal of her name. But because the Pearl Post is a student-run publication and every editorial decision is made by the students, Chavira left the final decision up to the magazine’s staff, she said in an interview.

“My students are very serious, they’re dedicated,” she said. “They know it in the back of their minds that they’re at a school named after a journalist that gave up his life. So they always strive to meet those expectations.”

The students, after consulting with an attorney from the Student Press Law Center, responded to Enzser, explaining that they would not remove her name because it was newsworthy and they were within their rights to publish it. Following the return from the school’s winter break, Principal Armen Petrossian ordered Chavira to cut the name and warned she could face discipline for insubordination if she did not comply.

The administration accused Chavira of disclosing confidential information and cited the Health Insurance Portability and Accountability Act, or HIPAA, a law protecting the release of an individual’s health information by medical providers, insurers and health plan administrators.

Chavira and the students refused to comply once again. They hadn’t received any information about Enzser’s vaccination status from the district and HIPAA didn’t apply, Chavira said. School districts and employers are both exempt from HIPAA’s privacy laws, according to the U.S. Department of Health and Human Services’ website.

Chavira has advised the Pearl Post since 2009, the same year the school split off from the former Birmingham High School in Lake Balboa and received its name in honor of alumnus Daniel Pearl, a Wall Street Journal reporter captured and killed while on assignment in Pakistan. Now she fears she may be fired if her suspension sticks and the name isn’t removed by the time she returns.

She is appealing the disciplinary action, which is on hold pending a future hearing.

“We’re sticking with it,” she said. “There’s absolutely no reason we should take it down.”

Gabrielle Lashley, the Pearl Post’s art director, covered Chavira’s discipline for the magazine. The Post’s editors have worried about the possibility of Chavira facing discipline since the story ran last year, she said.

“We knew that we were within our rights and nobody wanted to take that story down,” Lashley said. “Ms. Chavira expressed that she knew the consequences for that and she wanted to do it anyway.”

Both Chavira and Lashley said they have been overwhelmed by the support from individuals and organizations at the local, state and national level.

“We all know she doesn’t deserve this and I’m happy that so many other people realize that as well,” Lashley said.

The Student Press Law Center, along with 22 organizations and individuals from the journalism industry, sent a letter to LAUSD Superintendent Alberto M. Carvalho on Thursday, Sept. 8. The letter penned by Executive Director Hadar Harris and co-signed by the others denounces the suspension of Chavira and urges Carvalho to withdraw the disciplinary action and expunge any mark on her personnel record.

“This rash and inappropriate disciplinary action directly violates California’s Student Free Expression Law, California Education Code Section 48907, a law on the books for nearly five decades, which was enacted and subsequently amended over the years specifically to protect student journalists and journalism advisers from what is happening now,” Harris wrote.

The Education Code explicitly provides student publications with freedom of the press, regardless of whether the district funds their work. The same state law further bars schools from dismissing, suspending, disciplining or transferring an employee for protecting a pupil exercising that freedom.

The three-day suspension without pay violates that provision, Harris said. The article “reported on a highly newsworthy topic at the time, was not obscene, defamatory or unlawfully invasive of anyone’s privacy rights,” he noted.

Harris stated that school officials effectively ordered Chavira to “break the law and she refused.”

“We find it deeply troubling that the journalism students at Daniel Pearl Magnet High School — which it must be pointed out was named after the heroic journalist for The Wall Street Journal killed by terrorists in Pakistan shortly after 9/11 — are learning first-hand about the perils of censorship at the expense of their beloved adviser,” Harris wrote.

An LAUSD spokesperson declined to answer specific questions about the matter and provided only a brief statement.

“While we are unable to address ongoing personnel matters, we will continue to support our students and their journalistic endeavors at Daniel Pearl Magnet High School while also respecting the concerns of our school community,” the statement read.

This Is The Only MG EX234 Prototype Roadster Ever Made