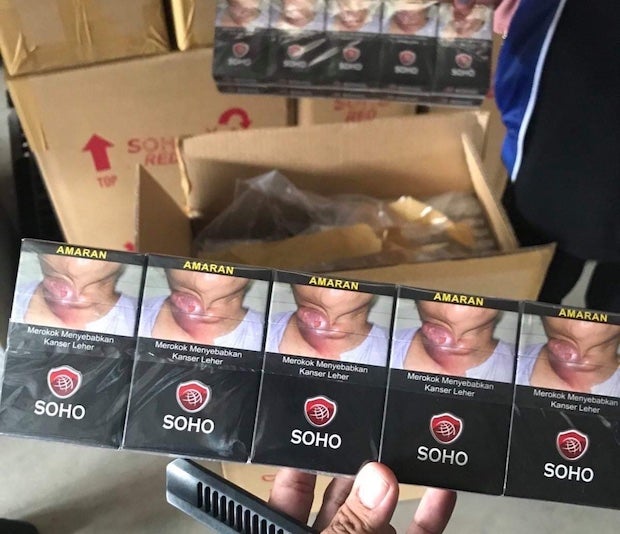 The confiscated Two Moon cigarette packs did not carry information required by law such as country destination, details of manufacturer and tax stamps as proof of payment. Mastercases in the background are unmarked also contrary to requirements by law that the boxes must bear the cigarette brand name.

MANILA, Philippines — The Bureau of Internal Revenue (BIR) is worried that it may find it hard to prove the guilt of a suspected illicit trader because of an order issued by the Court of Tax Appeals (CTA) for it to return fake cigarettes it had seized in a raid, according to a statement issued on Wednesday.

“We are concerned over possible tampering of evidence. The seized products and equipment forms part of the body of evidence to support our case in court,” a BIR field official, who was not identified in the statement, said.

Agents of the BIR and the National Bureau of Investigation (NBI) seized the cigarettes, along with some manufacturing equipment, in a raid they conducted on July 29, 2020, at a facility owned by GB Global Exprez Inc. at the Angeles Industrial Park in Pampanga.

The raid yielded 238,300 packs of Two Moon and Soho brands supposedly for export to Thailand. The packs, however, did not comply with the legal requirements to include in labels of the intended destination country and details about the manufacturer. The packs also did not have tax stamps as proof that excises taxes had been paid.

Because of the violations, the BIR ordered the seizure of three cigarette-making lines and two cigarette-packing lines at GB Global.

BIR officials also expressed alarm over the CTA injunction as it also directed the agency to withdraw security personnel from the BIR commissioners’ office from the padlocked warehouse of Global.

The BIR filed a motion lates last year asking the CTA to reconsider the injunction order.

In its motion for reconsideration, the BIR said the CTA’s jurisdiction is to issue suspension of collection of taxes and not to issue prohibition against BIR personnel in the exercise of its police powers as stated in Section 11 of Republic Act 1125 otherwise known as An Act Creating the Court of Tax Appeals.

The BIR stated that the enforcement involves an administrative action and the exercise of the agency’s regulatory function and that no tax assessment was involved in this case.

This is an offshoot of BIR’s effort to curtail the proliferation of the illicit cigarette trade in the country in response to the government’s all-out campaign to go after illicit traders, BIR said in its filing.

The BIR cited Section 15 of the National Internal Revenue Code (NIRC) that vested revenue officers an authority to make arrests and seizures. Thus, in this case, it was simply enforcing its regulatory function.

The BIR and the Department of Finance is going hard against illicit cigarette traders after it shut down the fraudulent business practices of Mighty Corp. that cost the government billions of pesos in excise taxes.

It was the biggest tax settlement forged by the government with Mighty forced to settle the tax delinquency at P30 billion. The owners of the company also had to sell their interest to an international cigarette company.

Based on Securities and Exchange Commission data, the BIR pointed out that ex-Mighty General Manager Greg Lim and Benson Chua are the biggest shareholders and directors of GB-BEM and GB Global.

Finance Secretary Carlos Dominguez had pushed for an intensified campaign against illegal cigarette trade, saying he expects illicit trade to soar due to higher excise taxes. He said the BIR and BOC must “intensify surveillance and enforcement” against the manufacture and sale of illegal local cigarettes and smuggling of imported counterfeit products.

The BIR totaled the seizure to 1,656,880 cigarette packs which were not registered with the revenue agency and not having the proper license to operate.

A statement by the Department of Finance (DOF) last April 6 said the BIR shut down the factory of GB-BEM because it was manufacturing cigarettes without the necessary permit to operate.