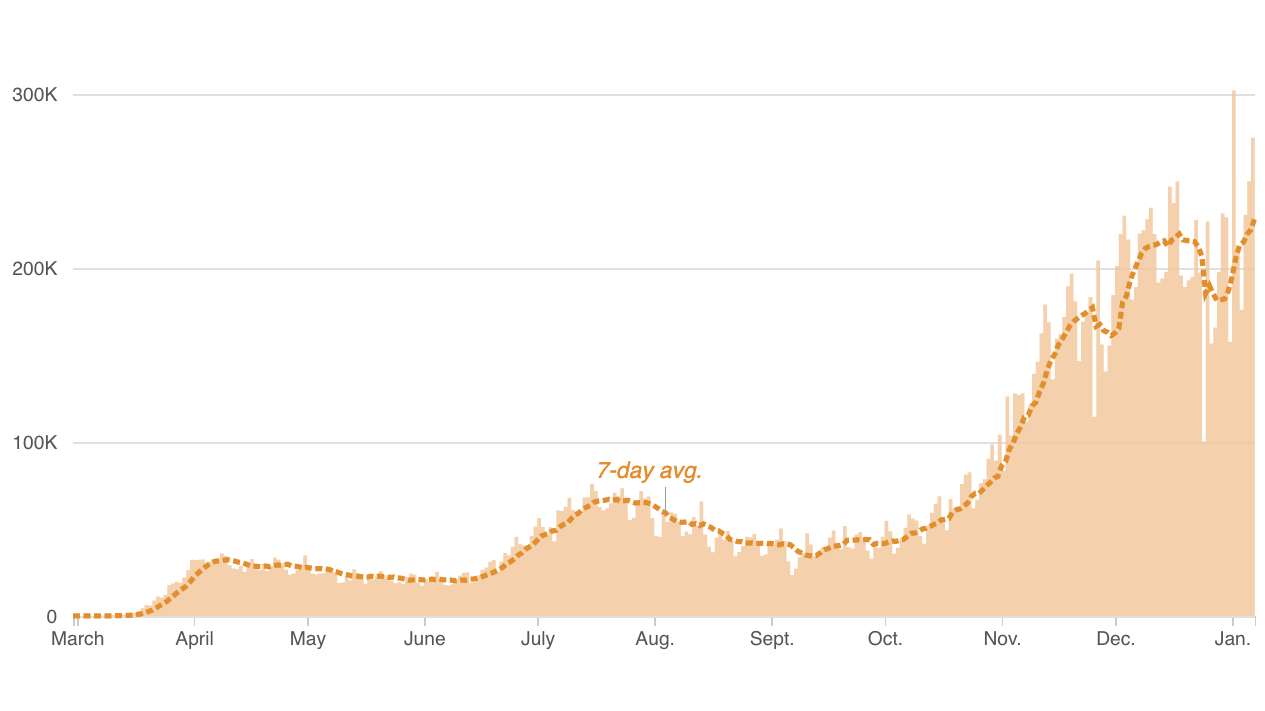 This page is updated regularly.

More than 22 million people in the U.S. have had confirmed coronavirus infections and more than 375,000 have died of COVID-19. Tens of thousands of new cases are reported daily nationwide. In the graphics below, explore the trends in your state.

View the data via a heat map (immediately below), curve charts, a table of state-by-state trends over four weeks, or a map of total cases and deaths.

The map above shows the risk of infection in each state based on new daily cases per capita. The consortium of researchers and public health experts who developed these risk levels advises states in the red category to issue stay-home orders. They advise orange states to consider stay-home orders, along with increased testing and contact tracing. Yellow states need to keep up social distancing and mask usage, and all states should continue testing and contact tracing.

To compare state outbreaks, the chart above graphs trend lines for average new daily cases and deaths against each state’s totals to date. This type of visualization highlights a state’s daily growth or decline relative to the overall size of its outbreak.

When both new and total case and death counts grow quickly, the curves bend upward. As new cases and deaths slow, the curves level or bend down. In New York, the curve rose sharply before reaching over 170,000 total cases in April. New cases fell from about 10,000 per day in mid-April to under 900 a day most of the summer, before starting to rise in the fall.

Explore the map above to see totals and per capita figures around the country for both new confirmed cases and reported deaths from COVID-19. New York was the original epicenter of the pandemic in the U.S. As of mid October, California, Florida and Texas surpass New York for total cases to date, though New York still has the highest death total.

Click here to see a global map of confirmed cases and deaths.

To show trends, the table below shows the change in average new cases per day in each state, week over week for the last 28 days. States marked in shades of red have growing outbreaks; those in shades of green, are declining.

The graphics on this page pull from data compiled by the Center for Systems Science and Engineering at Johns Hopkins University from several sources, including the Centers for Disease Control and Prevention; the World Health Organization; national, state and local government health departments; 1point3acres; and local media reports.

The JHU team automates its data uploads and regularly checks them for anomalies. This may result in occasional data discrepancies on this page as the JHU team resolves anomalies and updates its feeds. State-by-state recovery data are unavailable at this time. There may be discrepancies between what you see here and what you see on your local health department’s website. Figures shown do not include cases on cruise ships.

Fluctuations in the numbers may happen as health authorities review old cases and or update their methodologies. For example, in early June, Michigan health authorities started including probable cases in its totals. This resulted in a brief spike in the state’s daily numbers until the JHU team was able to reconcile the historical data. On June 25, New Jersey included 1,854 previously-unreported probable deaths in its totals, resulting in a spike in the state’s daily death numbers. On Sept. 2, Massachusetts changed its methodology for counting probable cases, which lowered its overall case and death numbers. The JHU team maintains a list of such changes.

This story was originally published on March 16, 2020. Elena Renken was a co-author on that version.

Our feverish universe is getting hotter every day