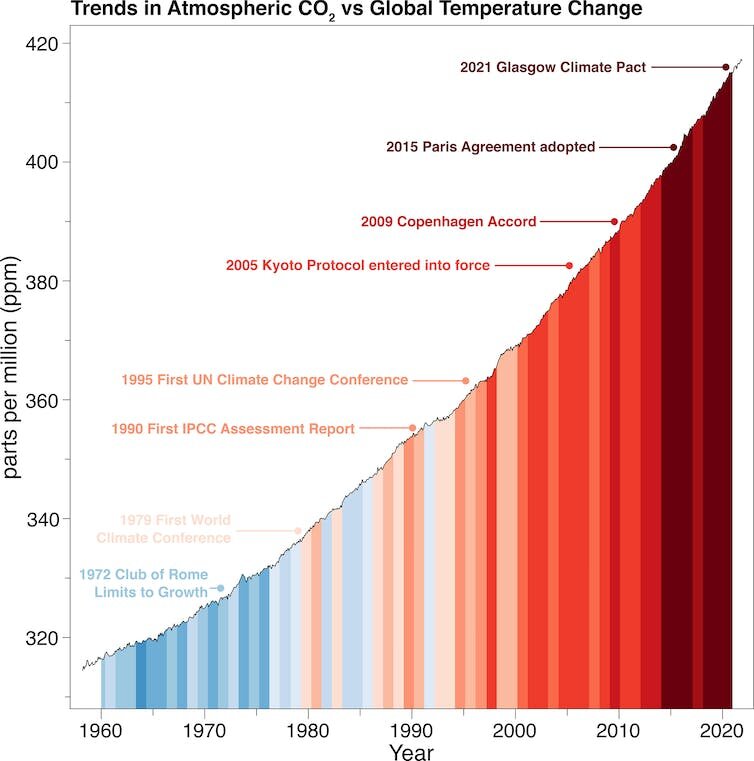 Billed as “Africa’s COP“, the 27th UN climate change summit (otherwise known as COP27) in Sharm el-Sheikh, Egypt, was expected to promote climate justice, as this is the continent most affected but least responsible for the climate crisis. Negotiations for a fund that would compensate developing countries for the loss and damage that climate change has wrought dominated the negotiations. In the early hours of Sunday morning, well past the Friday deadline, member states agreed to establish such a fund—a win for developing countries.

However, who will pay and how this financial assistance will be delivered to help countries like Pakistan recover from climate disasters remains to be negotiated next year.

The COP27 agreement failed to go beyond the 2021 Glasgow climate pact’s promise to “phase down unabated coal power”, despite the Indian proposal that all fossil fuels should be phased out. The text also announced no new targets or commitments, threatening the goal of limiting global temperature rise to 1.5°C, established seven years ago in the Paris agreement. Instead, there was a request for new country pledges, or nationally determined contributions (NDCs), for COP28—another year’s delay.

Developing countries entered COP27 hoping for progress on three fronts: climate finance and the delivery of US$100 billion (£84.6 billion) a year as promised in 2009, global decarbonisation, and recognition of the responsibility of developed countries to pay for loss and damage. Only one of these was achieved to any degree.

So why did COP27 fail? And what can be done before the next summit—COP28 in Dubai—to ensure progress?

COP27 was overshadowed by Russia’s war against Ukraine, which has strained pipeline supplies of gas, prompting many countries to expand domestic fossil fuel reserves.

The invasion meant that oil and gas-producing nations became more influential at COP27, undermining the negotiations. World leaders preoccupied with spiraling energy prices and the escalating cost of living were reluctant to act boldly on fossil fuels. This was reflected in the watered-down text in which the Egyptians slipped in a provision to boost “low-emission and renewable energy”, which is a nod to natural gas (cleaner than oil and coal but still a fossil fuel).

The timing of COP27 was unfortunate. Week one occurred during the US midterm elections when much of the world’s media was scrutinizing its finely balanced outcome. Week two coincided with the G20 summit in Bali, which further diverted attention and meant many world leaders did not attend.

To make matters worse, negotiations stretched into the weekend, just when attention turned to the World Cup and associated controversies in Qatar. This is very different from COP26 when the world remained engaged throughout the summit.

The only protests allowed were those sanctioned by the Egyptian security forces within the venue. With media attention already restricted, the limited but important civil society presence at COP27 struggled to keep pressure on the hosts.

During the summit, the movement of local residents was restricted by numerous road checkpoints. Holding a COP meeting in a military dictatorship in a region of the country where security is tightly controlled and the local population are oppressed and scared was probably always going to hinder effective negotiations.

International diplomacy is difficult and takes a huge amount of time, effort and skill. The reason why 2021’s COP26 in Glasgow yielded agreements on deforestation, methane emissions and other issues was partly because the UK and Italian hosts worked hard to build consensus during the extra year provided by the pandemic.

Egypt’s presidency of COP27 underestimated this task. When the negotiations carried over to the wee hours of Sunday morning, Egyptian COP27 president, Sameh Shoukry, said: “It is really up to the parties [countries] to find consensus.” This is in stark contrast to COP26, where the president of the conference, Alok Sharma, fought to the bitter end to secure an agreement. Negotiations were only ramped up in the last 48 hours to get an agreement on loss and damage, and even then, some of the larger emitters (China and India) have refused to contribute to the fund.

The biggest failure was the lack of trust. This is primarily because the US$100 billion promised per year has yet to fully materialize. This is a relatively small amount of money when you consider Qatar has reportedly spent $220 billion alone to host the 2022 World Cup. Money to support climate change adaptation has also not been forthcoming. The money is there, the issue is the will to allocate it where it is really needed.

And the biggest sticking point was over loss and damage. At COP26, the US, EU and UK, with support from China, blocked the setting up of the Glasgow loss and damage facility, as they did not want to be liable for the effects of climate change.

In Egypt, a statement was released at the last minute saying that such a loss and damage fund would be set up after all. It’s a step in the right direction and was celebrated by developing nations. But there was no agreement about how large the funding stream would be, who pays, and critically, who controls and manages these funds. Currently, only 10% of climate finance reaches local communities and the new facility will need to address this disconnect.

Countries like China and India pushed back on contributing to those funds. India resisted the inclusion of terms such as “current high emitters” in the text as it expects historically high emitters to contribute to the funds. This may have also been the case for China 30 years ago. But now China’s historic emissions are nearly as high as the EU’s, so it points to per capita emissions and has restated its status as a developing country.

There are several lessons for COP28 and Dubai. First, start the negotiations now and work hard for the next 12 months so that all countries are prepared to get a clear agreement by the end. And the next COP must run an open and transparent process so all countries understand what is being negotiated and trust can be repaired.

In Dubai, countries with relatively unambitious pledges must be pushed to increase their commitments so there is a chance of sticking to the 1.5˚C limit with a focus on phasing out fossil fuels.

Finally, high-income countries and wealthier emerging economies must contribute to adaptation funds and a transparent and effective loss and damage facility. As an African COP, COP27 wanted to center the negotiations around climate justice. This idea will need to be at the heart of COP28 negotiations, as money will need to be put on the table for adaptation, loss and damages and a rapid ramp-up of renewables.

Final Action-Packed Trailer Out, James Cameron Reveals Challenging “Threshold” for the Movie to Be Profitable