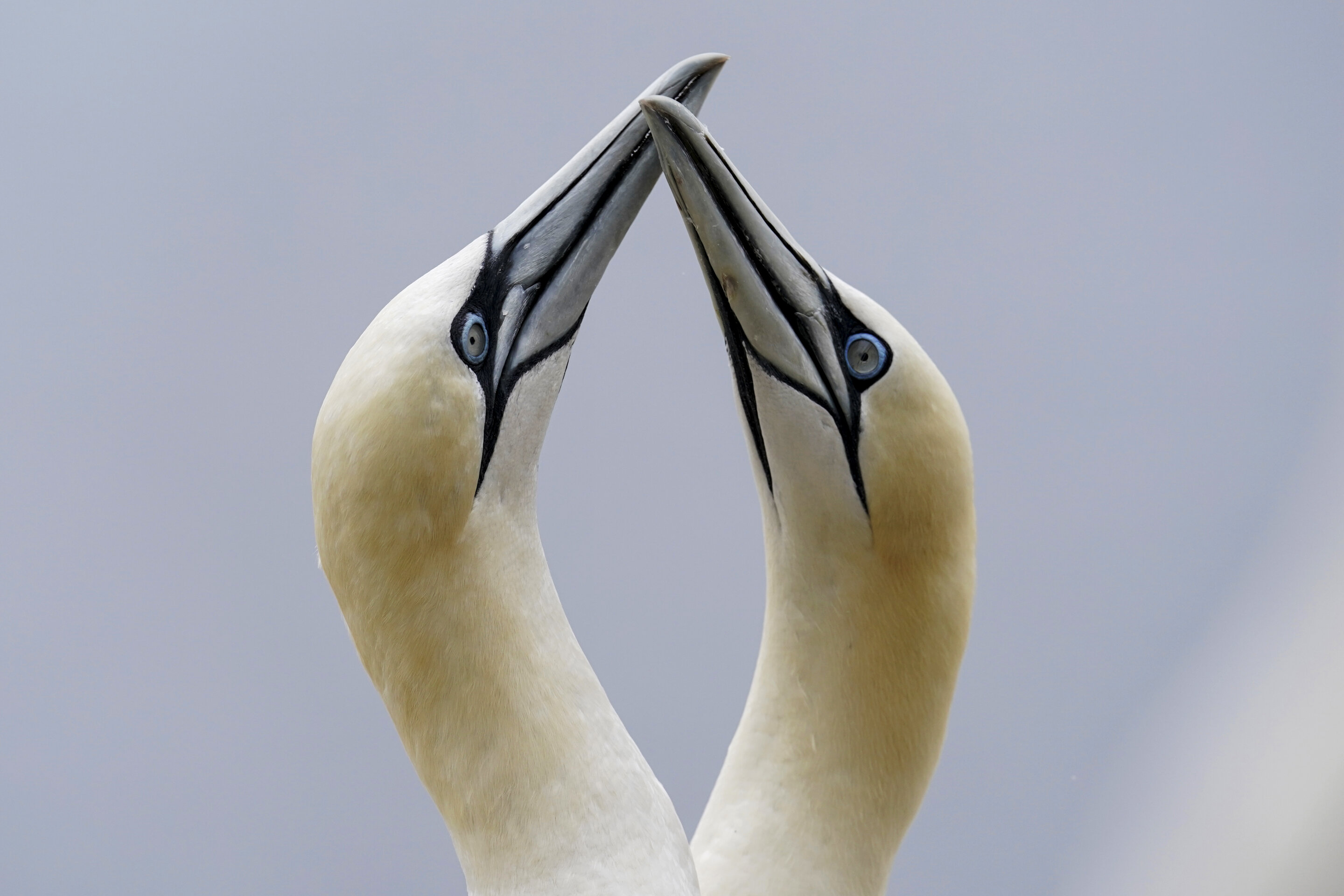 On Quebec’s Bonaventure Island, the ghosts of human habitation from years past and the birds that breed there now in extraordinary numbers tell the same story: of lives lived hard in a place of fairy-tale beauty.

You see this from the tender ages on the family gravestones of islanders who scratched out a living from the late 1700s to when Bonaventure went entirely to the birds a half century ago.

You see it from the tenacious colony of 100,000-plus northern gannets as they plunge into the sea for prey, soar back to their nests and fight at the least provocation, sometimes to the death, for their territory on a plateau high above the waters or in crannies of the cliffs.

Nothing is easy for the gannets. Not in this age of warming seas, competition with trawlers for fish, pollution, supercharged storms and the onset of avian flu.

That’s especially so when those perils are combined with their curious compulsion, shared by many seabirds, to return each spring to the exact spot they left the year before. For these spirited divas, the next nesting spot over just won’t do.

Worldwide, it remains difficult or impossible to tie any one massive die-off of seabirds or breeding calamity solely to global warming, for nature has its own jarring rhythms.

But the evidence writ large, is unassailable: Warming and rising seas and the erratic weather events fueled by a changing climate are taking a heavy toll. Researchers have estimated seabird populations have fallen as much as 70% since the mid-20th century.

The struggles of many seabirds occur far from humans. Those of the Bonaventure gannets, however, play out in plain sight, on the protected grounds of the Quebec government’s Parc national de l’lle-Bonaventure-et-du-Rocher-Perce.

There, the gannets display a “clumsy and funny little side on land which has nothing to do with what it is when it is at sea,” said David Pelletier, a leading Quebec researcher of the birds.

At sea the gannets are magnificent in their grace and power.

They fly effortlessly high over the sea and dive nearly straight down in their hunt for fish, piercing the surface like so many white missiles. Their black-tipped wings, which span 2 meters (6 feet), are tightly tucked behind them.

They dive in huge numbers near the island when mackerel—the prey that gives them the most energy—or herring or other smaller fish are abundant there.

It’s a sight that amazes even the most seasoned scientists. “It’s so wow,” said Magella Guillemette, a pre-eminent gannet researcher at the University of Quebec in Rimouski, as he described watching the feeding frenzy from his small boat in the thick of it.

With the island less than 3 kilometers (under 2 miles) from the Percé harbor, these birds are remarkably accessible to biologists and visitors who hike on trails thick with wildflowers in summer to see the birds up close.

Unlike many other seabirds, the gannets seem utterly indifferent to humans. They gaze right through you with their porcelain blue eyes.

“It’s rare that we have the possibility to look at wild animals like this,” said Marie-Dominique Nadeau-Girard, the park’s services manager. “And they stay there, they don’t look at you, they live their life, and you’re just looking at them and learning.”

All of this makes the Bonaventure gannets ideal sentinels for the health of the marine ecosystem in the gulf. They form the world’s second largest gannet colony and are easier to reach than the largest, on Scotland’s remote Bass Island.

Quebec and global scientists say climate change is surely reshaping the lives of the northern gannets. Warmer sea temperatures drive their prey to cooler depths, distant waters or both.

But the full impact of climate change is not yet established and overfishing may be an even greater danger.

In tandem, the threats from fishing and warming force the gannets to go farther afield in search of food for their island chicks and themselves. The distance the birds fly on a single fishing trip has more than doubled in recent years to an average of 500 kilometers (300 miles), leaving one mate and the chick waiting several days or longer to be fed by the hunter, says Guillemette.

If the mate on the nest gets too weak from hunger, it may fly off for food, too, leaving the young one to starve or to wander from the nest and risk being killed by an adult. Like many seabirds, adult gannets may kill any intruders to their nesting areas.

Researchers have been able to draw a strong correlation between the supply of mackerel in the gulf and the number of chicks produced. In 2012, when there were almost no mackerel, only 4% of the nests produced a chick, Guillemette said, a record low attributed to unusually warm waters that year.

Over winter, northern gannets live dispersed on the water—along the Atlantic coast from Maine to Florida, some even in the Gulf of Mexico. But mates reunite year after year on their breeding grounds, for 15 years or so, producing one chick each season.

They have a monogamous nature and an elaborate means of communicating mate to mate. In gannet-speak, a beak turned skyward signals it’s time to go forage; mates clacking their bills together as if in a swordfight signal a welcome home after the hunt.

The nests are only 80 centimeters (30 inches) apart, center to center. At certain vantage points, the colony appears as an endless carpet of white, dotted with the dark-feathered young ones.

By the time of the southern migration in fall, the young are fattened up, weighing 1 kilogram (over 2 pounds) more than their parents.

There are no training wheels for the portly juveniles. Instead, lots of practice beating their wings on the ground, followed by a departure from the cliffs that is part flight, part plop.

If they survive that, the journey south will teach them their grace and power on the wing and into the deep.

Restoring Iran’s internet, and justice for a Chinese-American scientist